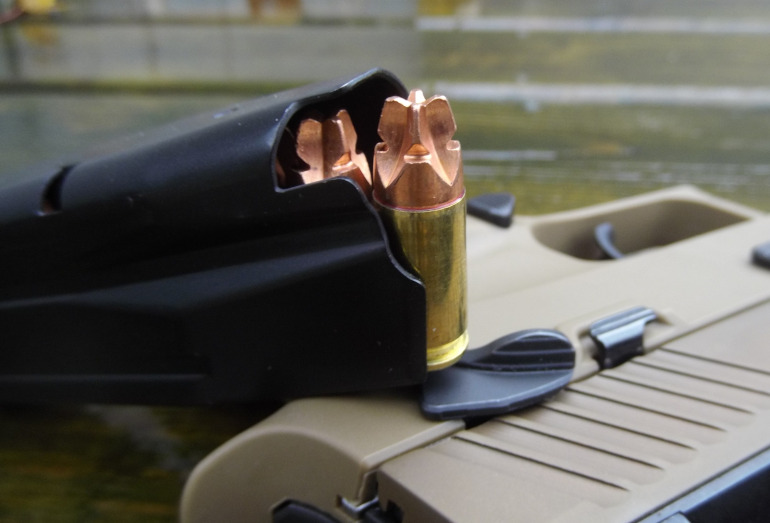 We are living in an era in which 9mm is king in terms of popularity and widespread availability. There is a large number of reasons for the success of the cartridge, among them low recoil and even lower cost. In this article we will be looking at some of the best 9mm self-defense loads around today and the ideas behind them.

Despite its widespread popularity, both among law enforcement and the general public, there are plenty of opinions out there that the 9mm isn’t really an adequate self-defense cartridge. I hear this regularly, but it’s mostly incorrect. The modern 9mm is a different animal when looked at in comparison to its original, anemic European military forebears. The 9mm has benefitted remarkably from technological advances, especially those of the last two decades.

To understand what makes for good self-defense ammo, whether for concealed carry or home defense, we first need to look at what qualifies ammo as generally inadequate. There’s no such thing as a non-lethal bullet, despite what you may hear on internet forums and guys hanging around the counters in gun shops. A nineteen-cent 115gr 9mm ball ‘practice’ load will easily kill a person just as dead as a five-dollar-a-shot custom frangible round. Respect must be given where it’s due, and all bullets must be respected for what they are.

That said, the typical cheap 115gr ball load probably isn’t what you want to have in your gun. If it’s the only thing you can get or can afford, then you had best practice with it and understand what it does well to give yourself the greatest advantage in a bad scenario. I know a number of people who carry ball loads in their gun, and they always seem to catch sideways looks for it from other regular carriers.

The reason I often hear for this is that 9mm offers poor terminal performance to begin with and ball and FMJ loads will simply icepick their way through a bad guy with little to no actual damage occurring on entry or exit. This is, of course, generally false, but like all incorrect “conventional wisdom,” there’s a kernel of truth in there. The 9mm FMJ is great at penetrating tissue and often completely exits, which is seen as a danger by many people, thus bringing about all sorts of frowns.

Over-penetration can indeed be a danger to bystanders, which is a valid point, but is essentially uncontrollable. No person can, with 100% certainty, say what any given bullet will do in a specific scenario. You can have over-penetration with hollow points, and you can miss completely with your most accurate loads. To say that the possibility of over-penetration is a negative while ignoring the near certainty of missing while under stress is hyperbole.

That brings us to the point in the conversation where we talk about what makes a good self-defense load. The problem with many 9mm FMJ rounds isn’t that they fail to penetrate, it’s that they fail to deliver significant terminal performance. The wounds delivered by FMJ and ball loads tend to be narrow, which should come as no surprise because they lack the ability to expand in tissue. 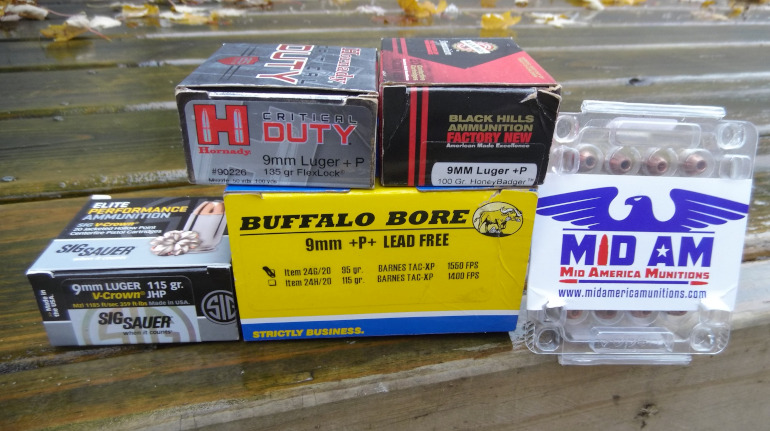 The hollow point round is the remedy for this. These’re designed to expand, opening up in soft tissue and delivering greater energy into the target than a non-expanding bullet. Hollow point-type bullets take on many forms and often use very specific types of materials and means of expansion. Most people who carry self-defense loads in 9mm choose some type of hollow point.

There are several variations of hollow points that are excellent for self-defense. The first of these is the ‘traditional’ Jacketed Hollow Point (JHP).

SIG SAUER has released a line of ammunition that features their excellent V-Crown bullets. These are a somewhat modernized take on the JHP and feature minor variances depending on what type of ammo you buy.

Their 365 carry ammo, for example, is designed for short barreled guns like the P365 micro-compact pistol, an innovative new 9mm carry gun. The bullets are designed to expand at lower velocities while producing less recoil than standard 9mm loads, thus making it easier to fire in a smaller gun. SIG makes a large variety of 9mm loads and based on my testing, I would heartily recommend them to anyone looking for affordable, reliable ammo.

A twist on the JHP comes in the form of the very popular Hornady FTX and FlexLock bullets. These bullets were designed to address the problems associated with penetrating materials and heavy clothing. The bullets have a polymer filler in the tip that allows them to pass through said materials and fabric without clogging up. Clogged hollowpoints have a hard time opening up and if they fail to open, they often fail to deliver critical wounds. The FTX and FlexLock technology can be found in a number of Hornady products, most notably their Critical Duty and Critical Defense loads. The FBI recently chose the Critical Duty 9mm 135gr +P FlexLock as their standard load.

Yet another deviation in terms of self-defense 9mm ammo comes in the form of what can broadly be called ‘non-traditional’ expanding bullets. These are bullets that are often radical in appearance and are made from homogenous metals. I recently wrote a review on TTAG about the Mid America Munitions 124gr Broadhead load. This is an expanding bullet that is entirely lead-free. It is pre-cut to open into six blades which deliver devastating performance. I was very pleased with this and I have continued looking into the potential of these bullets.

A variation on the lead-free expanding bullet comes in the form of the Buffalo Bore 95gr +P+, also reviewed here on TTAG. This load is an example of what can be accomplished with alloys lighter than lead. The bullets here exit the gun at a blistering 1500fps+, which is astounding. The bullets are also exceptionally tough and can deliver dramatic performance on target.

The last type of 9mm self-defense ammo I will talk about is one that doesn’t expand. You may be wondering why I would include non-expanding bullets on this list when I went through the effort to explain why they are risky to use, but this last entry shows how technology can change things.

Black Hills makes a line of ammunition called the HoneyBadger, which features radically shaped, lead-free bullets that maintain effectiveness through tissue displacement and penetration, not expansion. You can find my review of the 100gr +P HoneyBadger here.

The shape of the bullets allows them to easily punch through fabric and materials. Unlike hollowpoints, these bullets can’t get clogged and will do their job as long as they are still spinning. I personally love this type of bullet and would certainly recommend it as a self-defense option.

Today’s technology has opened a great number of doors for the 9mm. The discerning shooter and concealed carrier has their choice of dozens of options from a full spectrum of manufacturers. Self-defense ammo needs to be reliable and accurate, and all of the above rounds I listed are great choices. You should try out several types to decide what it is that you feel comfortable with in your own gun.

For more information on the brands and products listed here, check out my ammo reviews here on TTAG or visit the makers at www.sigsauer.com, www.hornady.com, www.buffalobore.com, www.midamericamunitions.com, and www.black-hills.com.