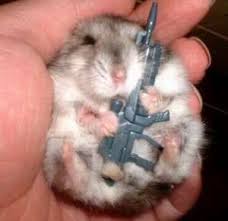 The more I learn about guns, the more I realize I have to learn. Case in point: mouse guns. I come to the party from the (initial) point of view of a large caliber fanboy. Give me .45 ACP or give me (the likelihood of) death was my frame-of-reference. Don’t get me wrong – I’m still convinced that .45ACP is a superior caliber for my needs, but I’m coming around to the idea that there’s room in my arsenal for other calibers, and by extension, other guns outside the family of 1911s. Hence my growing interest in the lowly mouse gun.

I’m not sure who coined the moniker “mouse gun.” Possibly, the same wag that came up with “mom-mobile “for the venerable minivan. Which is unfortunate; both terms are pejorative in the extreme. A mouse gun, after all is supposed to follow the adage “good things come in small packages.” If a 1911 is a challenge to conceal, and your typical Glock is equally cumbersome in summer togs, something that’s smaller would by definition be easier to conceal, no? Well, sure. But at what cost?

Early mouse guns were the very definition of compromise, if by “compromise” you mean “the fine art of nobody getting what they really want or need.” You’d typically trade capacity, caliber, and (forgive me) stopping power for the ability to conceal the gun. So your choice was between a gun that would allow you to defend yourself, but was all but impossible to conceal without wearing a lot of clothes, and a gun that would be easy to conceal, but largely useless for personal defense.

But while the original mouse guns (.22s, .32s, and the like) were anemic and largely useless, the category seems to be on a trajectory that is moving towards small + powerful. If last year saw mouse guns evolve to .380s, 2011 is bringing with it a new batch of slightly-larger-yet-still-concealable jobs with the (relative) power of the 9mm Parabellum cartridge.

The Kimber Solo, the Ruger LC9, the Sig P290 and the Kahr CM9 are all new, and all go for a smaller-frame weapon, featuring the 9mm load. These guns all share common features – principally a slightly larger frame than a typical mouse gun (but still easily-concealable) and the larger caliber.

This, of course, doesn’t mean the search for the Holy Grail of concealment + power is at an end. Let’s just say that physics can be a cruel taskmaster. Remember, the smaller/lighter the gun, the more bite, in the form of felt recoil. Then, too, there’s the problem of a short barrel = less escape velocity and reduced accuracy. These factors combine to make a gun that’s fine for personal defense that’s up-close and, well, personal. But they also make it (a lot) less appropriate for being capable of a less-than up-close and personal distance to the threat.

For my money, if they can build a 9mm pocket gun, can one chambered in .40 S&W be far behind? Not sure if that would make for a better gun, but I’m of the opinion that the .40 is the compromise caliber of choice between a 9mm and a .45 ACP. And I’d be a lot more likely to invest in a pocket gun in .40 than a 9. Just my own bias showing, but I’d rather deal with learning how to control a .40 than hoping that a 9mm will keep me alive in a life-or-death situation. (Those of you that are fans of the 9mm, let’s just agree to disagree, shall we?)

One last thing. I’d recommend that the mouse gun manufacturers  spend some time (and money) pitching their creations as anything BUT a “mouse gun.” Perhaps they should take a page from the automobile manufacturers marketing mavens (say that, three times, fast) and go for something that sounds a bit more manly. Maybe create a new class between “mouse gun” and “full size.” Call it, um – “Pocket Rocket.”

Now THAT I can get behind.