Gun “buybacks” are security theater. They’re a deeply cynical ploy by politicians — aided and abetted by craven cops and misguided men and women of the cloth — to make it look like they’re “doing something about gun violence.” And that’s just the good bit. These “no questions asked” turn-ins create a black market for stolen guns, encouraging criminals to steal guns. But they’re always deemed a “success” because . . .

Americans are ready, willing and able to surrender broken-ass guns in exchange for gift cards or cash. In the case of last weekend’s St. Louis “buyback,” so many Missourians wanted  for their old, unloved, unused firearms that the $125k on offer was gone in hours. Or was it? I make that $111,450, some $13,550 short of stumped-up by “the Bar Association of Metropolitan St. Louis, along with individuals and some companies.” Maybe not the “huge success” the “community leaders proclaimed”?

After the couple waited in the cold for more than two hours, officials began turning people away unless they had assault weapons or wanted to donate their guns.

Don’t you hate it when black gun prejudice rears its ugly head? 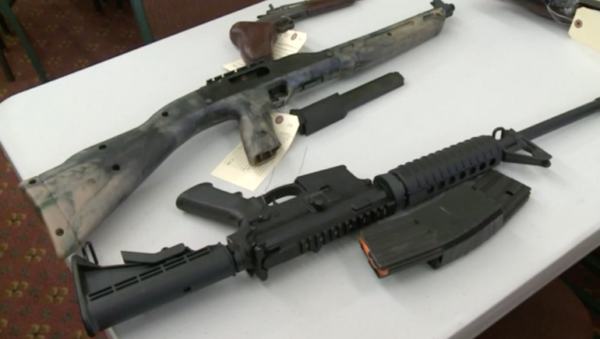 Anyway, this “gun buyback” thing is so transparently stupid, even the media is beginning to tire of it. Check out how kansascity.com ends their article:

Mayor Lyda Krewson said the strong turnout “speaks to, first of all, how our community is awash in guns and how difficult that makes our police officers’ job. It also speaks to the good people of this community who went to their basement or garage and said I don’t want this gun to fall into the wrong hands.” Public Safety Director Jimmie Edwards (above) was pleased that many of the weapons were from St. Louis city.

But many of the people in Saturday’s line were not from the city, including Kent Oxman, who works at a pawn shop in St. Charles County and was there to sell a dozen guns.

“The gangbangers and criminals, they aren’t going to turn their stuff in,” Oxman said. “They are still sleeping.”