First, let me just say that I think ODIN Works released a handful of other brand new products at SHOT Show this year, too. Unfortunately I was speed walking by their booth for a scheduled meeting when these suppressors caught my eye. A full-on Looney Tunes double take ensued, and . . . 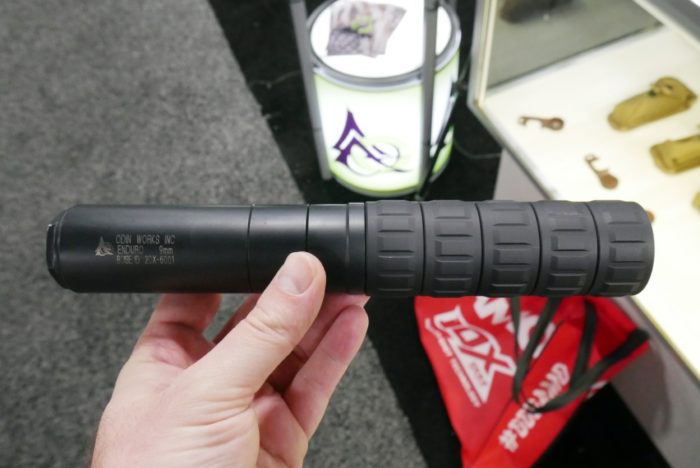 So the ENDURO here is a suppressor with a bore sized large enough for 9mm ammo and a baffle stack strong enough for magnum rifle calibers. Basically, if it fires a projectile 0.357 inches or smaller in diameter, you can run the ENDURO on it (given some barrel length and rate of fire restrictions). But that’s not the cool part. Did I mention that the ENDURO is extremely modular? Much more so than any other centerfire rifle-rated suppressor I’m aware of. Each of the five, separate baffles can be added or removed to the base unit as desired, then capped off with the end cap at whatever length makes the most sense for your firearm and use needs.

Additionally, the mount end is modular and it accepts nearly any mount threaded in what has quickly become the industry-standard modular mount size, 1.375×24. From what I could tell in my whirlwind pit stop, the blast baffle and others close to it are a very tough material such as 17-4 PH stainless steel, then most of the add-on baffles are hardcoat anodized aluminum. Seen above are baffles from the ENDURO and two of ODIN Works’ previously-released, more traditional silencers, the Badlands and the Brimstone. Also on display was a rimfire silencer with screw-on baffles. It looks like it can be run anywhere from endcap-on-blast-baffle to a full length of five baffles. This little guy is called the NAV (short for Navigator) and it’s made primarily for .22 LR. The NAV appears to be made entirely of anodized aluminum except for what I believe is a 17-4 stainless blast baffle.

More details and pricing on these new ODIN Works suppressors isn’t yet available, but as soon as ODIN Works updates their website with this info it will be HERE. Finally, their new ARCA rail accessory is called TRAX, and it allows the user to place a short section of ARCA onto their M-LOK handguard, chassis, stock, FARend, etc. Want more than a short section? Simply link multiple TRAX pieces together to build whatever final length ARCA rail you’re looking for.

This is exactly how I would prefer it on my own gun. ARCA is wide and isn’t ergonomic. Instead of machining it into the handguard or chassis, I’d prefer all M-LOK and basically nothing else. That’s the lightest weight, sleekest possible option and then I’ll take care of bolting things to it wherever I see fit. TRAX looks like a great solution for that.

Stay tuned for more details and reviews from ODIN Works in the future. We’re going to borrow these new suppressors when they’re available and put ’em to the test.