A good 3-gun match is all about making choices. Choices like whether to shoot a target with a handgun or a shotgun. Which side of a “V”-shaped couse to start on. And where to do your reloads. On the “pro” side of the AR15.com Pro/Am competition, there were no choices. Or rather, no choices that actually made a difference. Instead, the winner of the competition would be the person who made the fewest mistakes. And boy, did I make some darn fine mistakes . . .

Our squad started out on stage eight, which had the longest-range shot of the competition at a hair over 300 yards. 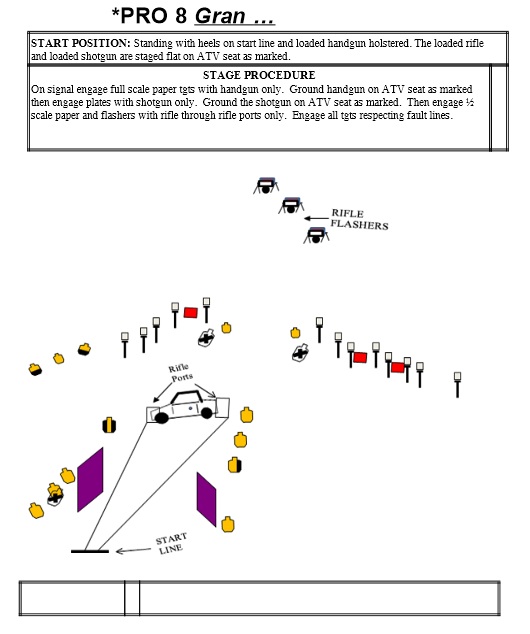 Things started with taking out a bunch of handgun targets, some while hiding behind walls. After that, you grabbed a shotgun to take out nine plates from around an ATV. Finally, you picked up your rifle and engaged two sets of paper plates from some windows on the ground before switching to the long-range steel plates.

The first major issue with this stage is that a single strike of a round on the metal of the ATV is an instant match DQ. When you are shooting around vehicles, especially if they are “live” (working vehicles, not range props), putting a round through the body is a major problem. It makes the shooters slow down and double check their sight picture, to ensure that their muzzle is clear of the vehicle before taking the shot. It’s an interesting challenge to not only work your gun around the vehicle, but that added stress of being so close to a DQ slows down the shooter even further.

The only real choice on this stage was how you shoot the paper plates. The paper rifle targets needed to be engaged through a set of windows on the ground near the ATV, you could either move from one window to the next to take the shot, or you could actually hit both windows from a single position further back. The benefits of the “two window” approach are that when you dumped your shotgun you were already at the first window, so it only required a minimal amount of movement and let you get into a much better position for the long range targets. But the single position approach eliminated the need to move between the different windows completely, and all you needed to do was swing your gun from one to the next. I opted for the two stop approach since it was simpler to remember and put me in a better position for the long range targets.

I had two problems with this stage.

The first issue was that I missed with the shotgun, forcing me to do a standing reload. There were exactly nine shotgun targets, and thanks to the TacOps rules I had exactly nine shotgun rounds in the gun. That added a good four or five seconds to my time and threw off my whole “zen” mindset thing.

Interesting shotgun-related side note: Mark Wills (yes, THAT Mark Wills) shoots on the FNH USA team and has only participated in limited events this year, as such he forgot the shotgun ammo limitations of TacOps. Instead of only stuffing nine rounds in his gun, he topped it off to a total of 12. It made him faster, but also moved him into the Open division. Always double check the rules before a match.

The second issue was that I kept missing the second target of the long range rifle section. After running the rest of the stage, my heart rate was elevated and I was breathing a little hard, and I couldn’t get the rock solid shooting position that I wanted to have. I eventually got my hits, but only after wasting more time than needed.

That issue, the long range accuracy, seemed to be a problem for just about everyone. A 300 yard shot is easy as pie on the practice range, but under time pressure and with everyone watching it turns into a real challenge. Larry Houck’s score reflects that challenge: he ran it nearly 10 seconds slower than I did, all thanks to that long range steel.

We shot stage 8 at about 10 AM. We were scheduled to shoot the next stage at 1:30ish. To us, that seemed like a rather excessive length of time for a break — you get all tooled up and into your competition mindset just in time for a 2.5 hour break before you need to do it all again. We would have preferred to have continued shooting, but that wasn’t the plan.

After a long and leisurely break, we were back at it on stage 1. The layout of stage 1 was deceptively open. The shooter appeared to have an option as to how to shoot the stage, but in reality there were no options. You could choose where to start (which side of a V-shaped stage), but either way you chose, it didn’t make a difference with the time you took on the stage. You could also choose to shoot the pepper poppers with a shotgun, but by the time you loaded up the shotgun the handgun shooters would have already finished the stage.

The major issue I had with this stage was the no-shoot steel targets. There were some orange no-shoot targets near the shotgun steel, meaning that I needed to be more accurate than normal with my shotgun in order to avoid those targets. Each one was worth an added 10 seconds, which is like adding an additional 30% to your score. In short, it sucks. And I tapped one.

There was some moaning among the squad members about the value of those no-shoot targets. In most other competitions, no-shoot targets cost you anywhere from 2.5 seconds to 5 seconds. But 10 seconds? That seemed a touch steep. For the high-level pro shooters, the difference between first and tenth place could be as little as a second. So adding 10 more to your score is like being kicked square in the giggly bits.

Nevertheless, 10 seconds was the penalty I incurred. It sucked and it threw off my game for the rest of the stage, but I trucked on. Larry ran the stage in about 30 seconds, and I was on course to come close…until I got to the pistol shooting section. Handgun shooting is my weakest area and I tried to compensate for my sucky shooting skills by going slower. That slower cadence, combined with poor shot placement, added another 10 seconds to my time. Note to self: hit the handgun range when you get back to town.

Another few hours of “hurry up and wait” and we were off to stage 2. The last stage for day was a real “hose-em-down” affair. Not a whole lot of thinking required, just find your groove and get on the gas. There was one trick to the stage, though, and it saved a butt-load of time.

The stage starts out with some shotgun steel that can be engaged from the start position, and then an assortment of paper arranged on two sides of a central divider. The earlier squads (Karla Herdzik was one) decided to physically move into both the left and the right areas in order to hit the targets, but thanks to a window in the dividing wall, you could actually see all of the targets on the right side of the course from the entry doorway — there was no need to go inside. It shaves about 5 to 10 seconds off your time to shoot from the doorway instead of moving all the way inside the room, especially if you have a lot of mass to move around and momentum isn’t your friend. Like me.

The one tactical mistake I made was shooting the two targets just inside the door as soon as I entered. I should have immediately pivoted to take out the targets on the right side of the course and shot those two targets on the left as I went running past to the end of the stage, but my brain saw some un-shot brown paper and I just couldn’t help myself. The benefit to waiting to shoot those targets is that it saves time to shoot them while moving (economy of motion and all), but I only lost a second or two on that mistake. And all those little seconds tend to add up.

Eric came up after the stage and asked me why I shot the two targets from the doorway. My immediate response: “becuse I’m an idiot.” A fair appraisal of the situation, I believe.

At the end of the first day, I was pretty happy with how I was doing. I started the day off beating Larry by 10 seconds, and by the last stage I was only about 10 seconds off his blistering pace. Considering I started the year off running at just about double his stage time, being down to 50% behind felt pretty good. Then again, I had yet to make my fatal mistakes that would dump me to my final position waaay down the list.