Charlotte, North Carolina endured a second night of riots (or, as CNN prefers to call it, “protests,”) resulting in more injuries and property damage. As Fox News and the Associated Press report:

What started out as a prayer vigil after the shooting of 43-year-old Keith Lamont Scott on Tuesday turned into an angry march and then a night of violence. A man was shot and critically wounded as protesters charged police in riot gear trying to protect an upscale hotel. Police initially said the man had died, but later corrected the statement saying he was on life support. Police didn’t shoot the man, city officials said.

Video obtained and verified by The Associated Press, which was recorded right after the shooting, shows someone lying in a pool of blood as people scream and a voice yells for someone to call for help. People are then told to back up from the scene.

Demonstrators shouted “black lives matter” and “hands up; don’t shoot” while cursing at officers with bicycles blocking intersections. As the protesters approached the Omni hotel, officers in riot gear lined up outside arm in arm and a few marchers threw bottles and clods of dirt.

But not all the marchers left. Police in riot gear then began marching arm in arm through downtown Charlotte intersections, shooting tear gas at people who charged them. At least one protester knocked down a CNN reporter during a live shot.

Once again, the facts on the ground seem to be turning the traditional media narrative on its head. A major point of contention, that Scott was holding a book, not a gun, was undermined when a bystander’s photo taken shortly after the shooting seemed to show a gun, not a book, lying on the ground next to the deceased (see photo above).

Charlotte-Mecklenburg Police Chief Kerr Putney, also African-American, continues to defend his officers, insisting that they had warned Scott to drop his firearm, and Scott’s failure to obey that instruction was a major factor in the shooting.

The deceased’s family disputes that story. Scott’s brother says that he was peacefully waiting for his children to come out of school, that he was approached by undercover police officers acting in a threatening manner, and was scared for his own safety.

BREAKING: brother of man killed in CMPD shooting says he got out of his car because he was armed & scared of PD pic.twitter.com/IgwsrLmfKf

The gentleman also had a few other things to say that probably cross the line into “hate speech,” if that phrase means anything coherent.

Fox News reports that Charlotte Mayor Jennifer Roberts, who is white, appealed for calm. “African-American leaders who said they were speaking for Scott’s family held their own news conference near where he was killed Tuesday, reminding the crowd of other shootings and abuses of black men.” Indeed, the head of an organization with the unfortunate acronym “THUG” (for “True Healing Under God”) threatened more violence: “Just telling us this is still under investigation is not good enough for the windows of the Walmart.”

Because of the rioting, North Carolina Governor Pat McCrory declared a State of Emergency in Charlotte, and is deploying the National Guard.

There was even a federal case decided in 2012 involving an as-applied challenge to to the law, which was resolved in the plaintiffs’ favor, Bateman v. Perdue. The case was sponsored by the Second Amendment Foundation, and argued by civil rights attorney Alan Gura. The applicable section of law appears to be § 166A-19.31: Power of municipalities and counties to enact ordinances to deal with states of emergency. The text of that legislation states that during a state of emergency, a municipality or county may enact certain prohibitions. § 166A-19.31(b)(4) lists the following as being included in that prohibition list:

As always, this is purely for informational purposes and is not intended as legal advice…consult a North Carolina-licensed attorney for that (and if any of this is incorrect or should be clarified, that will be most welcomed in the comment section).

Here’s hoping that tomorrow’s update doesn’t involve more injuries and property damage, because I agree with the sign held by this protestor: 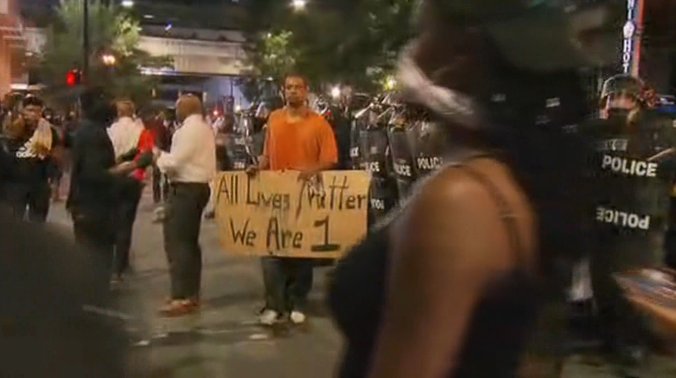