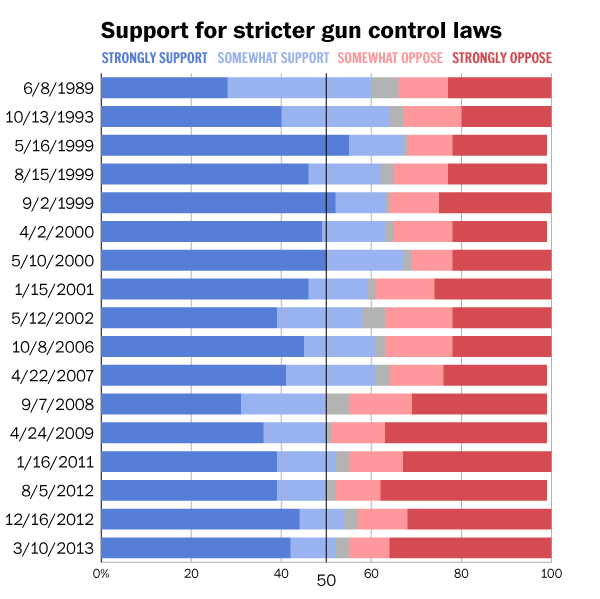 By Nick Leghorn and Dan Zimmerman

Since yesterday was a day that ended with a ‘y’, The Washington Post ran another hand-wringing head-scratcher, asking why, despite Americans’ overwhelming support for expanded background checks, Congress can’t seem to pull the trigger. So to speak. Striking a blow for full graphic artist employment, The Post broke out a lot of little grey and red silhouettes — all of them male, do doubt for some war-on-women reason — to illustrate the findings of a recent Quinnipiac poll. According to the results, it apparently doesn’t matter if you’re left, right or center. Male or female. Young or old. If you’ve been Q-Polled and asked, “Do you support or oppose requiring background checks for all gun buyers?” you probably answered yes. But that’s not all they asked . . . So when it came time for the The Post’s Photoshop wizzes to illustrate the “do you want more gun control” results, they had to use a lot more red electrons than they did for all those background check graphics. You probably won’t be particularly shocked at conclusion The Post draws, either.

People support background checks. But opponents of expanded background checks, who see that expansion as a form of gun control, have been effective at linking the two. Combined with the political power of groups like the National Rifle Association, that’s enough to keep Congress from doing anything at all.

You didn’t think they’d get through a post like that without pointing the finger at every hoplophobe’s favorite boogie man, the NRA, did you? Philip Bump did everything but call for an executive order to borrow the power from Congress in order to do something.

If politicians are good at anything — and that’s an increasingly large if — it’s wetting a finger, raising it over their pointy little heads and determining which way the winds are blowing. And if their staffs are any good, most of them have probably seen some recent findings from Qunnipiac’s rival, Gallup. With the obligatory caveat that correlation does not equal causation, it’s hard not to notice that, over about the same time period as the Q-Poll covers, Americans’ faith in government has nosedived while their distaste for any more restrictions on their natural, civil, Constitutionally protected right to keep and bear arms has increased. Trends so significant and obvious that even the members of the media have have noted them.

The problem in all of this for gun control activists is that we’ve seen their proposals. Over and over again. Americans may support background checks, but the way in which the Democrats and other anti-gunners propose to make that happen has been proven so abhorrent to the American appetite that their legislation failed to pass even the Democrat-controlled Senate.

When the Democrats proposed universal background checks last year, they didn’t just demand background checks — they also tacked on a backdoor registration system, wanted to force people to use gun stores, and would have turned a staggering number of gun owners into felons for common sense activities like sharing firearms while shooting on private property and leaving your gun collection at home while traveling. When afforded a glimmer of hope that they could make a small change that might prove popular, the Civilian Disarmament Industrial Complex shot itself in the foot by showing their hand and falling prey to the temptation of over-reach.

As we’ve seen time and again in poll after poll, the preference for the American public is for Congress to focus on anything but gun control. Just because Americans support an abstract idea doesn’t mean that they necessarily of how legislators would make that happen. Sure they would like background checks for every gun purchase, but the actions of Democrats in recent years have so scared the American public that they’d rather stay with the status quo rather than roll the dice with any new legislation Congress might concoct.

The gun-grabbing community is pushing this poll result (the first part, anyway) as much as possible because they feel it backs up their position. Unfortunately they don’t seem to understand that what the poll really shows is little they’re trusted. Even when a majority of Americans supports one of their positions, their underhanded tactics and massive over-reach have turned an increasing majority of Americans off to the prospect of additional gun control legislation in any form whatsoever.