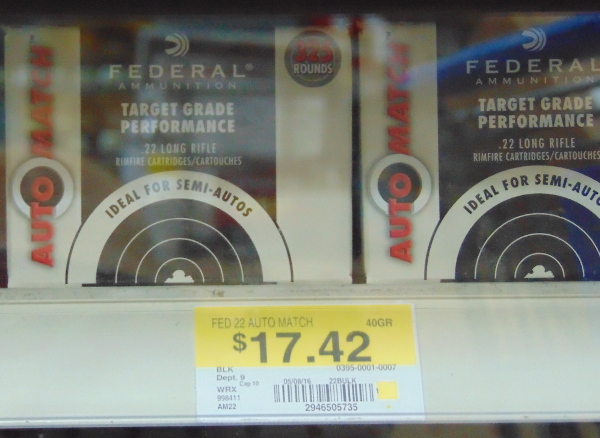 In the run up to the 2016 election, the price of .22 ammunition has been fluctuating up and down around six cents a cartridge for baseline bulk ammunition. The reasons are clear. Production of .22 ammunition is up by about two billion rounds a year, responding to stiff demand for the last four years.

Part of the demand is structural. Many new gun owners and shooters have been created. Many of the younger members were raised on first person shooter games like Doom, Golden Eye, Battlefield, and Call of Duty. People in the industry have reported that the new generation of shooters is more likely to go through 500 rounds of .22 in a shooting session, instead of 50.

The U.S. is now home to an estimated 100 million-plus .22 rifles and pistols. With very little care they last for many decades. Moreover, decent .22 rifles and pistols have become relatively cheap. A Marlin model 60 today can be had, brand new, for $150.  A Savage model 64 can be had for $116, and the Mossberg semi-auto for $109.

Some of the increased production of two billion rounds a year will go to feeding the increased structural demand. But a considerable amount of the demand has been a bubble created by concern over gun control. It’s one of the few areas where President Barack Obama was stymied by the American people and Congress. Hillary Clinton fed the fear with her campaign rhetoric and potential Supreme Court justices.

Although anti-Trump current protests and riots, and talk of presidential assassination, are continuing this climate of fear, I expect the demand for .22 ammunition will drop when the reality of a Trump administration hits home. At the same time, millions of .22 owners have built up a stockpile of a few thousand rounds of ammunition. That ammo will be around for a while.

After President Trump is safely inaugurated, and starts to move his legislative agenda, demand will drop and prices will fall. I expect bulk .22 ammunition to be available for four cents a round by October of 2017.