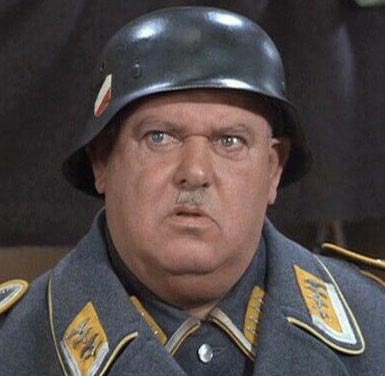 So now that Osama Bin Laden is dead and gone, there are some questions that are unanswered, questions the American public (not to mention Congress and the ObamaNation) are keen to have answered. Number One With a Bullet on the question hit parade would be With Pakistan’s version of West Point just down the street from Bin Laden’s million dollar hideout/hacienda, how could none of Pakistan’s military know he was there? Clueless or Corrupt – take your pick.

Apparently, the willing suspension of disbelief doesn’t end there – a number of high-ranking Pakistani generals have homes up and down the street near Bin Laden’s digs. Ooops. Imagine what must have gone on when they heard the unmistakable sounds of a couple of Blackhawk helos coming in and landing at the Bin Laden’s place. If that’s not an “Oh S**t Moment,” I don’t know what one is.

I mean, it’s one thing for the Pakistanis to insist, “Hey, we don’t know where the guy is…he’s probably living in a cave on the border. Have you seen that terrain? Have you seen how many caves there are? We couldn’t find him if we wanted to!” Only it’s pretty obvious this morning to anybody but the most naive of blonde bimbos, the Pakistanis knew exactly where Bin Laden was. The whole time. For the last five or six years, anyway. And they were perfectly content, keeping us in the dark.

What are they teaching at this school? Incompetence 101? Second-year Graft and Corruption? Who’s the Dean of Studies…Sergeant Shultz?

Now the idea that Pakistan might hide Bin Laden wouldn’t be just completely beyond the pale – after all, you’ve got to figure their cooperation is somewhat under duress. They are, after all, a Muslim country, and a good bit of their population has no love lost for the U.S. of A., but it gets worse. We’ve been sending millions of dollars in foreign aid over there. According to the fine folks over at Wikipedia.org:

Between 2002-2010, Pakistan received approximately 18 billion[8] in military and economic aid from the United States. In February 2010, the Obama administration requested an additional 3 billion in aid, for a total of 20.7 billion.[9]

Um…can you say “EPIC FAIL?” And it gets even worse than that. Of the nine billion dollars or so that we’ve slid their direction for the past ten years, earmarked for fighting the Taliban and Al Queda, Pakistan’s admitted they diverted most of it to help prepare the country for war with India. Swell.

Let’s get this straight, citizens: Pakistan’s been playing us. Period. End of story. And you’re gonna hear some tap dancin’ out of Hillary’s State Dept., no matter what comes out in the wash. The argument will go like this: “If we don’t keep giving Pakistan foreign aid, the country will fall to the Taliban and Al Queda, and we’ll have another mess on our hands.”

There are only two things these clowns understand: the projection of force and a willingness to be absolutely ruthless. Regardless of if he meant to or now, Obama suddenly looks to the Arab Street as if he grew a pair overnight. What he does next is critical.

If he stops all foreign aid to Pakistan immediately, it will not tilt that country towards radical Islam. It will get their attention. If he follows it up by stating that We reserve the right to track down, capture and/or kill ANY terrorist suspect, no matter where they may be in any country, hostile or friendly, and will consider any interference in this policy to be a hostile act against America, then, we’ll see Pakistan, Afghanistan, and all the other ‘stans’ over there line up like good little Third-world countries and do what we tell them to do.

What are the odds that Obama will do this (either publicly or privately)? I’d say the odds are about 10,000 to 1 against.

Obama got lucky. And he has an opportunity here to bitch-slap Pakistan into compliance, and get all the other little Third-worlders over there to toe the line. I hope he doesn’t blow this chance. It’s likely the only chance he’ll get.