Whenever we run a review of a double barrel shotgun, we get comments wondering why an over/under costs, on average, so much more than a similar semi-automatic or pump model. Frequent commenter Dyspeptic Gunsmith, a man who’s seen a shotgun or two in his day, has this to say about that:

Lots of commenters on the web, in print, etc., appear to not understand why double-barreled, break-action shotguns cost so much more than the typical pump or semi-auto shotgun.

There’s several reasons, but let’s start with the most obvious:

When you purchase a double-barreled shotgun, the shotgun has two barrels. Right there, you’ve added (typically) at least $300 in the cost of the gun. Then the details start adding up: The gun will have two hammers, two sears, and two extractors – at a minimum.  If the gun has ejectors rather than just extractors, then the gun has two more sets of hammers/sears/triggers/etc in the forearm. The action of opening the gun cocks the ejectors in the forearm, and when one or both barrels of the gun are fired, then a trip lever communicates this from the hammer in the receiver to the trigger/sear in the forearm for that barrel. When the gun is opened, the fired barrel (and only the fired barrel, if both barrels were not fired) ejects the spent shell.

This is not only a lot more parts, these various actions need to be tuned to happen in the correct sequence, and, in higher-quality guns, the cocking of a fully spent gun happens with at most two “clicks.” In the highest quality guns, the cocking of left/right or top/bottom barrel hammers/sears and ejector mechanisms has been timed so that there is only one “click” heard by the shooter when they open the gun. This take a significant amount of attention by a skilled gunsmith at the factory to make this a reality. British “best” guns have one click. Many high-end American double guns will have two clicks. Then there are the details of construction. The two barrels didn’t come off the boring/turning/finishing machines bound together like that. Modern SxS shotguns are assembled with the top and bottom ribs, and possibly a monoblock. For those unfamiliar with double barrel shotguns, the “monoblock” is a part of the barrels that will include the chamber areas of the barrel, the breechface (with extractor/ejector cuts), the hook/action interface pieces, and the interface to the two barrels.

When the barrels are put together into a barrel set, modern shotgun production has the various parts treated with some brazing powder & flux, then everything is put into an oven to braze everything together. In past times, most barrels would be soft-soldered together up to the monoblock or hook area, and the area back near the action would be silver-soldered together for higher strength. This took skill to accomplish correctly. Double-barrel shotguns have a significant advantage over single-barrel shotguns because you can have a different choke in each barrel. This means that a double barrel shotgun can be configured for patterns at different ranges. The classic SxS “field” gun would be configured with a Modified or Improved choke on the first barrel, and a Full choke on the second barrel. Many of today’s double-barrel shotguns will have removable chokes, allowing the shooter to reconfigure the shotgun from a long(er) range clay sport like trap (or other games, like Annie Oakley shoots) to a skeet gun with wide patters for close-in shots.

Double barrel shotguns also have the advantage over single-barrel shotguns in that if the first round fails to fire, you have a second barrel – as long as you have a mechanical trigger or double triggers. More on this in a bit.

The last point where break-action shotguns needed more attention was in fitting the barrels to the receiver. Before highly repeatable CNC machines came along, this was another job done by the hands of a skilled gunsmith. Today, modern production machines are able to eliminate most of this. Many double-barreled, break-action shotguns are made “tight” so that as they wear, they become more easily opened. When even a modern shotgun wears to a point where the barrels become “off face,” (you can see some light between the water table of the receiver and the bottom of the barrels), the barrels will need to be put back “on face” by a skilled gunsmith.

Then there were the issues of trigger mechanisms in double-gun shotguns. Double-barrel purists swear by double triggers, with the front trigger typically firing the more “open” of the two barrels first, and the rear trigger fired the tighter choked barrel. Having double triggers allows the shooter to choose the barrel with the tighter choke first, if the shot requires it. 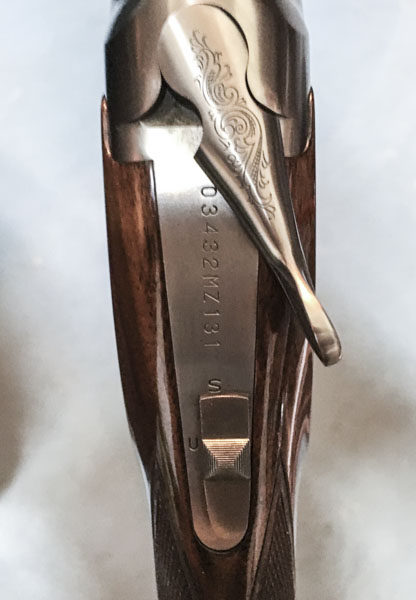 Other double-barrel shotguns will automatically advance the trigger to the second barrel purely as a result of the trigger being pulled on the first barrel. This type of trigger is called a “mechanical trigger.” The fastest way for a shotgun buyer to determine which type of trigger a double gun has is to unload the gun by fully breaking the barrels (to cock the lockwork), close the gun, confirm the gun is pointed in a safe direction, then confirm the safety is off and pull the trigger.

All double guns’ triggers pulled in this manner should result in a nice, sharp “click” as the first barrel’s hammer hits the firing pin home. Now, allow the trigger to reset (ie, take your finger off the trigger) and pull the trigger again. If you head a second sharp “click” of the second hammer hitting the firing pin, then you have a gun with a mechanical trigger. If you hear nothing, then, using your fist or open hand, give the gun a good, firm strike on the butt of the gun. Try the trigger again. If you hear the second hammer strike its pin, you know you have an inertia trigger.

Long story short: Quality SxS and O/U shotguns have lots more going on in them – there’s a lot more parts, involvement and labor involved than a single-barrel pump or semi-auto. They need more attention during their creation then single-barrel guns. They do have a specific set of advantages to shotgun shooters – before we start talking of embellishments and “best gun” values. Fox sold many thousands of Sterlingworth guns, and Parker sold many thousands of Vulcan guns – which were very plain in appearance, but still well made. Today, these plain SxS guns can be had for $800 on up in the more common variations (eg, 12 gauge, 16 gauge).

This post was originally published at dyspepticgunsmith.wordpress.com and is republished here with permission.