Most of us ‘Muricans ain’t familiar with SHIELD Sights, but we probably should be. They’ve been making firearms, suppressors, optics, and more — primarily for the British military — for 30-some-odd years. In fact, they manufactured Trijicon’s first red dot, and they make the JP Rifles JPoint that I speak highly of. Well, it’s time to get to know SHIELD directly, as their products are going to be available in the U.S. this year. We got a close look at a few brand new ones . . .

First up is the RMS (click to download product PDF), or Reflex Mini Sight. It’s basically an updated JPoint — which is sold in other countries as the SMS, or Shield MiniSight, by the way — in an aluminum housing (instead of polymer). It also adds the option of a slide-out battery tray. 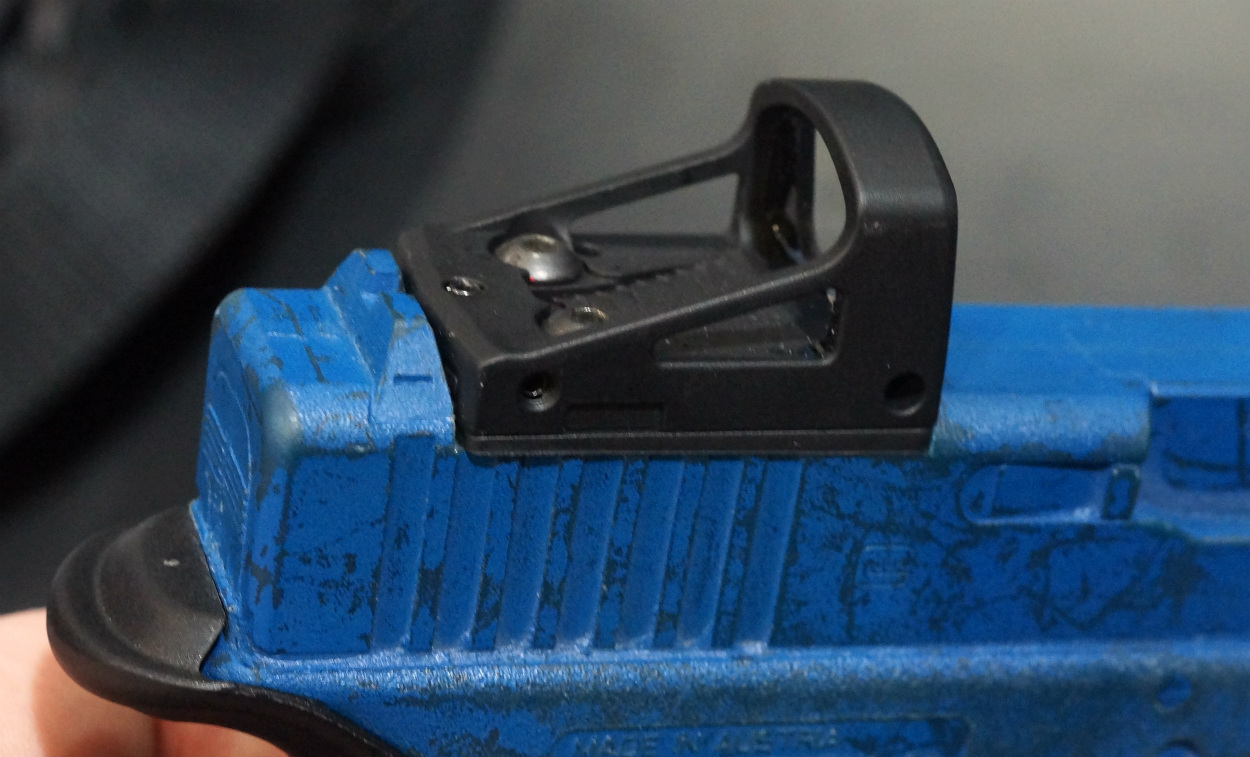 Of immediate interest to me is the slim mount for the JPoint / RMS. As mentioned in that G19/G17 MOS review, my JPoint barely co-witnesses just by a hair with the factory sights and factory MOS mounting plate. With SHIELD’s slim plate, I’ll really be in business. Definitely picking up one of these ASAP, at which point I’ll drift the factory GLOCK rear sight off the slide and just use the integrated sight notch in the JPoint as my rear backup sight. And finally we get to the 2.1 oz SIS, or Switchable Interface Sight. It’s the same, military-proven SHIELD CQB/CQS with the addition of a manual brightness adjust and four switchable reticles. There are two models, the CD or BD, and each can switch between any of its four reticles seen below.

A 1 MOA dot is pretty awesome for accuracy, and even pumped up to full brightness I found that it stayed crisp and didn’t halo or wash out like most. While a manual brightness mode has been added, the auto-adjustment still works, and works well. Check that video up top to see it in action. Most optics auto-adjust to the level of lighting where you are, rather than where your target is (a big issue if you’re in dark shade but your target is out in the sun), but SHIELD plays this game a little better and its system is pretty decent at metering off the target brightness. The standard mount for the SIS is composed of a base on which skeletonized spacers can be stacked. Add or remove spacers to adjust the height of the optic.

Even with multiple spacers, the center remains open for co-witnessing with iron sights. But, if co-witnessing isn’t a priority, the SHIELD Battery Mount will increase the one year of life you can expect with normal usage from the SIS’s single, CR2032 battery to…wait for it…8-to-10 years. It looks like a fairly standard riser mount, but it holds a CR123A. The battery goes in the rear compartment, and that rubber junction thing on the right side piggybacks the power from the mount up to the optic. I’m hoping to get my hands on an SIS to check out. Apparently the British military chose it over Aimpoint after they kept on trucking when the Aimpoints failed. I’m sure my requirements aren’t quite as rigorous, but for $449 it’s nice to know this military-grade hardware can shrug off some serious abuse.