Director Roland Emmerich is called the Master of Disaster for good reasons. He directed “White House Down,” in which he shot up 1600 Pennsylvania Avenue like it was the Reichstag in 1945. He helmed “The Day After Tomorrow,” where most of the Northern Hemisphere froze because Congress wouldn’t approve the Kyoto Protocols. Or something. He brought us the original “Independence Day” and vaporized almost every major city in the world. Not content with devastating New York, the White House (twice!) and Tokyo, Emmerich is back with ‘Independence Day: Resurgence’ in a spirited attempt to destroy an entire film genre.

People who saw the 1996 Will Smith vehicle will remember the original ‘Independence Day’ as a goofy, fun, fast amusement park ride with an effective cast that hammed it up more than a Brooklyn delicatessen. The hero of ID4 (as it was called) was Captain Steve Hiller (Smith). Hiller isn’t in ‘Resurgence’ because he’s dead. Or maybe because Smith blew his sci-fi load on a bloated bomb called “After Earth,” which was such an abortion that it should have been called “Afterbirth.” Or maybe he was too expensive. In any case, he’s gone.

Former POTUS Whitmore (Bill Pullman) is back but he’s totally fruit loops, his brain fried by his Vulcan mind meld with the captured alien in 1996. He also hasn’t shaved since 1996, probably because nobody trusts him with anything sharp. What the world wants to know is whether he’s bathed in the last 20 years. David Levinson (Jeff Goldblum) is back as the guy who saved the world in 1996 by planting a virus into an alien computer with a lapsed Norton subscription. He’s now the esteemed director of the really important Earth Space Defense Agency, but he’s lost the dorky underdog juju he had in ID4. Alas, he still has the same annoying nudnick of a dad, Julius Levinson (Judd Hirsch), who claims that he saved the world by warning David not to get a cold. Yes, really. Dr. Okun (Brent Spiner) is back from the dead after a 20 year coma and still hasn’t had a haircut. The guy looks like Rapunzel. ‘Member that scene in the original where the alien used him as a hand puppet and made him say “Release me?” Well, about the same time that Okun came out of his coma in ‘Resurgence,’ I found myself mumbling the same words as I almost slipped into a coma of my own. Jasmine Hiller (Vivica A. Fox) is back, but she’s given up exotic dancing for something more suitable for a widow of global hero Steve and mom of Dylan Hiller, fighter pilot and global hero-in-waiting. Dylan (Jessie T. Usher) is Steve Hiller’s studly stepson. He’s also is the best fighter pilot in the history of the universe since dear old dad bought the farm. Oops, excuse me, I meant the handsome Lt. Jake Morrison, a seat-of-the-pants, swashbuckling space tug pilot who never met an order he liked. He’s in the film because it needed another hero who wasn’t Social Security eligible. Hemsworth towers over this movie, mostly because he’s 6’3” and everybody else except Usher plays it like they’re 5’2”.

Current POTUS Elizabeth Lanford (the steely-eyed Sela Ward) is an icy yet comely cougar who (sadly) bears no resemblance whatsoever to any current pretender to said office. Area 51 is back and it looks like the set from “Bones.”

And the world is back. It’s been rebuilt and it’s downright lovely, even (I suppose) Camden, N.J. The planet is also at peace, with all nations joining hands and singing Kumbaya at the UN. Since the governments of the world always knew that the aliens (who look something like outer space squids) might come back, they used alien technology to establish a mighty global defense system, create cold fusion and space flight. The Chinese have been integral to developing the defense system. Yes, even in this alternate universe, the Chinese are quite adept at ripping off other people’s technology.

Although President Lanford claims that there hasn’t been an armed conflict since the War of ‘96, a fierce African warlord named Dikembe Umbutu (Deobia Oparei) and his gang of large, scary and well-armed bodybuilders spent a decade or so winning a vicious ground war against the aliens on the Dark Continent. Which the Umbutu gang did without any help, thank you, while United Nations were busy singing Kumbaya and rebuilding Camden, N.J.

So here’s the, uh, plot: They’re ba-ack! That’s pretty much the whole shebang right there. Not Many Spoilers Ahead
The Death Star, oops, I mean a Mother Ship, is back, but this time the damn thing is 3000 miles (!) across. 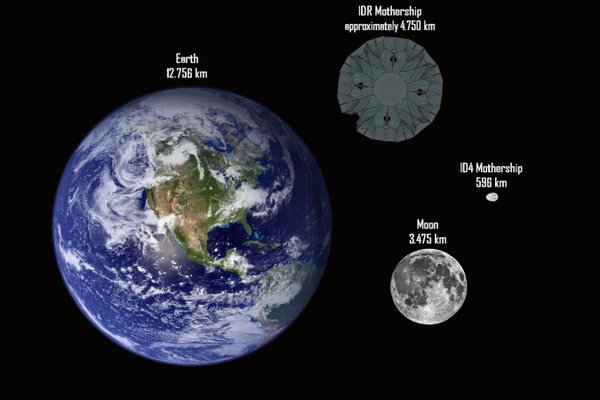 There’s an enormous Harvester Queen running the show whose name is never mentioned, but I think it’s Latifah. Anyway, the Harvester Queen is twice as nasty as the egg-layer from Aliens and about as tall in her spacesuit as an oil derrick. The alien soldiers in their biomechanical suits are back, too, but just to keep everything to scale, the suits are now fifteen or twenty feet tall.

You see, because this is a sequel, the aliens have to be bigger and badder than in the previous picture. In “Independence Day Three: Return of the Revenge of the Insurgence,” expect the squids to fly their whole damn planet here wearing suits the size of the Shanghai Tower. So what do the squids want? Our water? The world’s entire supply of sushi-grade toro? Nice jewelry? No. But if they get what they’re after, we’re doomed! Whatever shall we do? The aliens won’t fall for that old virus in the computer trick again. This time, they have Kaspersky.

But just so you don’t think that the whole universe wants us to drop dead, there’s a Sphere sent to us by an advanced race of friendly, nice aliens who have given up their corporeal existence for a virtual one. You know, like a lot of American teenagers.

And guess what? The Sphere is a Sheila! Voiced by Jenna Purdy, the Sphere offers to evacuate the remaining humans to a refugee planet where survivors don’t need H-1B visas and can live in three bedroom homes with air conditioning and designer kitchens. Like Jeff Goldblum says, “Change your apartment, change the world.”

Well, thank you very much, Alien Sphere Lady, but we humans won’t be needing your charity and we don’t need you to tell us what a remarkable species we are even though you’re going to tell us later in the movie. Because we have the old guys!

If we need a looney toon former fighter pilot like Russell Casse (Randy Quaid) in ID4 to fly the required suicide mission, we have one, and he’s ready to go all kamikaze on the aliens so that the audience can feel sad.
If we need Julius Levinson to rescue a busload of abandoned and orphaned kids, he can do that. He may be an octogenarian, but he can drive that bus with the iron-willed ferocity of a man in his late seventies. We can send in the fierce, tough-as-nails-but-tender-as-prime-rib warlord. He cool. He bad. He carries two kukris the size of downhill skis crisscrossed over his back. What he’s doing in this movie we have no idea, but he’s here so we might as well use him.

And we can send in a couple of engaging flygirls, including Chinese pilot Rain Lao (Hong Kong’s Angelababy) and President Whitmore’s ex-fighter pilot daughter (pro kiteboarder Maika Monroe). Why? Because they’re cute, that’s why.

The Guns of Independence Day: Resurgence
Thanks to captured alien technology, firearms in ‘Resurgence’ have gone from analog to digital. It seems like the only legacy firearms are Soviet-era DShK machine guns chambered for 12.7×108mm flying hammers and a slew of pre-ban GLOCK 17s. It’s good to know that something as insignificant as an interplanetary war hasn’t shut down the supply of Russian milsurp and 9mm Parabellum. But even in our golden future, the supply of twenty-twos can be spotty. Plus ça change, plus c’est la même chose. The new firearms include what seems to be hybrid adaptations of the aliens’ fierce “primary weapon” from ID4, and blasters, lots of blasters, including shoulder-fired blasters that blow stuff up without tannerite. I want one, but I expect that concealed carry of blasters will be banned because of the potential for over-penetration.

Conclusion
A sequel that measures up to the original is rare. ‘Resurgence’ is neither rare nor very well done. Despite its sophomoric plot, grade school dialogue and cardboard characters, Resurgence isn’t the worst movie ever made. It’s just the most disappointing sequel since “Batman and Robin.”

Okay, it’s nowhere near that bad (what is?), but after a promising beginning, ‘Resurgence’ turns into a $200 million snooze. American viewers are panning it, but the PRC should eat ‘Resurgence’ up, due to its fawning reverence for China and the casting of Angela Yeung Wing, aka Angelababy. Kids should like it well enough, and it’s rated PG13.

The best part of ‘Resurgence’ was a brief, nonspeaking cameo by the Robert Loggia, reprising his role from ID4 as General William Grey. Loggia died of Alzheimer’s disease shortly after filming and the ravages of the illness are painfully obvious on the big screen. ‘Resurgence’ is dedicated to him, which is both touching and respectful. Still, I can’t help thinking that after a productive 60-year career, Loggia deserved a better movie for his final act.

SPECIFICATIONS:
Model: Independence Day: Resurgence (3D)
Caliber: Small Bore
Length: 120 minutes, which is shorter than ID4 but seems longer than “Fanny and Alexander.”
Action: Go to a gun range and shoot up some tannerite. It’s like that, but in CG.
Finish: Dumb. The last line is even dumber. You won’t believe how dumb. It gives dumb a bad name.
Price: $165-$200 million, more or less. Emmerich should have spent at least some of that money on a better script.

Reliability * *
A flaccid and predictable plot, poor dialog, meh characters, and acting to match makes for a very mediocre movie. Still, the likeable Hemsworth and the equally likeable Usher handled themselves well and should be able to survive until Independence Day 3.

Overall * * 1/2
‘Resurgence’ is hardly the ID4 sequel that we were hoping for. If China ticket sales tank, DVDs of ‘Resurgence’ may soon be available in a supermarket bin near you. If ‘Resurgence’ doesn’t tank, prepare for the next sequel, which might turn out be a galaxy-class stiff.