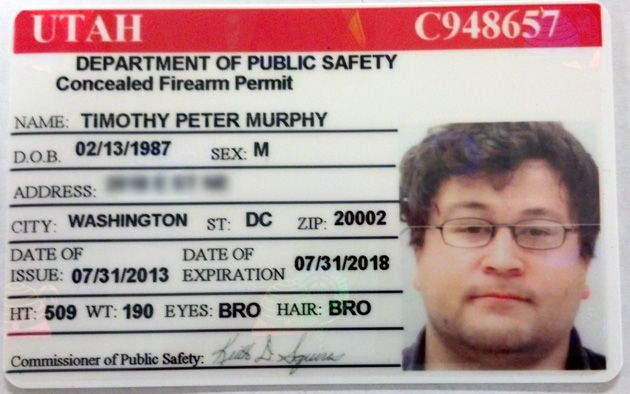 After taking the required safety class, Mother Jones writer Tim Murphy has a Utah concealed carry permit. This bothers him. “My achievement doesn’t make sense for a number of reasons. One, I don’t live in Utah. I’m a resident of Washington, DC, a city that holds concealed handguns in roughly the same esteem as working escalators. I’ve never shot a gun. And in distinctly un-Utahn fashion, I’m nursing a hangover. Fortunately, none of that matters here. After four hours at Dukes Defense [MD], I have a completed application and a snazzy graduation certificate for my wall. Sixty days after my application is processed, I’ll be able to carry a concealed weapon in no fewer than 32 states. It’s great for road trips.” Ego trips too. Here we go . . .

As Dukes walks us through a long list of precautions, it’s clear that he’s passionate about safety. It’s equally clear that I don’t know the first thing about how to responsibly handle a firearm, let alone carry one in public. Jenny invites us to come up front to practice loading a handgun with fake rounds. When my turn comes, I struggle to load more than a few before they’re ejected halfway across the room. But that’s not going to stop Utah from giving me a permit.

Because whether or not a man with a hangover can load a magazine with inert cartridges into a firearm without ejecting a few rounds is a valid test of whether or not he should be able to exercise his natural, civil and Constitutionally protected right to keep and bear arms. Actually, it’s about your right to bear arms, for which Mr. Murphy has seemingly endless contempt, based on personal projection.

A few weeks after my graduation, I call up Dukes. My application is still being processed, but a question has been nagging at me: What did a seasoned instructor think about the fact that pretty much anyone could walk in and get a Utah permit without demonstrating a lick of proficiency with a gun? While he seems disappointed that I signed up for the class with no actual desire to protect myself, he hardly hesitates: “The Constitution doesn’t say you need it.”

No it doesn’t, does it? Nor does it say we need slovenly journalists distorting facts to undermine Americans’ firearms freedom. But there you go.