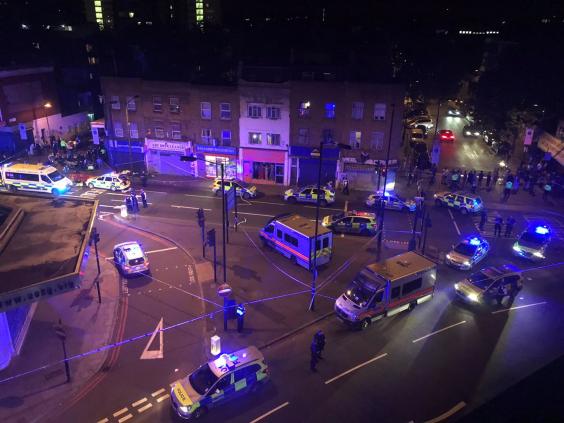 Britain slid closer towards a sectarian war between Muslims and non-Muslims yesterday. A terrorist drove a van into into a crowd of Muslim worshippers leaving the Finsbury Park Mosque around midnight local time, killing one and injuring at least 10 others.

Security forces wrestled the assailant (above) to the ground and took him into custody shortly thereafter. [UPDATE: The attacker has been identified as 47-year-old Darren Osborne of Cardiff, Wales.]

“I hit him on his stomach… and then me and the other guys… we held him to the ground until he couldn’t move. We stopped him until the police came.

The eyewitness report suggests that the man didn’t attempt to attack people with a knife or other weapon after exiting the vehicle, as has been the case in recent terrorist attacks perpetrated by members of the Islamic faith in the U.K. and elsewhere.

In 2006, Ralph Peters wrote something that may have been more prescient than people realized when he disparaged those who claimed that Europe would be overrun by Islam:

The notion that continental Europeans, who are world-champion haters, will let the impoverished Muslim immigrants they confine to ghettos take over their societies and extend the caliphate from the Amalfi Coast to Amsterdam has it exactly wrong.

The endangered species isn’t the “peace loving” European lolling in his or her welfare state, but the continent’s Muslims immigrants – and their multi-generation descendents – who were foolish enough to imagine that Europeans would share their toys.

In fact, Muslims are hardly welcome to pick up the trash on Europe’s playgrounds.

Don’t let Europe’s current round of playing pacifist dress-up fool you: This is the continent that perfected genocide and ethnic cleansing, the happy-go-lucky slice of humanity that brought us such recent hits as the Holocaust and Srebrenica.

THE historical patterns are clear: When Europeans feel sufficiently threatened – even when the threat’s concocted nonsense – they don’t just react, they over-react with stunning ferocity. One of their more-humane (and frequently employed) techniques has been ethnic cleansing.

In this twilight struggle, everyone is a first responder. It’s a terrible time to forego the right to keep and bear arms, as Britons have done. And they have little to no prospects for regaining that right any time soon.

Stay alert, have a weapon and a plan. Meanwhile, this may not be the best time for a London getaway vacation.