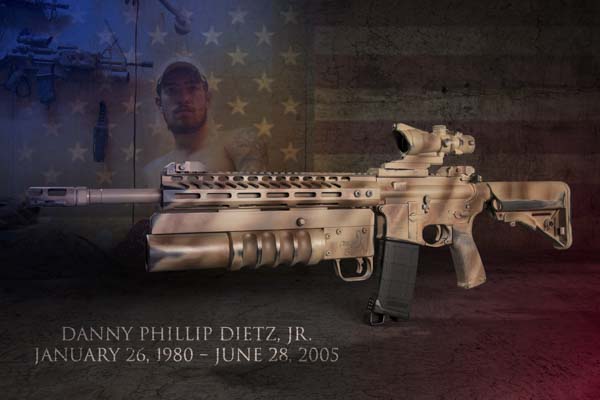 Beginning June 1 and running through June 19, 2016, this auction is for serial number Dietz10, selected by Danny’s mother Cindy Dietz-Marsh to honor SEAL Team 10 and its members who valiantly executed Operation Red Wings. To view the auction please go to: http://www.gunbroker.com/item/562084801

The Danny Dietz Tribute Rifle is a modernized replica of the gun Dietz carried in combat during Operation Red Wings. The gun and package features a number of significant engravings including Danny’s original artwork, such as the last known drawing Danny Dietz created and sent to his mother Cindy on Mother’s Day 2005. The drawing shows the Virgin Mary with the infant Jesus in a manger and is engraved on the left side of the rifle. Also engraved on the rifle are Danny’s signature and the Bone Frog with Trident, a recognizable symbol honoring Navy SEALS who have “lost their skin” in the fight for freedom.

The rifle comes with three challenge coins commemorating Danny’s life and serialized to match each rifle’s respective serial number. The coins are specially packaged in a custom wooden box engraved with another of Dietz’s original drawings of a warrior couple holding a Trident. This drawing was also selected as the artwork for Dietz’s BUD/S graduation t-shirt, a tradition among the proud few who pass the grueling training to become Navy SEALs.

All proceeds of from the sale of this auction will benefit the Danny Dietz Memorial Fund and the Danny Dietz Leadership and Training Foundation http://www.dannydietz.org/ http://navysealdannydietz.com/ The Danny Dietz Leadership & Training Foundation is a 501(c)(3) organization dedicated to enrich the lives of the participants, their families, and the general public through strenuous mental and physical activities designed to create better citizens and members of the community.

“Danny Dietz was the definition of tough. He knew if things had to be done you could never give up. That’s what he did He was shot five times had many broken bones he never even thought of quitting. Dietz fought until he could no longer lift his Rifle and died for his country. Danny Dietz believed in honor and died an American hero.”

Danny Dietz Jr. was born on January 26, 1980 in Aurora, Colorado the son of Danny Phillip Dietz Sr. and Cindy Dietz-Marsh and brother to Tiffany Bitz and Eric Dietz. He was a 1999 graduate of Heritage High School (Littleton, Colorado). He earned his black belt in Taekwondo from the Korean Academy of Taekwondo. He enlisted in the Navy in 1999, earned his SEAL trident in 2001 and was subsequently assigned to SEAL Delivery Vehicle Team Two in Virginia Beach, VA. 2003. Dietz deployed with his Special Reconnaissance element to Afghanistan to support Naval Special Warfare Squadron Ten and the prosecution of the Global War on Terrorism.

Dietz was part of an elite team of four SEALs on a reconnaissance mission “tasked with finding a key Taliban leader in mountainous terrain near Asadabad, Afghanistan,” according to a Navy news release.

On June 28, 2005, SEAL Team 10 was assigned to kill or capture a high-ranking Taliban leader in the Hindu-Kush Mountains. The SEAL team was made up of Michael P. Murphy, Marcus Luttrell, Danny Dietz and Matthew Axelson. Luttrell and Axelson were the team’s snipers while Dietz was the Communications Operator and Murphy was Lt. in charge of mission.

“They were spotted by anti-coalition sympathizers, who immediately reported their position to Taliban fighters. A fierce gun-battle ensued between the four SEAL’s and a much larger enemy force with superior tactical position,” Danny radioed for help, and a responding Chinook helicopter was shot down by a rocket-propelled grenade, killing eight more SEALs and eight Army Night Stalkers. It was the worst single combat loss for the SEAL’s in SEAL history until August 6, 2011.

In honor of his fallen brothers, Marcus Luttrell, wrote the eyewitness account of Operation Red Wings and the Lost Heroes of SEAL Team 10 in the NY Times best-selling book Lone Survivor. The book adapted to a critically acclaimed feature film by Universal Pictures and debuted in 2013.

The Axelson family launched Axelson Tactical, a precision firearms company, to honor the sacrifices of Matt and all those like him. The guiding principle for all Axelson Tactical products is that in the toughest moments thoughts should not be on the gear you carry it should be on the safety and well-being of those next to you. The Axelson Tactical line includes complete precision rifles and handguns plus tribute rifles, parts, accessories and gear. Axelson Tactical is a founding partner of the Veteran’s Family of Brands (VFOB).

ABOUT THE VETERAN’S FAMILY OF BRANDS:

What if every time you purchased an outdoor product, you were supporting Veterans and their families? The Veterans Family of Brands, LLC was founded by several former military members and Gold Star family members who had had enough of watching the VA fall short of serving our wounded heroes in need! The VFOB is an organization with a mission focus to become the Forward Operating Base of Veterans and their supporters through the facilitation of high quality products and financial support for vetted charities. VFOB provides a platform for companies, dealers, and individuals to lock arms and become members of this mission. Individuals, likewise, who resonate with the mission, have the opportunity to be coin carrying members, openly showing their support through action! In addition to Axelson Tactical, member companies include Snake River Shooting Products (Team Never Quit Ammunition), Gnat Warfare, Reaper Outdoors, SEAL 1, Grunt Style, Triumph Target Systems and Sinterfire Ammunition. More information can be found on individual memberships as well as the VFOB in general at www.veteransfob.com.

GunBroker.com is the world’s largest gun auction website. Launched in 1999, GunBroker.com is an informative, secure and safe way to buy and sell firearms, ammunition and hunting/shooting gear online. GunBroker.com promotes responsible ownership of guns and firearms. Aside from merchandise bearing its logo,GunBroker.com sells none of the items listed on its website. Third-party sellers list items on the site and Federal and state laws govern the sale of firearms and other restricted items. Ownership policies and regulations are followed using licensed firearms dealers as transfer agents.

Media Lodge has assembled a unique set of assets to engage with over 30 million monthly enthusiasts in authentic and powerful ways. In addition to its outdoor media assets, Media Lodge has become the largest outdoor media platform, helping brands engage with enthusiasts across the best websites and exclusive, leading commerce engines. Additionally, Media Lodge has invested heavily to ensure partners understand their customers, research their competitors and realize manufacturing efficiencies. For me information please visit www.medialodge.com