Visiting Lancer Systems’ homepage will probably surprise most shooters who know its firearms parts, as the company actually manufactures precision parts for a handful of markets and is fairly large. Their experience in aerospace, carbon fiber and ceramic composites, seals, bearings, offshore drilling rig components, etc, transfers over to the commercially-available firearms and components listed on its webstore. While I have long-since been familiar with Lancer’s L5AWM AR-15 magazines, and have considered them my hands-down favorite since first discovering them, I had never played with Lancer’s other products. That all changed in late 2014, when I picked up one of their dead sexy carbon fiber handguards and an L15 lower receiver. . .

Unfortunately, I’ve been waiting on a new barrel for my 9mm AR-15 for months now, and I haven’t yet had the chance to do more than fondle and stare at the extended length, carbon fiber handguard. It has been slated for this AR build, and will cover the 5.5″ barrel plus all but an inch or so of my Liberty Mystic suppressor. Should look sweet, but it’ll have to be reviewed in the future as a separate gear review. 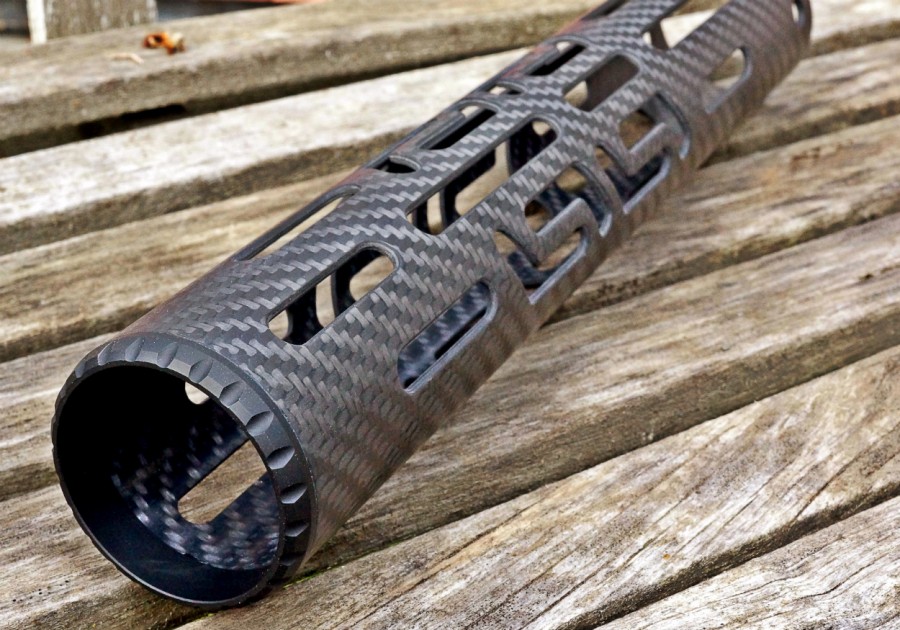 Now, there are a few ways to get one’s hands on an L15 AR-15 lower receiver. It can be purchased as part of a complete Lancer rifle, or it can be purchased without an upper in various states of build — either ready-to-run, fully assembled with Ergo grip and a couple choices of triggers and stocks, or stripped. At least, as stripped as it can be since two of the parts are proprietary.

Lancer’s L15 lower contains an oversized magazine release button, which is a proprietary shape and nicely integrated into the styling of the receiver. It attaches in the normal spot, but it extends downwards to the top of the trigger guard, which does make it easier to reach. Also residing on the right side, above and to the rear of the mag release, is a bolt release lever. It doesn’t work as a catch, but it’s an effective bolt release that’s easy to reach with the trigger finger of one’s right hand, which is likely already indexed in that very area during a magazine change. For a left-handed shooter, it will allow for dropping the bolt with his or her right hand, which is the mirror image of the standard battery of arms for a righty on a standard rifle. The bolt release on the left size isn’t modified at all for this functionality, so any parts kit or aftermarket piece should still work fine.

In the case of an assembled lower, it ships with a standard safety lever so isn’t ambidextrous there. However, the selector barrel has an indicator notch on the right side and the receiver is engraved with “SAFE” and “FIRE” on the right side as well. Any aftermarket, ambi safety selector will work on the L15 lower. The ambi bolt release is nice, but the L15’s real trick up its sleeve is interchangeable magazine wells. Lowers, whether assembled or stripped, can be purchased with one of three magazine wells included — standard, tactical, or competition — and all of them are available separately as well. The variable here is the size of the magwell’s flared mouth, with a larger opening assisting in faster, easier magazine insertion. Mag wells are easy to swap. On the front, a groove in the magwell indexes with a lip on the receiver, and on the back, a standard AR-15 pivot pin holds it securely to the oversized trigger guard. A spot of foam rubber in the magwell’s front groove ensures there are no rattles. Before receiving the receiver, I was a little worried that a swappable magazine well could lead to a lip at the transition of magwell to receiver — something the magazine could get caught up on. Not the case here, as fit is very precise and the entire transition from flared to straight happens in each of the magwells. Considering the L15 receiver’s large deviations from mil-spec standard, I was surprised to find that it’s made from a forging rather than machined from billet. Although I’m not entirely convinced that I should care for my purposes, it has been stated by many smart engineering types that a receiver forged into its near-finished shape is inherently stronger — that is, stronger than one machined from a forged billet — for reasons of metal grain structures following shapes in the receiver. Most notable of these shapes is the threaded flange into which the buffer tube mounts. Although I have never broken one, it’s probably the most common point of failure on a lower.

Forgings come out rough, though, and still need plenty of machining to finish them up. In the case of Lancer’s L15, the magazine well is broached, which is considered more accurate than milling, and the rest of the machining is clean to the point of flawless. It’s smooth and crisp and free of tooling marks. The MIL-A-8625 TYPE III CLASS 2 hard anodizing is even and looks just right. It’s a nice piece.

The more-or-less diamond shape of the carbon fiber stock, which can be purchased on its own, allows for a comfortable and solid cheek weld from either side. It’s a nice departure from a market dominated by round options. On the rear are various provisions for sling mounting, including a steel QD socket insert. Non-adjustable, but available in A1 (10.25″) or A2 (10.8″) length. As you may expect, it doesn’t add much weight to the buffer tube (9.4 oz), although the polymer used at front and rear is extremely dense and feels very strong. It’s definitely good looking, although I admit to this stuff rekindling my carbon fiber lust, plus having a general preference for fixed stocks — an ACE Skeleton is on my go-to AR, and I have an ACE UltraLight on the way for the soon-to-be-an-SBR CZ Scorpion.

I’ve had the L15 for about four months now, and have swapped back and forth between all of the magwells a few times. However, it’s the competition magwell that is on there now and that has spent the most time on the lower, and I doubt it’ll come back off. It looks cool and it’s a lot of fun to use. It also makes a great hand grip for shooters who like to grab the front of the magazine well. The L15 has been my test platform for AR parts recently, as seen in the Hogue review and the Velocity Triggers review (at least in the video), and it’ll probably pop up in the other trigger tests as well. There are a couple other Ergo grips here, a Strike Industries Ultimate Selector Switch (seen being tested on the lower in the Hogue review photos), and another stock on the way, too, so don’t be surprised to see more of this L15 in the future.

I’m digressing a bit, but this is basically the roundabout way to say that it’s a cool lower to look at and it’s also nice when out shooting with it. I like the size and shape of the trigger guard, I like the swappable magwells and slamming magazines into the tactical and competition ones, I like the larger magazine release button and I have even gotten quite used to using the trigger-finger bolt release, which I find intuitive and fast. It feels like a well-made, high quality piece.

Nothing’s perfect, and I do have a couple of L15 nits to pick. As you can see in the photo above, the design of the right side bolt catch leaves minimal room for the front trigger pin. While this is a total non-issue with any standard trigger pin, and works fine with the CMC C-Clip ones seen above, it’s a show stopper for most anti-walk trigger pin kits out there. KNS is a no-go, Elftmann Tactical is a no-go, and I think the bolt heads on most other kits would be too big to fit in the receiver’s pin relief there.

Magpul Gen M3 magazines have a pronounced flange — an overtravel stop — on the back spine of the mag body: This lip hits the L15’s magwells and prevents full insertion. It’s really darn close, but the the 30- and 40-round mags won’t lock in. The 10-rounder, with its ever so slightly smaller rear flange, does work. This was disappointing but, to Lancer’s credit, it had already designed these magwells before the Magpul Gen3 mags were released, it definitely isn’t the only receiver on the market that has this specific “issue” (see Nick’s review of the Gen M3 mags), and filing down that magazine flange by a millimeter or two would be quick and extremely simple. Or, just use basically any STANAG-ish mag on the market — I tested with Lancer’s magazines in 10-, 20-, and 30-round flavors, a Troy Battlemag, a CAA MAG17, and a couple of Gen2 Magpul mags and they’re all just fine.

Finally, this is not an inexpensive receiver. MSRP for a stripped version is $250, and they’re available online for as low as ~$187. Purchase it assembled where you’re paying for the trigger, buffer tube, buffer spring & weight, buttstock, grip, bolt catch, selector, pins, etc, and the total goes up accordingly. There are infinite ways to build an AR-15, and stripped, aluminum lower receivers can be found for as cheap as $50. Considering the lower is the actual, serialized “firearm” part of the gun though, which you’ll most likely own and shoot for many years, I don’t think it’s the part to pinch pennies on. Every single other part can easily be upgraded any time — even ordered online and delivered right to your door — but the lower is the gun, and it’s sort of the glue that holds all of the other parts together anyway.

Although I usually don’t bother, you’ll notice that the serial number has been blurred out in the photos above. This lower was a loaner from Lancer, but I intend to keep it. Paying the $200 tax to make an SBR on an AR-15 lower really hasn’t been a particularly serious consideration of mine, but I’m now leaning towards going that route with the L15 here. I think it’s worthy.

Ergonomics: * * * * *
Enlarged trigger guard, ambi bolt release, oversized mag release, swappable magwells. All of those things are great and come on the stripped lower. Looking at the as-tested version, the stock is great and the Ergo grip has long been my go-to.

Reliability: * * * * *
It’s been a great little workhorse. No issues swapping parts around, not a single hitch while shooting, and no scratches on the receiver despite tossing it in boxes of other parts, bouncing around in the back of my rig, during parts swaps, etc.

Fit & Finish: * * * * *
The machining is excellent, the anodizing is excellent, and the parts fit and tolerances are excellent. The only very minor exception is that the pin on my competition magwell is a bit sticky. Outside of that, it’s absolutely 100% across the board.

Trigger: n/a
The CMC trigger will be reviewed separately as part of the ongoing AR-15 drop-in trigger roundup. Plus, the L15 can be had stripped, with a standard trigger, with the CMC, or with a Hiperfire in some cases.

Customize This: * * * * *
Swappable magwells are a plus, but the proprietary magazine release and right side bolt release aren’t customizable. However, the rest of the lower is effectively mil-spec and parts can be changed and upgraded as desired. Certainly, the AR-15 platform has few limitations for customizing and this receiver gives even more options than most.

Overall: * * * * *
There was a $200 charge on last month’s AmEx bill for the CZ Scorpion’s Form 1. I’m waffling on going two in a row, but if it happens it’ll happen on this L15. The lower itself is a solid investment, and removing the barrel length restriction seems like it would further up its stock and its utility for me.