I have a soft place in my heart for rimfire rifles and and an extra soft spot for Ruger rimfire rifles. My first gun was a 10/22 which still keeps chugging despite the tens of thousands of rounds of poor quality ammuntion, dirt, and poor maintenance I’ve thrown at it over the years. And while it has been a great gun, there’s something to be said for having a bolt action gun in the safe. Especially for teaching new shooters the finer points of marksmanship. Enter the Ruger American Rifle in .22 LR . . . 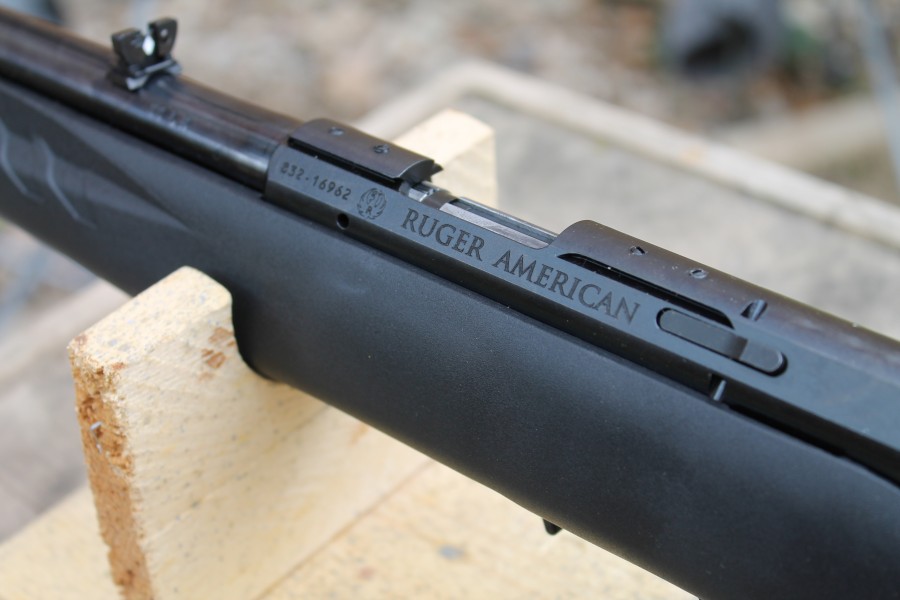 Our test model is the Standard model which sports a 22 inch barrel and 13.75 inch length of pull on the buttstock. The RAR is also available in a Compact model which features an 18 inch barrel and 12.5 inch length of pull. Additional buttstocks are available from Ruger for those who like a shorter LOP on a long barrel rifle or a longer LOP on a Compact model. The RAR is also sold in .17 HMR and .22 WMR flavors. However, our test model is a .22 LR version. Introduced late in August of 2013 (link for the presser here), the American Rifle boasts some really nice features for not a lot of money. Starting at the back and moving forward, I immediately noticed the aforementioned interchangeable buttstocks which allow for a “low” comb for iron sight shooting, and a “high” comb for use with optics. Additionally, the short and long length can be swapped out from the Compact and Standard versions. The high and low comb addresses one of my major issues with modern bolt guns as most manufacturers still see fit to use a low comb on rifles shipped without irons.  The combs are easy to change as they are a friction fit locked in place with the rear sling swivel. I managed to swap them back and forth in less than five minutes. Further forward, the RAR has a crisp trigger that looks suspiciously like a Savage AccuTrigger, but isn’t. This test model breaks cleanly at 3 lbs with zero takeup or creep. Astute readers will also notice that the RAR takes the same detachable rotary magazines as its sibling, the 10/22. That alone is a major selling point for me. I hate how many different magazines I’ve collected over the years and having readily available, cross-platform magazine functionality is awesome. Flipping the gun over reveals a very well thought out receiver that includes machined dovetails for 3/8″ tipoff rings, and mounting holes for Weaver #12 Bases. Worrisome though that the set of tipoff rings that worked so well on my 10/22 don’t seem to fit here. It appears they were made for a different shaped receiver than what I have in my hands. I wasn’t able to find a recommended set from Ruger, but I’ll keep researching. Either way, this gives the owner of a RAR the flexibility to utilize the mounting system of their choice. Forward of the receiver is a familiar sight (pun intended). Ruger has elected to utilize a rear dovetail, and fiber optic front. I’ve never been a huge fan of this arrangement as I prefer a ghost ring rear. However, the Williams front sight is VERY bright and nestles naturally in the V. The screw pattern on the rear two receiver screws matches the 10/22 perfectly and TechSights advertises their MXT 200 as being a perfect fit for those that prefer the longer sight radius and easy sighting a ghost ring provides. From a cursory once-over and some limited dry fire, I’d say Ruger has a winner on their hands. This rifle is a great choice for the novice shooter or experienced pro. Once the fundamentals of iron sight shooting are established, a scope can be added, the comb can be swapped and you’re off to the races. Additionally, the move to a 10/22 will be very easy given a similar sighting system, and the cross-platform magazine compatibility. While .22 LR is rarer than hen’s teeth at the moment, supply will eventually catch up with demand, and we can go back to enjoying the finer points of plinking. If you happen to have a cache of ammo, or know that one day you will, Ruger wants you to grab one of these guns. Before you do, stay tuned over the next month or so while we put the RAR through some testing to see if first impressions last.