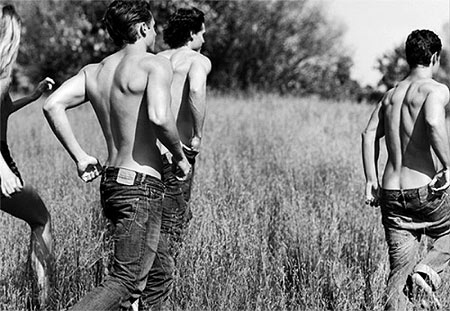 Have I mentioned that I’m the dad of a 13-year-old female? Did I let it slip that, this week, I became her “custodial parent,” and she now lives with me, full-time? Or that, looking ahead, I plan to put the Fear Of God into any boy who dates my daughter? (When the time comes that she’s old enough to date, of course – I’m still looking into nunneries, and we’re not even Roman Catholic.) So it’s with that prologue that I state, for the record, I can understand why a dad would want to go all Dirty Harry on not one, but two nekkid boys [Editor’s Note: the late, great Southern writer/humorist Lewis Grizzard defines “Naked” is defined as a state of undress. “Nekkid” is when you are naked and up to something.] found in his home with an equally-nekkid daughter. It’s an understandable reaction. But it’s a really stupid idea, and completely irresponsible behavior for a CHL holder. To wit, this little gem from the Seattle Post-Intelligencer . . .

A Kent man accused threatening to shoot his 17-year-old daughter’s boyfriend after finding him naked in his home has been charged with assault.

King County prosecutors claim Timothy Wayne Gooden threatened to shoot the 16-year-old boy after coming home on July 11 to find the teens in his home. Gooden, 40, is also alleged to have pointed the loaded pistol at another teen in the home.

You can argue that he violated one of the four rules  – never point your gun at anything you don’t intend to shoot/kill. Given I’m a dad, too, not sure you could really comment on ‘intent’ at that point. If Gooden intended to kill two unarmed (obviously – I mean, where would they conceal weapons?) kids, I’m thinkin’ that perhaps he’s let the ‘heat of the moment’ impair his judgement, ya know?

“The defendant returned home unexpectedly to find his daughter’s boyfriend and another friend were at his house,” Deputy Prosecutor Christina Miyamasu told the court. “The defendant responded by loading a round in the chamber of a pistol he held in his hand and pointing it directly at both boys.”

“Responded by loading a round in the chamber?” You mean, he doesn’t carry with one in the pipe? That’s pretty irresponsible for a vastly different reason.

Apparently, the kids heard dear ol’ dad drive up. Harlot O’Hara instructed her two boy toys to go hide in the bathroom. Dad was evidently not fooled, and demanded she turn Quisling on her paramour(s). When he found the first boy, he drew his pistol, cocked it (is it fair to assume the boys were already ‘cocked and locked’?), and pointed it at the nekkid yoots. According to the charges filed, Gooden claimed he could shoot the little rapscallion for “breaking and entering.” (His HOUSE. Get your minds out of the gutter.)

He went on to opine, “I have every right now to blow your brains out!” I’m not familiar with Washington State’s Castle Doctrine (if they even have it), but I suspect it requires that homeowners pass some legal tests like “did you feel your life was in danger” or “the assailant broke in” or even “he was violently assaulting me or a family member.” And of course, if that family member was alive to tell the tale, so to speak, I’m not sure she’d have daddy’s back, when it came time to testify, if you know what I mean.

The boy later told investigators Gooden punched his daughter and made both of them sit on the apartment floor, according to charging documents. Prosecutors contend Gooden held them there for about an hour and hit his daughter several times.

Gooden eventually discovered that there was an additional set of boy’s clothing, lying scattered about in his daughter’s bedroom. He threatened to start shooting up the closets, until he discovered the third member of the menage á trois in the bathtub. (Don’tcha know that porcelain got really cold? And remember what they say, “All men – and presumably boys – are equal in the cold.”)

“Gooden punched him in the chest and then tried to hit (the teen’s) face,” Kent Detective Matthew Holmes told the court. “Gooden had the pistol in his hand and told (the teen) to sit on the bed with the others.

Well, I guess his attorney can point to fact that he didn’t pistol-whip the kids as evidence of Gooden’s restraint?

Writing the court, the detective said Gooden held the three teens in the apartment for another hour. During that time, he is alleged to have slapped his daughter 50 to 100 times, leaving her face red and swollen.

You’ve got to wonder, what was the father’s end-game here. Seems, daddy did not have a winning exit plan in mind. After two hours of this fun-fest:

The girl’s boyfriend was eventually allowed to leave; he returned with his father, who called 911. Kent officers contacted Gooden and his daughter at 8:30 p.m.

Under the “Hey, I’ve got to live with him, so I’m willing to bend the truth a little to save my own promiscuous hide” clause, the 17-year-old offspring of our IGOTD claimed that he’d shoved her – once – and “displayed” his firearm, but she denied he’d pointed it at either of the kids, and denied he’d hit her.

It’s a far cry from “hit her 50 to 100 times, leaving her face red and swollen” to “he pushed me but never hit me.” I’m thinkin’ the forensics on that one are gonna make proving/disproving the physical assault charges (on her, anyway) pretty easy.

Dad’s account of the story is, shall we say, just a wee bit different from the picture painted by the two randy teens:

Speaking with police, Gooden said he was upset when the boy came out of the bathroom and yelled at him, according to charging documents. He allegedly went on to claim he realized his pistol was on his hip, so he went to his bedroom to put it in a dresser drawer.

Gooden, the detective told the court, claimed he threw items around the apartment and slapped his daughter’s arm after finding the naked youth but denied pointing a gun at anyone. Investigators noted that Gooden had a valid concealed weapons permit.

So Gooden was charged with Assault in the 2nd and 4th Degrees. (We’ll have to wait for the TTAG legal team to weigh in on the particulars of these charges. I’m not a lawyer, nor do I play one on TV.) He has not been jailed on the charges.

If I may stick my nose into this one, opinion-wise, I’d like to reiterate, I feel for the dad in this situation. But I think if the boy’s story is true, he screwed up, big time. (No comment on if the girl screwed up, but I think we can all presume that odds are, this wasn’t her first, um, rodeo, if you know what I mean and I think you do.) I’m going to make a couple of assumptions here – that Gooden is a single dad (no mom was mentioned in the article) and that (based on societal trends and her behavior) been what I’d see as fairly permissive. (I have no way of knowing this for a fact, of course, but go with me for a second.)

I can tell you that if you start to worry about your daughter’s sexual mores when she’s seventeen, it’s your own damn fault as to the way she behaves. The time to teach her the difference between right and wrong is back when she’s young enough that she’ll actually listen to you. Waiting until she’s seventeen to get all righteously indignant and go from “permissive” to “Puritanical” is just not gonna cut it. And this is NOT the kind of situation where unholstering (or even flashing) your concealed weapon is warranted, if that did actually happen.

If you buy the dad’s story, taking off your gun and ‘securing’ it in a dresser is equally-stupid. What would have prevented one of the kids from getting the gun and killing the dad?

Here’s what I (think) I would have done, had I been in Gooden’s shoes. I would have called the police. I would have gotten out my cell phone and started to document the scene with the video camera function. Nothing prurient – but to show the clothing in the bedroom. I would have demanded the boy(s) come out, and would have allowed them to cover themselves.

I would have insisted they stay, and when the police arrived, I would have filed charges against them for statutory rape, making them face the prospect of a lifetime labeled as “sex offenders.”

And then I would have packed up my daughter, put her in the Wagon Queen Family Truckster, and hied her to a nunnery, PDQ. But that’s just me.

So, congrats to Timothy Wayne Gooden, a dad who, understandably or not, is now likely facing jail time, the loss of his conceal carry permit, and a lifetime of membership in the annals of the TTAG Irresponsible Gun Owner of the Day.