While browsing the discount section of a local gun store I stumbled upon a Howa 1500 in .300 Winchester Magnum. I had been wanting to add a .300 Win Mag to my collection, and 40% off an already-low MSRP was too good a deal to pass up.

Howa-bout a little history? Howa is a Japanese manufacturing company specializing in construction equipment, industrial tools, and firearms. Howa has been around since 1907 and in the firearm business since 1940. They have made everything from Arisakas and AR-180s to rocket launchers and flamethrowers. Howa also currently produces the Vanguard rifle for Weatherby, which is essentially a Howa 1500 with a different stock.

You can get a Howa 1500 with a simple synthetic stock or a modern chassis and in just about any popular caliber. Howa even sells barreled actions with no stock so you can build a custom rig. I picked this one up chambered in .300 Winchester Magnum with a 24” medium contour barrel and a simple, synthetic stock. It came ready-to-hunt, with a variable zoom scope already mounted in rings on the 1500’s two rail sections. Current models, such as the Gameking Package, include a Nikko Stirling 3.5-10×44 scope on a one-piece, Picatinny base. All for about $569, too.

The Howa 1500 features a three-position safety, which allows the shooter to unload the rifle while on safe or to lock the bolt shut. This is a great feature to have when on a hunt and lugging your rifle through dense brush or up a blind. The safety lever is smooth, quiet, and the three positions are well defined. The polymer stock is tough and well made. It includes two sling studs and a recoil pad, which helps with grip however does almost nothing to reduce felt recoil. 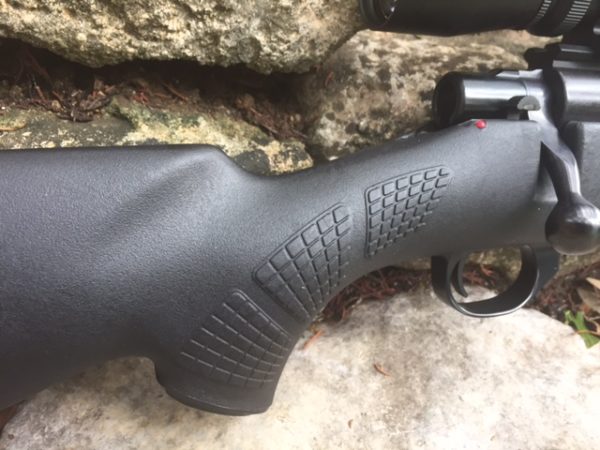 The two stage trigger has minimal take up and a clear wall before the crisp break. I found the trigger to be smooth right out of the box. It’s not a target trigger by any means, but it’s good enough for a hunting rifle. Timney makes a replacement trigger for the 1500 but I would upgrade to a free-float stock before I swapped the perfectly acceptable trigger. The forged bolt’s fit and finish is on par with other entry-level rifles. It’s neither cheap nor something to fawn over — it earns a solid “it’s aiight” with accompanying shoulder shrug. The bolt does cycle smoothly and extracts rounds with authority thanks to its M16-style ejector. An engraved “87” under the bolt handle appears to have been done with an electric hand engraver. I assume it’s a quality control mark, but I was surprised at its hand-written appearance rather than being done on a CNC machine or with stamps. Not a big deal, of course, but I thought I’d mention it. Out of the box accuracy is acceptable for a hunting rifle at this price point. The barely over 1 MOA group above was shot with Federal Non-Typical 150 Grain. The Howa is accurate enough to satisfy the average hunters’s needs, but left me wanting more. This rifle could really benefit from a free-float stock. I printed this 2 MOA group using Federal Premium EDGE TLR 200 Grain. No matter what I shot through it I couldn’t get a group under 1 MOA. The Howa 1500 could really benefit from a free-float stock. Jeremy and I had some extra time to do more extensive testing than normal. We all know the .300 Win Mag can take anything with four legs in North America, but what can it do to something with four wheels? We theorized that a carefully placed round fired through the trunk of a modern American classic would travel through the passenger compartment and enter the stereo unit rendering it even more useless. After a few attempts, our theory was confirmed. Good scientists are always questioning and exploring. Questions like “What happens when you shoot an airbag with a .300 Win Mag?” have plagued mankind for far too long. Jeremy, TTAG’s science desk editor, applied a little science to this question. We were surprised to see the 15 year old airbag deploy. We also tested our theory on an old Mercedes. This time the airbag failed to deploy properly, however it did catch fire. More testing is required before a conclusion can be made.

I have just over 20 years of shooting experience, but somehow I had never fired a magnum rifle cartridge until purchasing this Howa 1500. I very much enjoyed shooting something with some real kick. The Howa proved to be a good shooter for the price. It’s at home in the field and can be setup for tacticool applications as well. I would have preferred a better recoil pad, better grip surfaces, and a threaded barrel. Oh, and a free-float stock.

For the money, though, the Howa is a great option for putting meat on the table or for turning into a custom rifle build project.

Ergonomics * * * 1/2
The stock is comfortable, but could really use a better recoil pad and grip surfaces.

Customize This * * * * *
Timney makes a great trigger. You can upgrade the stock with a Hogue, walnut, Archangel, or a modern chassis that takes AR grips and stocks. A threaded muzzle would have been great.

Accuracy * * * 1/2
Just above 1 MOA was the best I could get. A free-float barrel definitely would have helped.

Overall * * * *
The Howa 1500 is a great field rifle. You won’t lose sleep worrying about scratching it. It’s accurate and powerful enough to take any North American game you point it at. Overall I like it. I wouldn’t hesitate to recommend this rifle to a friend, as long as they have a tough shoulder.