Radical Firearms of Stafford, Texas is well-known for its billet AR-15 and AR-10 receivers, its complete AR rifles in many calibers, and its AR platforfm parts and accessories, all of which are offered at surprisingly low prices. For example, a complete AR-15 with free-float rail at an MSRP of $559.99. Earlier this year they entered the suppressor game, once again offering a product at prices that undercut nearly the entire rest of the market. The model I’ve been putting rounds through is the RFSS223, sometimes referred to as the RF 5.56. MSRP is $399.99 but it’s available via SilencerShop for a scant $350. I was curious how one of the very least expensive 5.56 cans available performs, so dumped a few hundred rounds of CapArms ammo through this thing in short order. 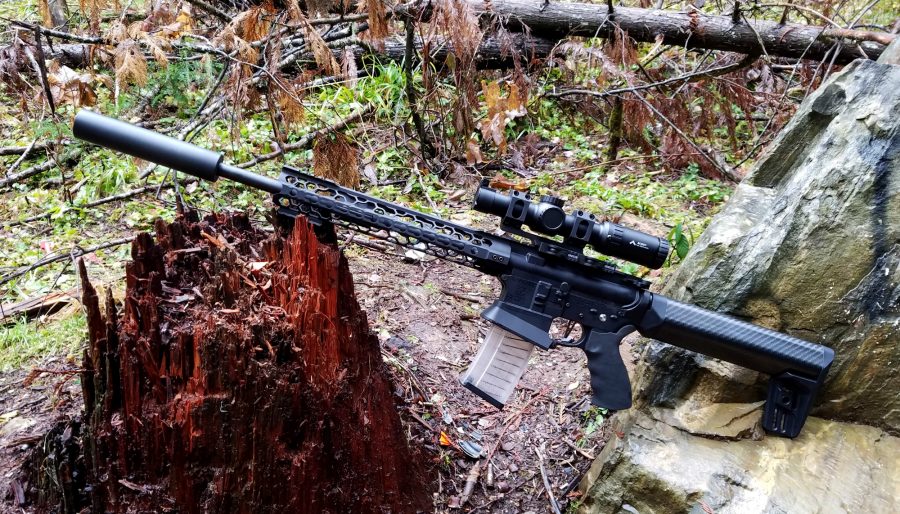 First, some stats. The RF 5.56 is made entirely from 316L stainless steel. It’s 7 inches long, 1.5 inches in diameter, and it weighs 20.7 ounces on my scale. It’s finished in high-temp Cerakote. What this all means is that it’s a bit longer and heavier than your average 5.56 suppressor, and due to the materials choice it is not full-auto rated. It is rated for use on as short as a 10.5-inch barrel, though, and carries a lifetime warranty as long as you don’t violate those two restrictions (no full-auto, 10.5+ inch barrel). I actually bought an endoscope so I can look inside of (and take photos and videos inside of) suppressors, barrels, and other interesting things. This is the first baffle of the RF 5.56 when it was clean. It’s a used can, but was freshly cleaned before I borrowed it. The machine work is interesting, and I wonder if that scalloped-like machine path pattern on the baffles — it’s on all of them — might actually help to capture gas and heat. The RF 5.56 is a fixed-mount can with 1/2-28 threads. That little bit of “free bore” before the threads start seemed to help align the suppressor while installing it, whereas when the threads are flush with the base a suppressor (or other muzzle device) tends to wobble around and even more care is necessary to prevent cross-threading. 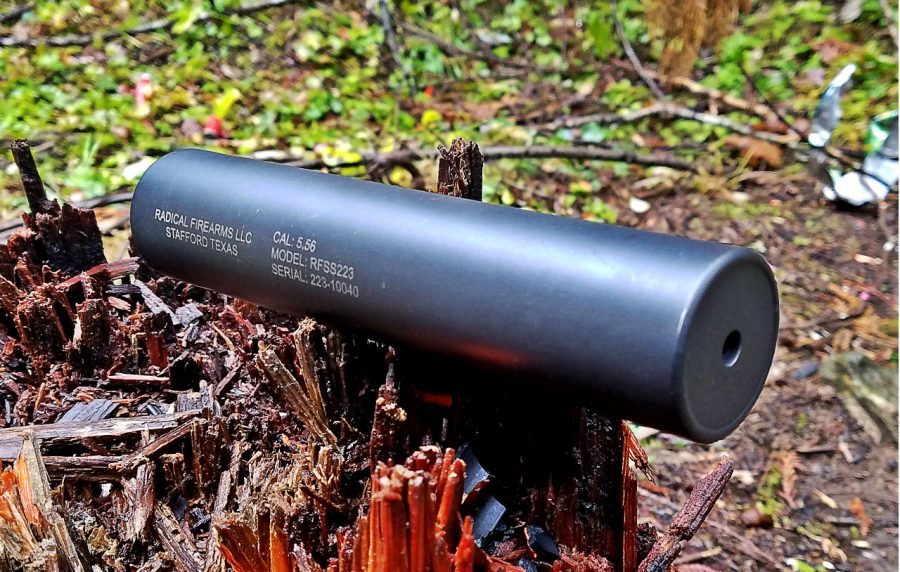 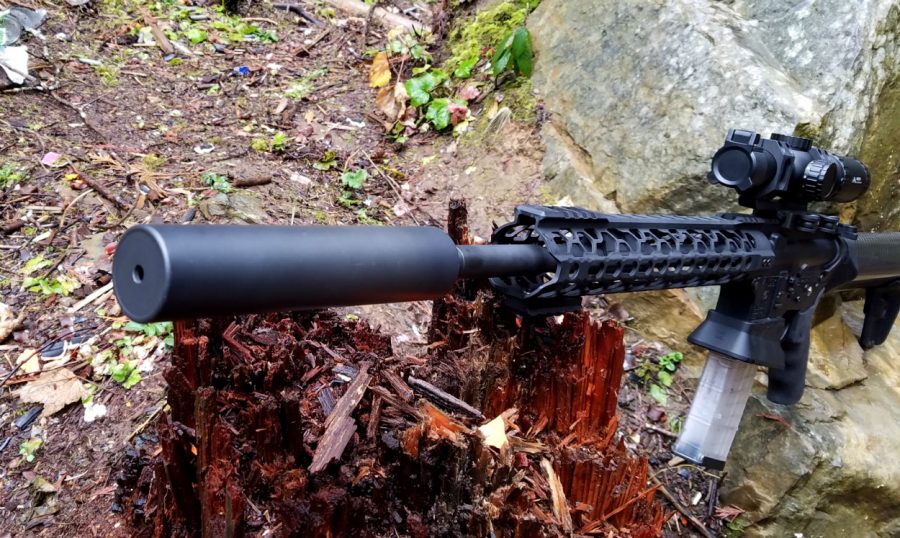 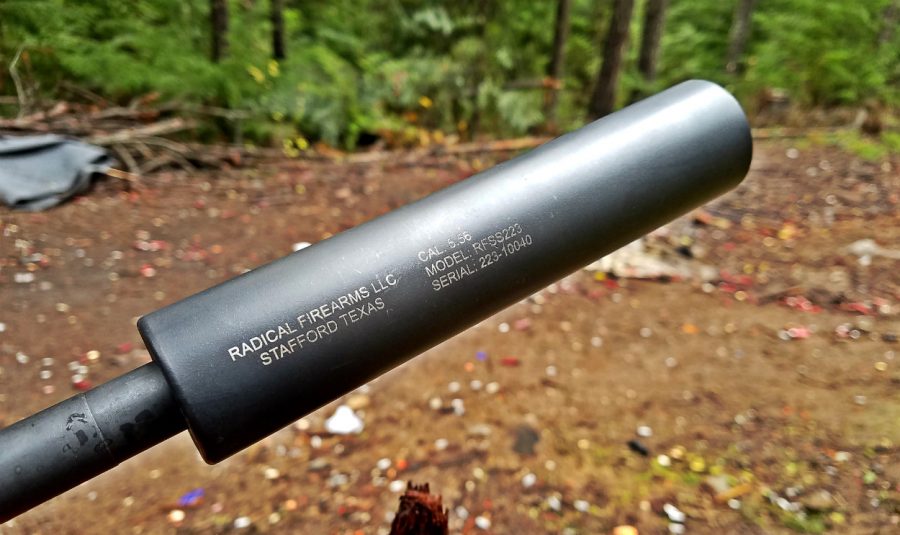 It threaded on and shouldered up to my rifle every time without issue.

Regardless, I choose to wear ear protection whenever possible when recreationally shooting even a suppressed AR. In the case of the RF 5.56 on my Adams Arms upper with the XLP gas block turned way down, the lack of concussion, blast, and volume was extremely apparent. Most of the noise I heard seemed to be coming from the action through the stock thanks to my cheek weld rather than from the muzzle of the firearm.

Doing some shooting without ear pro, I found the volume level loud but comfortable. No pain, discomfort, or ringing at all. Most of the volume in this case seemed to be from the supersonic crack of the bullet, although upon switching to my Dead Air Sandman Ti (a .30 cal can on which I installed the 5.56 end cap) I do believe the RF 5.56 has a slightly higher pitch to it. Not meaningfully or obviously so, but it was there and, in general, lower tones are subjectively perceived by most as being quieter, even if the actual measurement in decibels is the same. 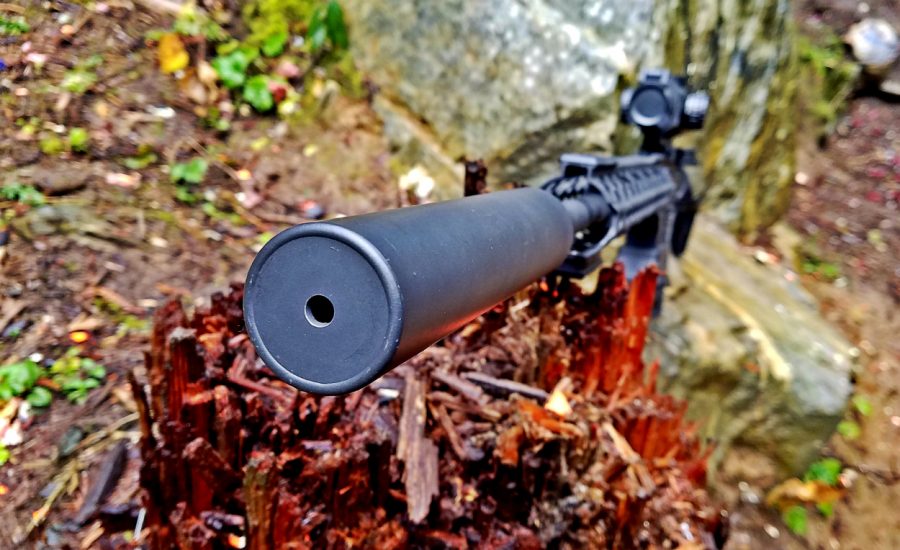 I believe backpressure from the RF 5.56 may be a little bit higher than average. It was pretty gassy even on my piston gun, as a lot of gas jetted back out through the chamber and ejection port as soon as each case was pulled out of the way. I’d want to tune my rifle better if I was planning on doing any sort of volume shooting with the RF 5.56 on it. Total non-issue for low rate of fire use, but when burning through magazines rapidly the gas was bothersome. Likely I’d start by adding mass to the reciprocating parts, but I think a mid-length or rifle-length gas system and/or a gas block that has finer adjustment settings would go a very long way.

This isn’t to say that the RF 5.56 is unique in its backpressure or a real outlier; just maybe a bit higher than the norm. Definitely a little gassier than my Sandman, which I shot back-to-back with the RF, but obviously that’s a .30 cal can so it has some advantages like more internal volume and a larger bore diameter. 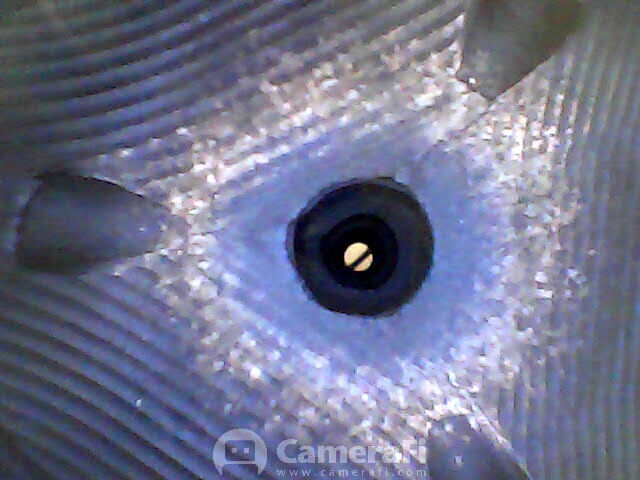 I got the can about as hot as I think is appropriate while staying within the “no full-auto” edict, dumping three magazines through it in rapid succession followed by some “normal” target shooting, then another couple mags in short order for the video review. This suppressor was scorching freakin’ hot, vaporizing rain drops and smoking like Denis Leary. The Cerakote actually held up, which was a surprise to me.

Based on the internal photos I got of the blast baffle, I think it’s likely fair to say that there is a very minor amount of bore erosion on this well-used suppressor — a rounding of what I’d guess were square edges when new — but that the amount of shooting I did didn’t add to that.

Minor point of impact shift was experienced, as you’d expect any time over a pound of weight is added to the end of a barrel. Actual accuracy — group size — stayed within what I’d call the margin of error since I shot only a single, five-shot group to make sure nothing wonky was going on. It wasn’t, and accuracy was completely typical for this rifle.

The RF 5.56 does exactly what it’s supposed to: it brings a ~167 dB gunshot down to hearing-safe levels, and it does it at approximately the lowest price point available. Despite that low price point and the lack of a full-auto rating, this no-frills can is still effective and plenty durable even for heavy shooting range days, competition use, or the like, and carries a lifetime warranty. 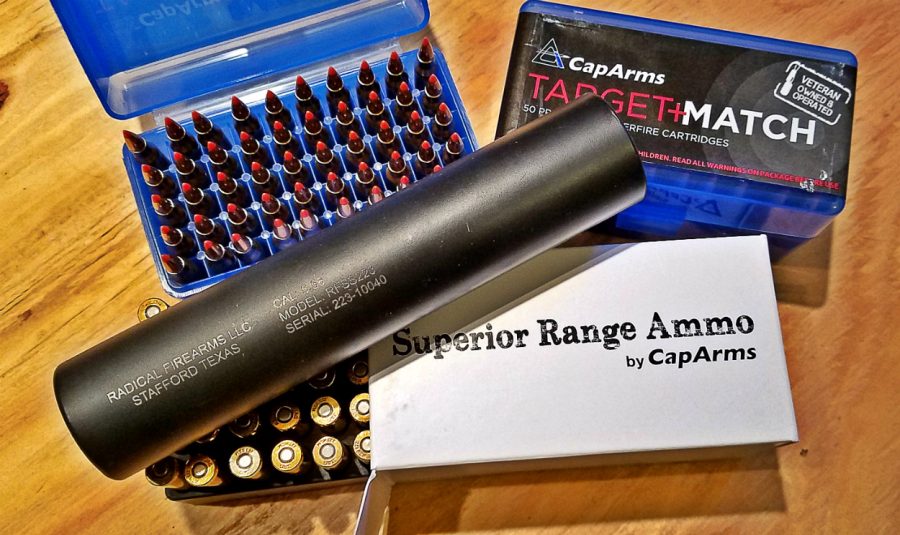 It’s a bit longer than many and heavier than most 5.56 cans, but this is the price you pay for the low price. The materials and construction methods save money, but add weight. I’d take that every day, though, over sacrificing noise reduction performance and/or durability, so Radical Firearms has struck the correct compromise.

Quality * * *
I think it’s fair to say this is an average-quality suppressor in materials, build, and finish. Maybe a bit lower than average, as a typical 5.56 can is actually “full-auto rated.” Taking the extremely low price into consideration, though, it’s perfectly serviceable and durable.

Form Factor * * *
No-frills design. It’s an aesthetically simple, direct thread suppressor. A few ounces on the porky side compared to your average 5.56 can. I found it entirely unobjectionable on a 16-inch barrel, though.

Performance * * * *
It’s a hearing safe 5.56 firearm muffler for $350. More than just hearing safe, actually, as a 30.5 dB reduction is fully competitive with much more expensive options. It may not be full-auto rated, but it’s definitely durable and Radical Firearms backs it up with a lifetime warranty. Possibly a little bit gassier than some other 5.56 silencers, but anyone planning on running a rifle suppressed full-time should plan on tuning for it anyway.

Utility * * *
Most 5.56 cans are inherently limited-utility, as they’re effectively restricted to centerfire rifle calibers of .224 diameter or smaller. For most people, that effectively means just .223/5.56. Since it’s very rare for a 5.56 can to be user-serviceable (they don’t disassemble for cleaning), most would advise against shooting dirty rimfire ammo through one. So, the RF 5.56 is about average here. I don’t consider direct-thread to be a plus or a minus, as there are both advantages and disadvantages to various types of QD mounting just as there are with direct threading. How it affects you depends on your budget and your intended use, so I think it’s a wash. Personally, I like a direct-thread can. Utility may be hurt due to the lack of a full-auto rating, but that doesn’t affect me or most of us, and if you can afford to play with full-auto toys you probably have eyes on fancier suppressors anyway.

Value * * * * *
The RF 556 has one of the very lowest MSRPs of any 5.56 can on the market. For that money, it provides competitive sound reduction, is sufficiently durable, looks like a typical suppressor, and has a lifetime warranty. It’s a good or great value.

It would be a three-star silencer — barely…maybe two-and-a-half — if it were average price. But it isn’t average price, it’s one of the least expensive 5.56 cans available in the U.S.. For the sound reduction performance and the price, it’s a solid value.

The .223 ammunition used in the making of this review was provided by CapArms. Their sponsorship of most of TTAG’s review-related ammo needs is a huge help, allowing us to review more guns and more gear more thoroughly.