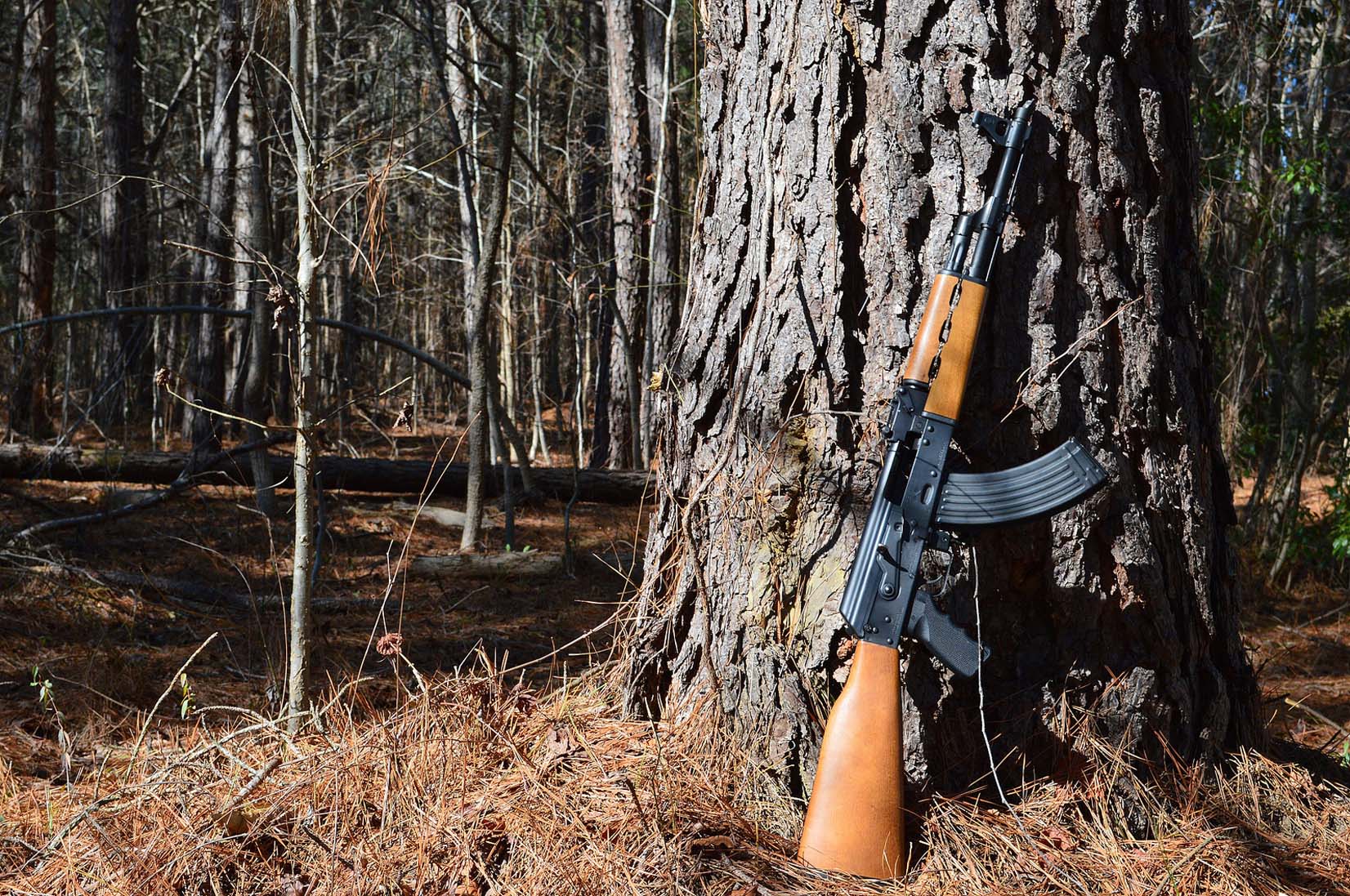 When the hardy Century Arms Zastava N-PAP rifle showed up at my FFL, I couldn’t help but imagine some massive Russian dude, disheveled as all hell, inspecting the gun and grunting, “iz good” with a nodding frown of approval. In fact you might become Sergei the Soviet Bear-Slayer if you shoot and carry the N-PAP enough. The teak furniture and LMG-style heavy duty receiver mean that the Serbian lead-slinger weighs a solid 8 1/2 lbs. loaded.While that might not seem like a new deadlift world record, 8.5 lbs. feels like 50 after hiking it through the woods for a few hours. But if you’re used to little black modern sporting rifles, you may find the substantial weight of the N-PAP inspires more confidence than an M4-gery. Is that kind of confidence substantiated? Let’s put the (former) Yugo blaster through the wringer and find out . . .

To start things off I’ll take a peek at the aspects of the gun you can test without firing a round. Yugoslavian, and thus Serbian, AK’s are unique in that they’re designed to hold the bolt open once the last round is fired. While this is no BFD on modern sporting rifles, most AK’s now-a-days (God, what am I, 80?) lack this feature as it’s not part of the original Kalashnikov design. The Serbian slayer also sports a chromed bolt – allegedly. If true it’s a Godsend if you’re going to utilize commie mil-surp corrosive ammunition or take horrific care of your rifle, as it will combat the erosion of those parts. But to me, it just looks like highly polished stainless steel. To be safe, I’ll clean her as if it’s not chromed to keep it in fine fighting form.

In addition, the N-PAP comes with a G2 trigger group, 2 magazines, a bolt hold-open safety and some bizarre make of side rail that looks like it works with both SVD & AK scope mounts. At first, you’ll praise the little notch thoughtfully added to the oversized selector switch, but you’ll soon grow to hate it. Part of your Russki bear bulk-up program is to retract the bolt and flip the safety up to hold it there. Here comes the tricky part: flip that switch down. In a word? “AARRRGGHHHH!” I’m pretty sure CAI owes me a few bandaids for that damn safety lever. This is why in my upcoming article on crucial upgrades for the AK platform will first and foremost list gloves. I’m fairly certain Mikhail designed the gun to be more dangerous to you under stress unless you’re a callous-covered partisan. It will loosen up with use, but in the meantime, wear protection. Next you’ll appreciate the raised comb of the N-PAP’s stock. At least you will if you’re using optics. The higher comb is excellent for scopes or red-dots, but it sucks for iron sights. You have to push your face against the dust cover to get low enough for a proper non-scoped sight picture. That’s fine with an AR, but the recoil of an AK is a little more stout, and for a new shooter it might result in a bloodied nose. A lesson not soon forgotten.

That’s not to say that the N-PAP isn’t user friendly. At least no less than any other AK platform. You still have the semi-awkward reloading procedure of rocking the mags into place – but that’s something that any experienced AK owner will tell you becomes much easier with practice.

For the N-PPAP the Serbs basically took the standard design of the Yugoslavian M70 and reduced some of the rigidness of the trunnion so that it’s still tougher than a standard AK’s but not as tough as the RPK’s (the LMG version of the AK47). Now, thanks to the efforts of a number of politicians, we can’t import these in their standard configuration straight from Serbia. Instead, Zastava has to import the guns with receivers that only accommodate single stack low-cap mags. The first generation N-PAPs to come stateside not only had the single stack mag well but also a bolt designed for it. Consequently the first N-PAPs earned a well-deserved reputation for spotty reliability. This, combined with the less-than-ideal Monte Carlo style stock, made the Gen 1 N-PAP a tough sell. Thankfully the guys at Century listened to their customers and managed to convince Zastava to send N-PAP’s with a more appropriate bolt and a square-backed receiver.

One of the more peculiar aspects of the N-PAP rifle is its side rail. The rail on the N-PAP is neither SVD nor Kalash yet can accommodate both. Or so I’ve been told. I had no issue mounting a Belarusian POSP or a Midwest Industries “MI-AKSM”. One thing I would note, though: both scope setups sat noticeably higher than when mounted on a Saiga rifle – thankfully the comb is higher, too. What does this mean to the consumer? Simply put, you now have access to a factory-built Century-slightly-modified Yugo cross-out Serb M70 AK rifle. Complete with reinforced receiver and hold open magazines. But you’ll miss out on a few things that M70’s used to come with. The N-PAP doesn’t come with a grenade launcher sight, a bayonet lug, or night sights of any type. These are clearly designed solely for import to the US, so they lack some of the military features. If you’re not a collector, the first two “shortcomings” won’t bother you in the slightest. The lack of night sights sucks, but in all fairness the majority of those we saw in the 2000’s were dead by the time they arrived anyway. 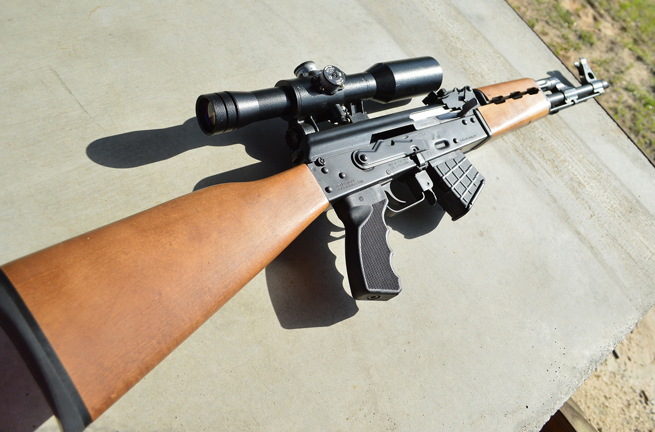 Another item to note about all Yugo/Serbian M70’s is their barrel is not chrome-lined. If you shoot corrosive ammo, you’ll want to clean your rifle as soon as it is cool enough to touch. The bolt and carrier, thankfully, are chromed and if Zastava started shipping these with chromed barrels they’d be ideal for shooting surplus ammo. So how does she perform, you might ask? I put 200 rounds of Wolf 124gr FMJ, 120 rounds of Brown Bear HP ammo , 80 rounds of Silver Bear soft point, and 100 rounds of Klimovsk (sp?) 123 gr FMJ (Despite the package it IS CORROSIVE) and experienced 0 failures of any sort. I tested all ammo in four kinds of magazines just to be sure: Romanian 30-round stell mags, Bulgarian 30-round plastic mags, 20-round Tapco plastic mags and 5-round KVAR magazines. All fit the rifle properly and functioned flawlessly.

For accuracy I mounted a Belarusian POSP 4x fixed magnification scope to the N-PAP and utilized a 5 round magazine. Here are the results: The N-PAP grouped all ammo types basically the same – I wish had more ammo types to check out, especially some American-made brands. Still, the gun was unstoppably reliable.

As far as disassembly goes the N-PAP, like all AK rifles is very straightforward. First make sure the gun is unloaded, remove the magazine, push the safety lever down and pull the charging handle back to make sure it’s still empty. Then just pop off the dust cover, depress and lift the recoil spring, pull the bolt back and lift free. With a little practice you’ll be able to do it blind-folded in about 10 seconds.

Accuracy * * * 1/2
The N-PAP grouped basically minute of hand at 100 yards. That translates to 3-4 MOA, which is pretty standard for the AK platform. I did notice that the groups didn’t seem to grow too much as the barrel heated up, making it a solid choice for holding imperialist American invaders at bay or shooting hogs all day long.

Ergonomics * * * *
The N-PAP’s controls come stiff as Hugh Hefner with a mouthful of little blue pills. The inclusion of a rubberized buttpad and a finger-grooved pistol grip make this Kalashnikov derivative especially comfortable, though.

Fit & Finish * * * *
The N-PAP’s outer finish is excellent and mine lacks the dreaded mag-wobble and sight cant of previous Century imports. But there is that questionable chromed bolt….

Accessories * * * 1/2
The N-PAP uses 17mm LH threads, takes standard AK magazines and features an optic rail that fits standard AK scopes. This is where the N-PAP’s compatibility with other AK parts ends, though. Tapco enthusiasts need not apply – you’re stuck with a narrow selection of makers for any aftermarket parts you may be drooling over.

Value * * * 1/2
The N-PAP ain’t cheap – it will run you around $750-800. But the difference in quality between it and a WASR is fairly substantial. However, the N-PAP is getting dangerously close to the cost of a pre-panic Arsenal-converted Saiga. And while it’s a solid performer, value gun buyers may be less interested when they can pay a little more and get something with better resale value.

Overall * * * *
At the end of the day the N-PAP looks, shoots, and feels like an AK. If you’re itching for an Avtomat with all the “assault weapon” fever, you won’t be let down by this Serbian rifle so long as you keep a few things in mind – like parts compatibility and the limits of the platform. I’m nicking half a point each for cost and parts limitations. But based solely on performance, the N-PAP is a 5 star AK…with a matching price.