It seems like double-tubed shotguns are all the rage these days. Kel-Tec kicked off the craze in the U.S. with their KSG and the response from the public was so overwhelming that there were bound to be other players trying to muscle in on the market. One of those competitors is Turkish maker Utas Makine who have come out with their UTS-15 shotgun — a redesigned version of the Neostead NS2000. And while the shotgun looks like it’s right off the set of Aliens, is it something you’ll want to put in your safe or nuke from orbit? . . .

The first version of the gun was pretty much game over, man. In short, the original UTS-15 didn’t work. It would fire for two or three rounds and then the gun would have a malfunction. Either the shell failed to eject or it double fed. But it was impossible to get through more than five rounds without having to clear a stoppage. Some might blame this on the shooter, but when we tested the original UTS-15 shotgun, four experienced people tried it and it failed for all of them. And as for the proficiency of the shooters, they were Kevin Brittingham (founder of Advanced Armament), Reed “Trey” Knight, III (of the Knight’s Armament dynasty), Johnny (weapons instructor for special operations teams) and me. So we’re pretty sure it was the gun and not us.

This shotgun has been on the market for a couple years, but the guys at Utas weren’t happy with the Gen 1 version. In fact, when I asked them to give me one to review they told me that they were in the process of revising the design and that they’d send me one as soon as that was done. Now, over a year later, that revision is complete. 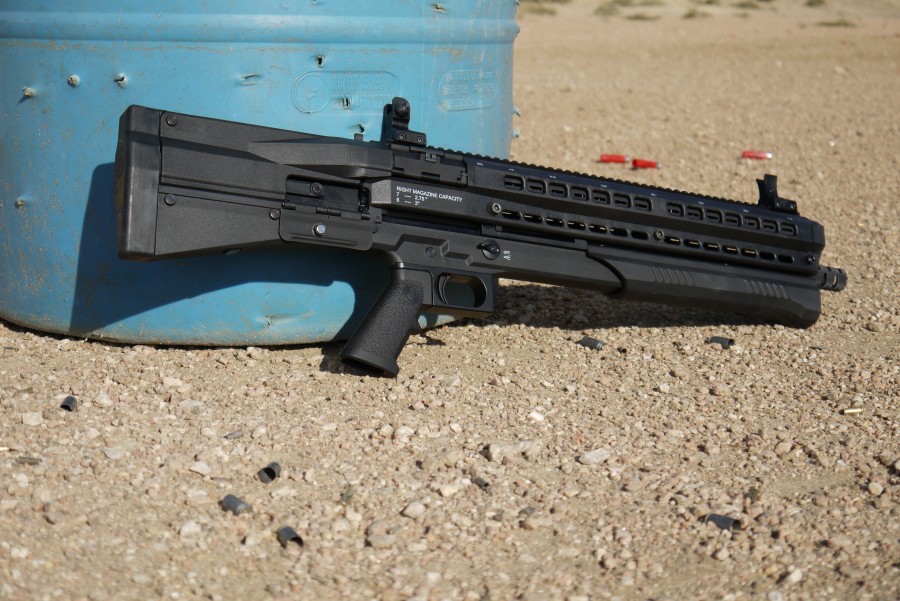 There are many things that Utas has improved in the newer rev of the UTS-15, but the primary visual difference is the addition of a light and laser combo in the bottom section of the shotgun (the tube that the pump rides along). Previous versions had the markings and requisite holes for the device, allowing it to be installed as a kit. Now, in the latest version, it comes pre-installed. A switch on the right side of the gun allows the shooter to activate either the flashlight or a laser — but not both at the same time. The light and laser work fine, though. 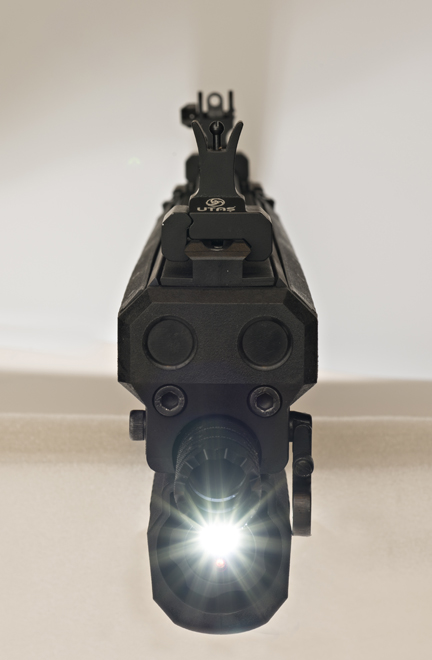 Looking over the rest of the gun, you can see that this is a very different design than the Kel-Tec KSG. While the KSG had the magazine tubes mounted below the barrel, the UTS-15 carries them above the barrel. This lowers the relative position of the barrel into a more AR-15-esque firing position, allowing the impulse from the recoil to come straight back into the shooter’s shoulder. That reduces muzzle rise, which is a neat trick.

That lower firing position (relative to the magazine) means that the lifter mechanism is reversed. It’s more like a smackdown ramp. Anyway, the mechanism works and the rounds find their way into the chamber somehow. In order to enable the mechanism to work in a bullpup configuration, practically the entire buttstock is used to house the operating mechanism. The top cover lifts off if you pull on it (no pins or screws required) and gives you access to the internal workings of the gun, much like an FS-2000, if you need to clear a jam. 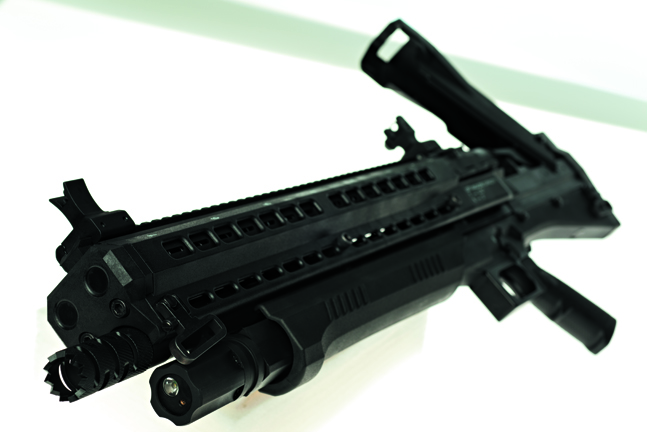 That stock design does have some drawbacks, namely that it doesn’t feel very comfortable. The length of pull is too short for me to use my usual shotgun grip and stance, which makes me feel a little like Lennie petting a rabbit when I hold it. This is probably a training issue and if I used it more often it would feel better. It’s just something that takes some getting used to.

In order to squeeze the gun into a tighter package, the ejection port for the shotgun is set behind the grip of the gun. This puts it in a rather uncomfortable spot for left handed folks, ejecting the spent hulls directly into the mouth of the shooter. No bueno. Another feature of the ejection port is an AR-15 style dust cover, which is held closed by a magnet. When the action cycles, the magnet disconnects and the the port opens. However, unlike with the AR-15 there is insufficient spring tension to keep the port firmly open while the gun is firing. As a result, the cover has a tendency to flap about as the rounds are flying downrange. Loading the shotgun is…interesting. There are two flaps on either side of the top of the shotgun that open to reveal the mag tubes. These covers are held in place by spring-loaded detents and require a bit of force to open. Then, to stock the mags you need to push the plunger assembly forward and then load each individual round into the tube one at a time. I tried to perform the usual “load two” shotgun loading method, but it didn’t work. The angle of the flap combined with the awkward angle of the port makes loading this thing quickly downright impossible. Speaking of impossible, topping off a partially filled magazine tube is a tall order with this thing. When the magazine is empty and you need to load it, it’s easy as pie. But when there are rounds already in the tubes and you’re in the firing position, it’s tough. When you close the latch, the last round in the magazine is released and pushed backwards until it hits the keeper that’s part of the magazine tube selector assembly, followed by the rest of the rounds in the mag. If you want to top off the magazine, you need to push these rounds back up into the magazine before adding the fresh shells.

Compared to the KSG, loading an empty UTS-15 is much easier. Where the KSG has a blind loading port, the UTS-15’s is very visible. It’s a solid improvement, but still awkward for those used to running a traditional shotgun. Loading up a partially filled tube, however, is much worse than with the KSG. One thing I liked a lot about the magazines on the UTS-15 is that you can select feeding from either the left or the right tube. There’s also a central position where you can feed from both simultaneously. That central position alternates between the left and right tubes, depleting the ammo evenly. It’s a definite improvement over the KSG’s operation where you needed to switch the selector lever if you want to switch magazine tubes.

Also on the list of things I liked is the slot running the length of the mag tube that lets you see how many shells are loaded. It’s a nifty feature, but like the cutaway magazines in the Chauchat (the hipster of magazines – they were windowed PMAGs before windowed PMAGs were cool) it probably lowers the reliability a bit in dusty environments.

A couple final thoughts about the design before we move on: the grip is a standard AR-15 grip, so you can replace it with whatever you want to make the shotgun more comfortable. Another convenience is that the shotgun is a dream to disassemble — you unscrew one piece and the gun splits in half. Re-assembly is similarly simple, since you aren’t wrestling a magazine follower into place. Speaking of switching things around, the shotgun features a barrel that’s threaded for chokes. this allows you to add whatever crazy muzzle device you want to the gun. The version I had shipped with a standard round cylinder choke, but also included a funky looking improved cylinder door breaching thing and this barrel extension. That could be helpful if you’re shooting trap, I suppose. Also included are a set of removable notch-and-post sights, but thanks to the full-length rail across the top of the gun you can mount whatever aiming device your little heart desires.

As for firing the gun, it works now. Mostly.

The new and improved UTS-15 shotgun ran perfectly with 2 3/4″ birdshot. Where previously I couldn’t get through more than a handful of rounds without a jam, the issue seems to have been fixed and I’m a happy shooter. But there’s still a problem.

While the shotgun runs fine with 2 3/4 inch shells, it’s supposed to run with everything up to 3″ magnum shells. However, it really doesn’t like slugs. Even slamming the pump forward with all my strength, every once in a while it would fail to lock on a slug. It took some extreme effort to get the breech closed, much more so than any other shotgun I’ve ever fired. Just because it doesn’t like to chamber slugs doesn’t mean that the gun doesn’t like shooting them. Quite the contrary, it’s actually pretty accurate as evidenced by this 25 yard slug target. The UTS-15 shotgun has had issues from day one, and it continues to have a few design flaws. But despite those hiccups, I definitely see a market for something like this. A “high capacity” shotgun would work great for home defense, something that you could load with 14 rounds and then not worry about ever reloading in a home invasion scenario. But if you ever did need to reload, you’d pretty much be screwed. And on the range, it would definitely be an eye-catching range toy that everyone would want to try out.

Ergonomics: * * *
High marks for using an AR-15 pistol grip in the design, but the short stock as well as the awkward loading process really hinder it. And the lack of ambidextrous controls in a modern firearm is slightly disappointing, considering that it wouldn’t take much effort to make that happen with the current layout.

Ergonomics Firing: * * *
Locking up the bolt is tricky with longer shells and there’s no feedback from the gun when it’s in battery. With an 870 I can feel when the bolt locks, but not with this gun.

Customization: * * *
It comes in multiple paint schemes and the full-length rail on top lets you mount any optic you want. But the lack of any real aftermarket keeps the rating in this category low.

Overall Rating: * *
For the price, it doesn’t make sense. It’s a cool range toy and an interesting design, but the early reliability issues that have only mostly been solved and the cheap feel of the gun have me concerned. And when it would cost just as much to buy two good semi-autos, a pump gun doesn’t seem like a good investment.