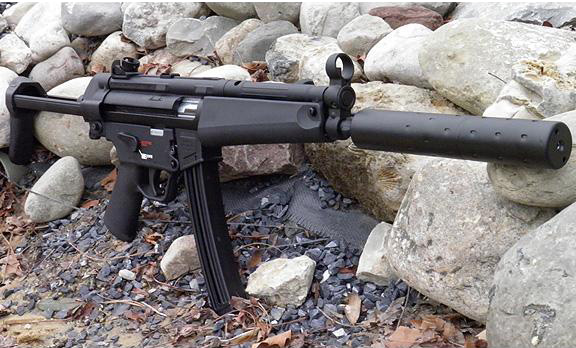 My life changed one fateful afternoon 15 years ago. The local cinema was playing older movies, discounted on Wednesdays. I bought a 32 oz can of Coke and sat down to an enormous box of Sour Patch kids. My buddies and I readied ourself for Navy Seals. I finished the movie with nary a sip of my beverage and all but three Sour Patch kids still in the box. Here’s what happened . . .

Charlie Sheen, while no John Wayne, made the MP5 SD in his hand appear to my young, impressionable eyes as a modern-day Excalibur. The black gun sickness struck me before I could even drive. An economic downward spiral, delving into H&K’s long guns, had begun.

I bought water-guns that looked like it. I sketched the MP5 SD in class, making it happen for crudely-drawn soldiers killing bad guys and saving the day. I was obsessed. For me, the MP5 was what the Winchester 1897 or the Colt SAA was to generations before me. 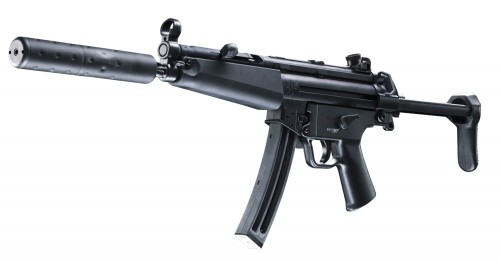 Years later, when I was legally and financially capable of purchasing a gun, I pursued my dream. When I saw the price of entry—about sixteen big ones—my jaw hit the floor so hard someone in Tokyo had to replant his Zen garden. I knew German precision engineering was expensive, but not Harley Road King expensive. The H&K MP5 SD was so far out of my range in college I might as well have been lusting over an M1 Abrams. After much research I began to understand the complexities of owning restricted firearms in the US and of the diminishing market for fully automatic firearms. From this I discovered that what I really wanted (or rather, could afford) was an HK94 carbine. Unable to find one locally, I hit online auction sites and discovered, as I’m sure many of you have, that H&K no longer makes the HK94 and if you want one you’ll to pay a huge premium.

My next thought: maybe it’s like the AR15 and there are several quality vendors other than H&K. There aren’t. Every forum I visited said to expect to need work done on any clone of the MP5 – no matter how much you pay – to get it to run 100% out of the box. (The exception being the reports I read of the MKE guns, but they aren’t imported anymore and you need to install six parts to make the gun 922(r) compliant.)

Discouraged, I saw a glimmer of hope in the form of the GSG 522—until I held one. It felt less like an MP5 than its water gun stand-ins. Thankfully, H&K licensed the creation of an MP5 A5 in .22lr through Carl Walther of Germany and importation by Umarex USA. But I’d gotten my hopes up before and been let down so many times that I was apprehensive at best.

Beyond skeptical, I opened up MP5 A5’s box I’d picked up at the local fun store. A grin snuck past my lips and a look of approval replace my previously apprehensive scowl.

It looked and felt nearly identical to the MP5 A3 I had the pleasure of renting at a local range. While the Umarex was missing the happy switch, everything else was there. The only difference was the 16” barrel hidden underneath a faux suppressor, modeled after a real piece of equipment, a Knight’s Armament suppressor.

The semi-auto subgun’s weight and heft lent credence to the roll-marked claim of Maschinenpistole heritage.  If you spotted one of these at a local gun shop without its magazine you’d never guess it’s a rimfire blaster. You don’t expect reliability from an auto-loading rimfire gun, especially one with a detachable magazine. Umarex and H&K recommend that you clean the gun approximately every 500 rounds. That sounds reasonable. As a reviewer, it’s my job to determine a firearm’s failing points. So I ran the Umarex MP5 A5 .22 with standard pressure ammo while dirty.

First, I fed the MP5 A5 CCI standard velocity rounds. After 450 rounds without so much as a hiccup, I reached deep into the bowels of my ammunition closet and pulled out a zip-locked bag holding around 300 rounds of old Remington thunderbolts. I added a few half-full boxes of CCI stingers and a box-fresh box of 555 Winchester hollow-points.

I blasted away with the supplied 25-round magazines like a man possessed. The trigger, while long, is not particularly heavy. As you’d expect, there’s less recoil than a hamster fart. Put it all together and we’re talking about a rifle that feels like a pellet gun on steroids.

Retracting the charging handle takes a bit of muscle. However, the amount of force necessary to open the bolt seems completely consistent, despite the buildup of carbon and wax in the action.

Add a red-dot or a low-magnification scope and the MP5 A5 would make a truly incredible plinker. Without it, not so much. The collapsible stock prohibits a solid and consistent cheek weld. Not that that’s unusual with wire-style stocks. I’ve seen guys wrap an AKS-47 in paracord to solve the issue—but then it can’t lock-up properly, which kind of defeats the purpose of a collapsible or folding stock. (Umarex offers a fixed, A2-like stock that should offer an improved cheek weld when using iron sights.) The rimfire MP5 disassembles like the real deal, only you don’t remove the bolt, or at least the manual tells you not to. To disassemble the gun for cleaning, you rotate the fire-selector switch to safe and remove the magazine from the mag-well. Open the action to ensure the gun’s unloaded, remove the push pin at the rear of the receiver and pop off the stock. Pop the second pin forward of the trigger guard, remove the grip assembly and Bob’s your uncle.

The simplicity of the MP5’s disassembly masks the persistent determination required for the cleaning process. The gun doesn’t readily break down into smaller pieces; you have to use plenty o’ Q-Tips and cans of bore solvent to git er’ done. Because of the way the gun’s bolt assembly is secured you have to clean the barrel from the muzzle end. Luckily, the fake suppressor acts as a cleaning-rod guide and muzzle guard.

The mag-fed Umarex MP5 A5 .22 goes bang when you pull the trigger, no matter what ammo you feed it. For that alone the rifle deserves kudos. The fact that it’s cheap to shoot and looks so damn cool, transporting SEAL wanna-be’s to action fantasyland, makes it an obscure object of desire. If Umarex’s MP5 clone was easier to clean it would be my go-to range toy. OK, actually, it is.

Accuracy: * * * * ½
The sight radius could be a bit longer but the match grade lothar barrel is plenty accurate for plinking and squirrel control.

Ergonomics: * * * * ½
I took half a star off because I felt the grip was too smooth for how front-heavy the gun is. H&K should have gone with (or offered as an option) the SEF lower that has both finger grooves and a thumb rest. That said, the gun includes both the magazine release button and the ambidextrous paddle release.

Reliability: * * * * *
In a word, perfect. The gun functioned 100 percent with both high capacity and low capacity magazines regardless of the quality (or lack thereof) of the ammunition I fed it.

Customize This: * * * *
There aren’t a ton of accessories made specifically for the .22 MP5, but I know that with minor fitting, several genuine H&K parts can be adapted for the gun. That being said, anything that has the H&K logo on it isn’t going to be cheap.

Overall Rating: * * * * ½
The gun feels serious and is fun as hell. I guess you’d have to call it serious fun.

Special thanks to Archie Woodberry of Blue Line Shooting Center in Florence, SC for acting as my FFL for the review. Check out his website, http://www.bluelineshootingcenter.com/