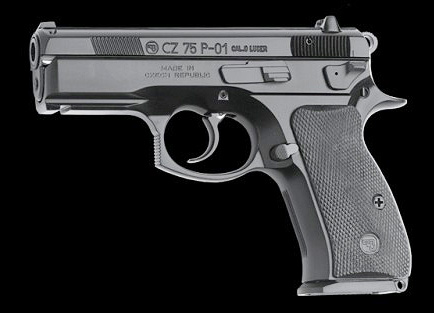 It’s summertime and the shooting is CZ. When it comes to this beauteous ballistic Czech mate, you’re in one of two camps. Either you own a CZ and love it or you haven’t shot it yet. I’m in the former camp; I own a CZ 75 P-01. Despite the obvious fanboy joke, my love isn’t blind. Where it counts there’s awesomeness. Elsewhere . . . let’s just say I’ve had to learn the art of compromise. But I’m getting ahead of myself. Pull up a cubicle and listen as I tell you a tale of beauty juxtaposed with horror . . . The first thing you’ll notice when [sic] you purchase a CZ handgun: the packaging. Happy birthday! The cardboard box wrapped around the black plastic hard case would be better suited to protecting a child’s cake than a handgun. The actual case is lined with generic egg-carton foam with enough room for the gun and two 14-round magazines.

You also get a bore brush (a nice touch), a combination Phillips-head screwdriver/punch (sounds delicious) for the grip screws, a takedown pin (more on that later) and an Allen wrench for adjusting and removing the sights. All useful stuff. There’s also a gun in there, too.

It’s a real looker. The CZ-75’s design is not for everyone, such as blind people, minimalists and anyone who thinks Scarlett Johansson is hard to look at. Like the architect’s daughter, the P-01 has a lot of . . . well . . . shapes. It’s voluptuous. The [gun’s] grip has a nice rounded contour which complements the arch above the trigger guard and stands in unique contrast to the business-like straight lines of the slide and light rail. 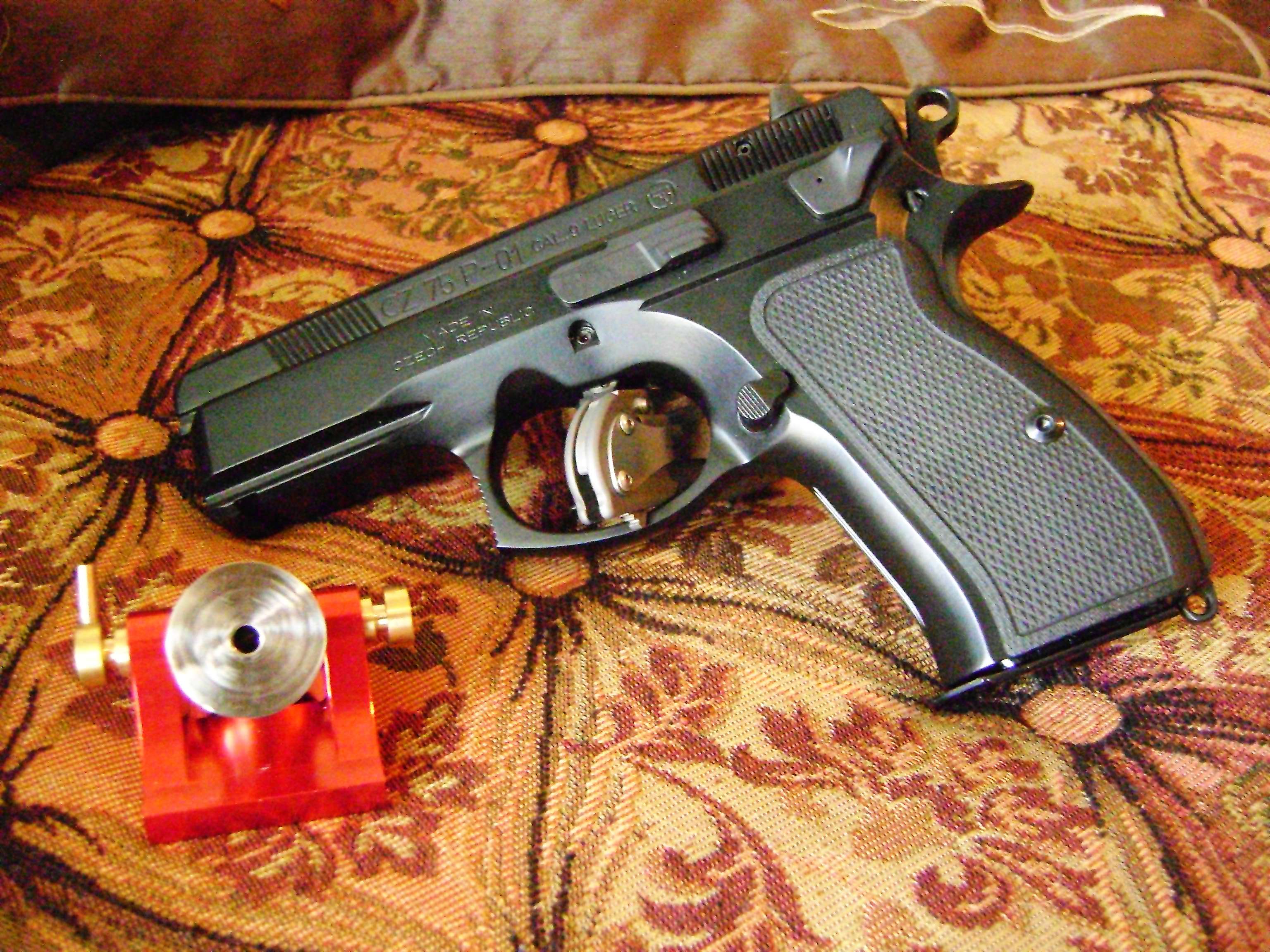 The back and front straps are serrated vertically to improve grip. A big part of this sexiness is the black polycoat that it wears like a fur coat. The finish is even and smooth and looks thick. It’s also very durable, as evidenced by the stray punch mark I didn’t leave on it.

If you really look closely at this particular CZ 75, you can’t help but notice that there are pins and springs and serrations everywhere. It’s really pretty cluttered on the outside, but somehow it works aesthetically in a “How did something so beautiful arise from the Cold War culture dungeon?” kind of way.

The P-01 is a refinement of the CZ 75D Compact. Česká zbrojovka Uherský Brod improved the metallurgy, added a rail and, through some rigorous but controversial testing, netted a NATO stocking number. Like the other members of the 75 family, the P-01 is double-action and single-action. Unlike some of its siblings, this one employs a frame-mounted de-cocker with no manual safety.

SIG lovers will no doubt be familiar with this system. They’re equally sure to be disappointed by the P-01’s trigger out of the box. SIG’s DA/SA system is the one to beat; the CZ just doesn’t feel nearly as refined. As it leaves the factory, the DA trigger is long, heavy and creepy with just a touch of grit. The decocker itself is positive and responsive, but far from smooth. And while the SA trigger is fairly light with a crisp break, it’s got creep like a Zerg colony.

After a lot of use and/or some careful polishing, the CZ 75’s go pedal will get there. Eventually. Maybe. Meanwhile, I really like shooting this gun. The trigger has smoothed and lightened quite a bit after an accumulated 1000 or so pulls (mixed DA and SA) between snap caps and live rounds. It has a strong and loud reset which, when utilized, eliminates a lot of the take-up on SA follow-up shots.

This is a gun that’s best shot in strings, riding the reset point and squeezing again just before you hit the firing pin block. Even the full double-action pull from the hammer’s half cock position, while long and stagey, breaks predictably and consistently. It’s not perfect, but I like it and it’s only gonna get better.

Oh, and did I mention this thing is a tack driver? Right out of the box—well, after stripping and oiling—the P-01 with its 3.8″ barrel delivered my best group ever at 7 yards: about an inch and a half. I was surprised to see that kind of result, as that 14 round mag was a combination of DA and SA shots from a self-taught shooter with below average eyesight and ugly form, but steady hands. Chalk it up to excellent ergonomics which give the P-01 a very natural point-of-aim. Definitely don’t chalk it up to the sights. They’re harder to see than an entire episode of Top Shot. Oh, it’s a three-dot alright, but the dots couldn’t be much smaller and they’re painted with green photo-luminescent paint that’s difficult to see in all conditions. It looks like Jackson Pollock painted my front sight in a fit of alcoholic rage.

I suppose this is a way for CZ to distinguish themselves from the pack, but I’d prefer real night sights with a generous white dots. In any case, I didn’t really need them; I found myself shooting very accurately without relying much on sight picture.

That brings me back ’round to the ergonomics thing. The CZ’s low-bore axis and checkered rubber grips, complete with a generous, confidence-inspiring palm-swell, make follow-up shots easy and fun. Rubber grips are great for the range. Buyers with a more defensive mindset may want handles that won’t snag on your cover garment. Don’t worry, there are plenty of options out there. 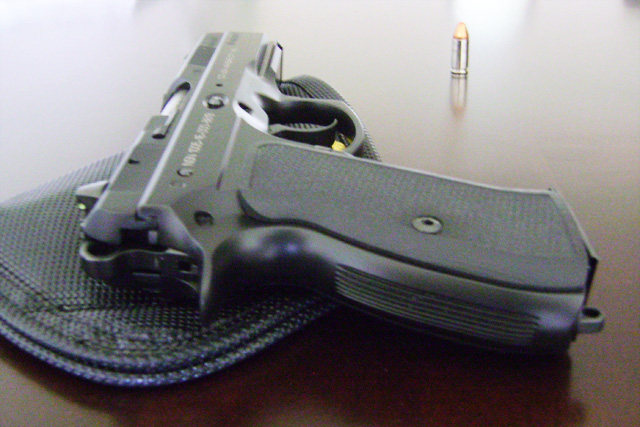 I picked up some VZ black G-10 grips, but I was torn between wood and the awesome looking Crimson Trace Lasergrips. If you go shopping for gifts for your P-01, keep the palm-swell in mind. Many aftermarket grips remove them to keep things nice and thin. A generous beaver-tail out back makes for a natural point to really choke up on the grip, getting you pretty close to the short and narrow slide without fear of slide bite.

Oh, and that slide? It locks up to the frame tighter than any pistol I’ve ever owned. There is zero perceptible play or rattle anywhere when in battery. The tolerances are tight, yes, but this is due mostly to the internal rails design common to CZs and the SIG P210. You feel like you’re holding a solid piece of metal rather than a bunch of parts thrown together. It’s like getting a custom, hand-fitted handgun out of the factory. Except it isn’t like that at all. Breaking down the P-01 requires lining up two lines on the slide and frame, then tapping the slide stop out from the other side. It’s not that hard to do (especially with the included punch), but there are better systems out there, of course. Once the two halves are separated, take a look inside and see this: 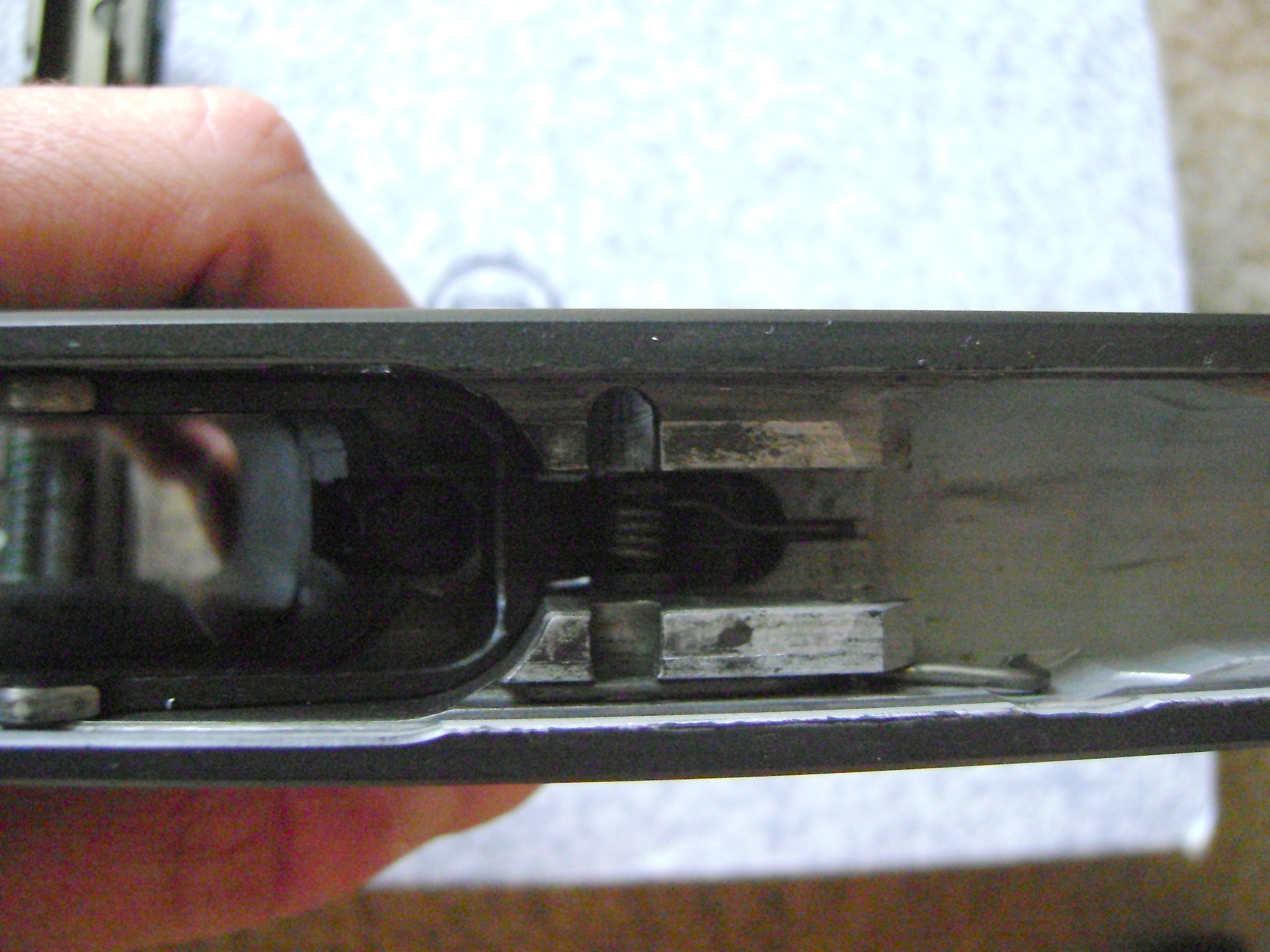 Pretty bad, right? This is how you make a perfectly reliable, exceptionally accurate, magnificently ergonomic handgun and sell it for between five and six hundred dollars. The finish on the underside of the slide is inconsistent and it’s clear that no attempt was made to deburr anything or smooth out any tooling marks.

Did I say tooling marks? It looks like they used a Dremel to mill this thing. The good news is that none of this seems to affect performance or reliability in any way. Finishing bearing surfaces is kind of stupid anyway, as once it wears you’re left with a looser fit than before. I would definitely like to see fewer sharp edges inside however, as they make cleaning much more difficult and dangerous. The same holds true for the frame. As an aluminum alloy part, there’s no chance of corrosion, but CZ didn’t even bother to finish the guts. It looks like a fifth grader got a hold of mine. Surprisingly, these problems rarely get mentioned outside of forums and never in reviews. I suppose most people love their CZs so much that they forget about the deficiencies–and that is love–but almost everyone mentions the roughness of the trigger. The truth: they’re the same problem. CZ’s milling process is, um, rough. All of the parts involved in each trigger pull are machined with the same amount of care as the razorblade slide, and what you feel is their grinding hatred for each other as they’re forced into proximity. That said, against all odds, the feeding ramp is beautifully polished. Many people have extensive work done to their CZs internally to clean them up; others just shoot them a lot until they get there. It’s hard to say which method is utimately more expensive, but the end result is about the same: a near-as-damnit perfect handgun. It may not be presentation-grade, but in function there is no equal. If you don’t mind a little roughness around the edges (maybe you, like me, enjoy the work) and can look past the P-01’s flaws, then you will find a truly world-class shooter; and you are a romantic.

Accuracy: * * * * ½
It’s as accurate technically as any pistol I’ve ever shot. Excellent ergonomics give it an edge over the competition.

Ergonomics (firing): * * * * *
As good as they come. Clearly designed around the geometry of the human hand without any concessions to robots.

Ergonomics (carry): * * * *
While its light enough for just about anybody and the organic shape breaks up the print, the rubber grips and magazine floorplates have got to go. They stick to clothes like price tags. As with any compact of this size, the right holster and belt make it disappear.

Reliability: * * * * *
Perfect. This gun shows its hard-working Eastern European roots and gets it done, no matter what it eats.

Customize This: * * * * *
The P-01 has a lot of brothers that accept similar gear, and the P-01 is a popular handgun worldwide despite its rather lukewarm reception stateside. There are enough options to keep you obsessed for a while. Swapping out a mainspring for a slightly lighter one, for example, eases the DA pull down a few non-negligent pounds.

Overall Rating: * * * * *
Concerns with invisible cosmetic problems and craftsmanship quickly become distant memories when a handgun fills your hand so perfectly that you just don’t want to put it down. Give it some time and a little elbow grease and you’ll have a near perfect self-defense weapon, as well as a thrilling range toy. If there weren’t some problems with this thing, I doubt I would be interested enough to write a review, much less love it as much as I do. All in all, it’s a keeper and a tremendous value.