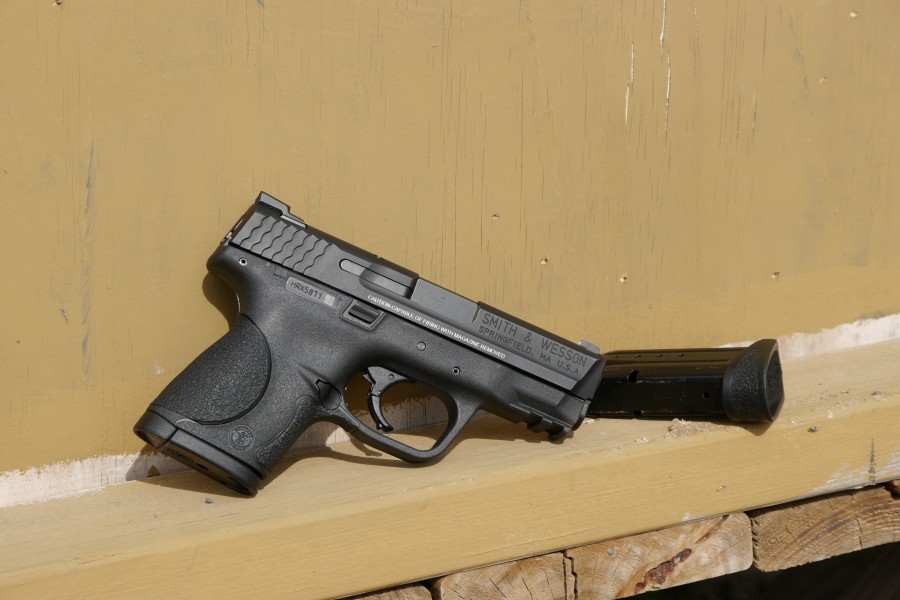 Smith & Wesson was late to the Tupperware pistol party, but welcome. When Smith finally introduced the M&P line as their answer to the GLOCK juggernaut, the M&Ps sold like hotcakes. Police departments, competition shooters and the mass market bought the guns for their comfortable grip, eye-pleasing lines and American provenance. The compact version the 9mm M&P was a hit on the concealed carry market as well. With the introduction of the S&W Shield – a slimmer, more fashionable single-stack compact 9 – does the M&P 9c still rate? . . .

I can imagine how the conversation went when the engineers designed the M&P 9c: “Why don’t we just chop it down and sell it as-is?” Why not indeed! Everything about the 9c – from the size of the trigger guard to the width of the slide – is an identical copy of the original M&P 9. They even take the same magazines. The only difference between the two firearms: the 9c sports a shorter barrel and grip. It’s still an ergonomic delight and a damn handsome gun. The S&W M&P 9c comes with two magazines: a flush fit mag and one with an extension for your little finger. While the “extended” magazine might seem bigger, it doesn’t hold any more rounds than the little one. With the extended magazine I couldn’t feel any difference between the 9c and a full-size M&P9. The flush-fit magazine left my little guy dangling off the bottom of the gun in a rather uncomfortable manner. I have massive mitts. YMMV.

Shooters looking for a smaller package than the standard-issue plastic fantastic GLOCK 19 will be pleasantly surprised; the Smith & Wesson 9c is just a hair shorter than a 19. But the 9c is still a double stacked design. The current trend in concealed carry handguns is the single stacked 9mm design. In today’s world, it’s considered a fattie. An unpleasant effect of chopping down the barrel: felt recoil. There’s actually less net energy being transmitted to the firearm (more powder burning outside the barrel and so forth) than you feel in the 9c’s full-size fraternal firearm. Since there’s also less mass in the gun, you feel more of that energy in your hand. It gets a bit annoying, but the large diameter of the grip combined with the extended magazine keep it relatively easy to control. You know; for such a small gun.

Out on the range, that extra heft is definitely appreciated, in terms of keeping the muzzle down between shots. Even so, when you start trying to hit where you aim, the 9c’s trigger trigger trouble comes into play. 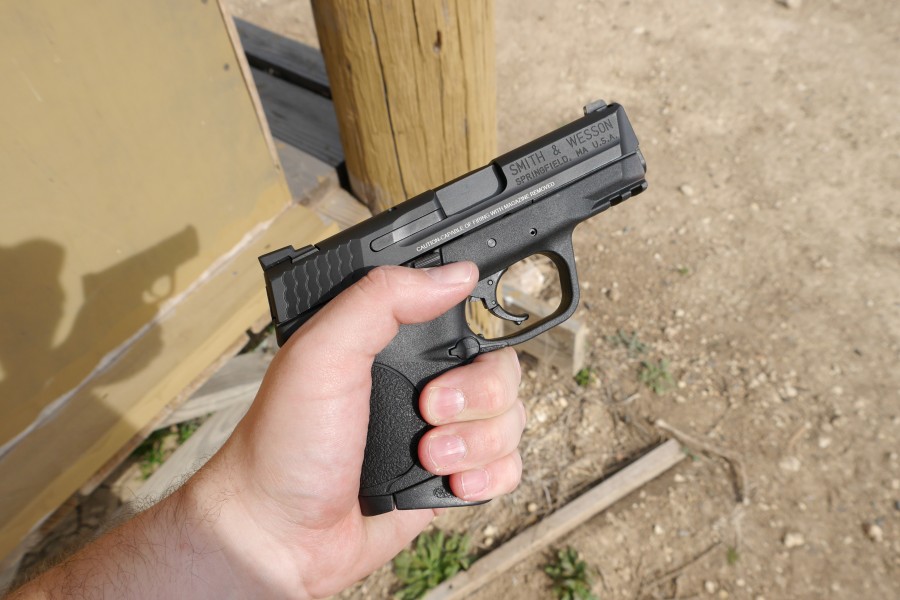 Unlike the GLOCK’s safety-action trigger, the 9c’s trigger is flat. The American’s go-pedal feels more natural under your finger than the Austrian’s. And that’s the only thing good I can say about it. The Smith’s trigger feels shoddily-made. The pull is heavier than Proust. In fact, the 9c’s trigger is so bad the gun’s really only usable once you’ve installed an Apex trigger kit or one of the other after-market units. Otherwise it’s damn near impossible to keep rounds on target. 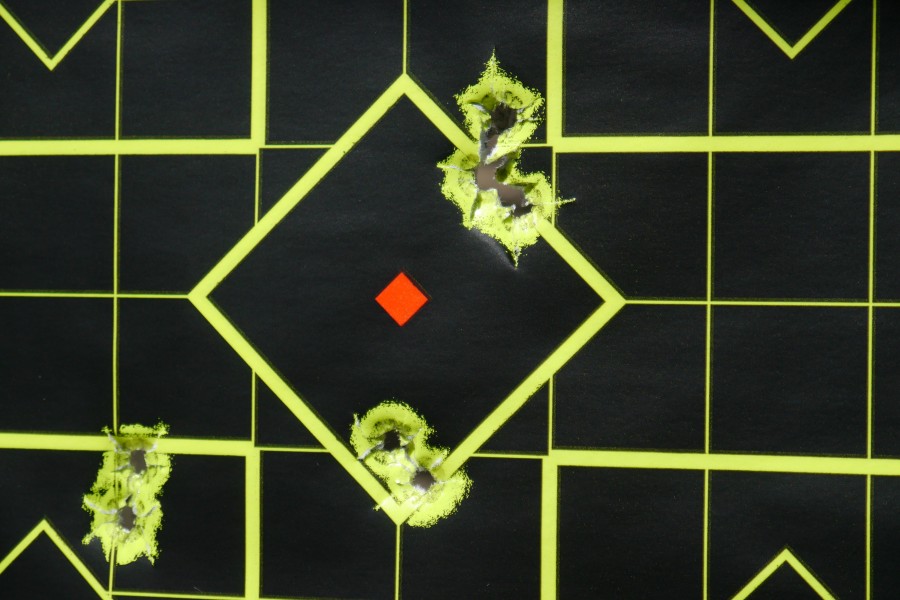 At best, the 9c is a “minute of bad guy” pistol. As someone who regularly shoots a wide variety of handguns in competition, I was completely incapable of hitting the X-ring with this gun. My shots were in the same general vicinity. At contact distance the gun will be effective, but that trigger prevents you from accessing the firearm’s inherent accuracy. 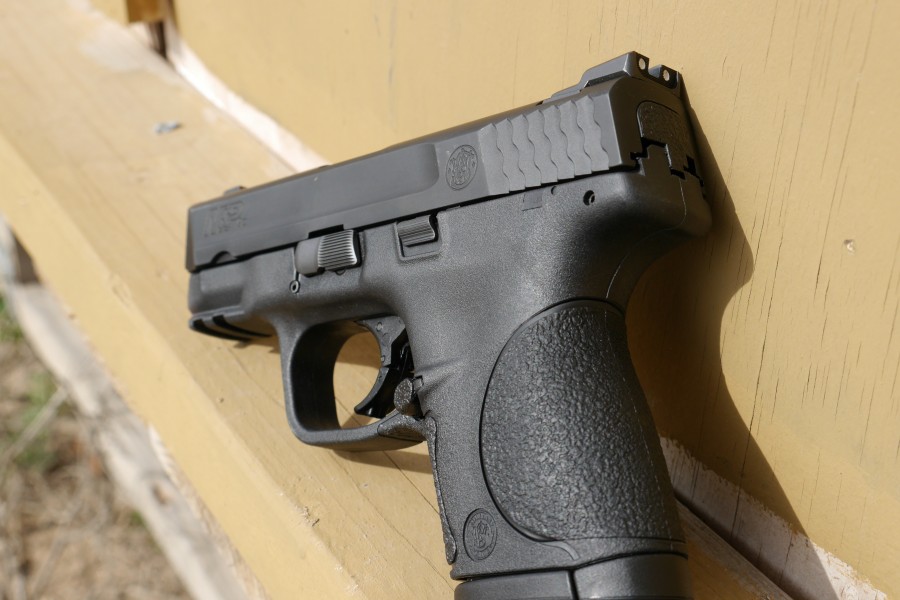 The only edge the 9c has over the Shield: there’s no manual safety (unless you order a 9c with a manual safety). It’s a small victory. Shooters can (and do) simply leave the Shield’s safety off and never bother with it. Not a tactically sound state of affairs, but it is what it is.

The 9c was a popular pistol when it was introduced. Since the Shield entered the market there isn’t really a good reason to choose the 9c over its smaller, lighter, more accurate little brother. While the 9c is fatter, all that bulk only delivers about four more rounds of capacity (depending on model and magazine size). The 9c might make sense if you already own a full-size M&P 9 and like your compact’s ergonomics to mirror your full-size firearm. Otherwise there’s no benefit to the Smith & Wesson M&P9c over the Shield. Unless you like throwing $100 bills down the drain.

Ergonomics (carry) * * *
Having carried a full-sized double-stack 9mm handgun, I don’t recommend it outside of the depths of winter when heavy coats are the norm. There are plenty of people who carry a GLOCK 19 though so the lowest I can go is “average” on this one.

Ergonomics (firing) * * *
The heavy trigger cost this pistol one star and the wild inaccuracy cost it another. It’s entirely possible that an individual properly trained on this specific firearm could get it to group better, but ain’t nobody got time for that.

Customize This * * * *
There’s an accessory rail, after market triggers, holsters, magazines, the works. But most of the accessories are designed for the full-size M&P 9 and while they’ll fit, won’t work as well on the smaller version of the gun.

Overall * * *
The S&W M&P Shield is $100 cheaper, slimmer, and comes with a better trigger from the factory. The 9c’s “extra” rounds are a bonus, but they’re not worth the price and the size. In my opinion, at least.