Last year I decided I wasn’t interested in reviewing any more STI guns. The reviews had all started to sound the same: reliable to the point of boredom, accurate, good looking, great controls, fast, expensive, blah, blah, blah. Then, around Christmas time . . .

I got a sneak peek at their new DVC line, including the DVC Carry 9mm. It should have been called the Jon Wayne Taylor Carry. It was exactly the gun I’d been asking for since my review of the Tactical DS 4.0.

I wanted to take it home with me right then Alas, the DVC Carry had to go to SHOT Show for Media Day. Two months later, I finally had one back in my hands. Like the DVC 3-Gun, this one is a looker right out of the box. It has the same general appearance: full depth cut-outs in the slide near the muzzle, covered in STI’s black Diamond Like Coating.

Like the race gun, the Tactical and Carry versions sport a Titanium Nitride coating. The race gun’s barrel has golden hue, whereas the DVC Carry’s is a dark bronze.

The resulting color scheme is deeply appealing. More importantly, the coatings reduce friction and protect the gun. There are very few coatings harder than DLC and TiAIN. In theory, that should make the DVC Carry extremely durable and reliable. I certainly put that to the test. I suspect this is the same DVC Carry STI used at Media Day; it’s had a lot of rounds through it. It arrived absolutely filthy, at least on the inside. That’s a real roll of the dice to take for any manufacturer. Anyone who reads this site knows I put at least 500 rounds through a T&E gun, with no cleaning before, during or after.

I put well over a thousand rounds through this pistol. I shot both FMJs and HPs through it, and standard 115gr, 124gr+P, and 147gr subsonic loads. Many people have shot it. Zero issues whatsoever.I’ve yet to experience a malfunction of any kind. Considering that performance, I’d trust my life to this gun. The DV Carry feels great in the hand. And really, that’s the gun’s biggest selling point. In my review of the Tactical DS, I noted that I thought the double stack pistols had a larger grip. They do– by 1/4″ in diameter. The double-stack DVC Carry feels almost exactly the same in circumference as my single stack. In fact, the DVC Carry feels the same, only better. The DVC line all have the same stippling on the handles, exactly like the one done by Extreme Shooters of Arizona for the DVC 3-Gun version. It may look like a cheese grater but it’s anything but. The material is soft enough to give just a bit, gripping back on my fingers.

I shot the DVC Carry in the summer and the (not so) cold of the Texas winter. When my hands were dripping with sweat, it held tight. When I was wearing gloves, same again. That’s nice in a competition gun, but absolutely vital in carry gun.

What are the odds your hands will already be bloody when you draw your gun? What are the odds that something else, like your shirt or your jacket will get it the way of a perfect draw, and you end up with some material in your hands? The DVC Carry provided an ideal grip surface. The handle’s also the perfect size — for me. Children and smaller-handed men and women will find the DVC-Carry grip a little too big. If you’re on the tiny side, stay with the single stack. The gun conceals just like any commander-sized 1911. That is to say, extremely well.

I packed the DVC Carry in the same El Paso Saddelry Summer Cruiser IWB holster as I do my STI single stack. Under just a T-shirt, you’ll really have to look for it to know it’s there. And then only if I’m leaning over or otherwise stretching the shirt tight. Under even a light jacket or overshirt, it conceals completely.

The notion of a true double stack pistol with 15+ rounds and a full grip that feels great in the hand and conceals even better is my dream come true. At 26 oz. empty, this 15-round gun weighs less than a single stack Colt commander in an aluminum frame, much closer to the polymer GLOCK 19. The DVC Carry wears my favorite carry sights: Heine Straight 8 night sights. I have the luxury of having my own range, so I get to shoot quite a bit at night. Tritium sights make a difference, and Heine’s dot-on-top-of-a-dot setup is the fastest sight acquisition system I’ve found to fate.

Also appreciated on a carry gun, the STI pistol’s rugged sights have a built-in hook on the front of the rear sight; the owner can use it to rack on clothing, a belt, a shoe, etc. You’ll also notice that the sights are mounted into the slide to allow the absolute maximum amount of distance between them. With a short (in length) front sight pushed to a couple of millimeters distance from the muzzle, with the rear sight flush with the frame, the DVC Carry gives you all the sight radius you can get on a shorter barreled pistol. The DVC Carry has the same ambidextrous thumb safety found on the other models.

I used to be against this, thinking that an ambi safety would get caught on my clothes when I carried IWB. I’ve tried to create the problem with several different guns. It just hasn’t happened. I think the likelihood of having to draw and take the safety off with your left hand is so small as to approach zero, but I still like a left side safety.

I’ve found that it’s much easier to grab the gun off a smooth surface, like a desk or a floor, and get a fast grip on it, if the safety raises the handle slightly up, off the surface. I didn’t think it made much of a difference — until I tried to do it quickly. Now I’m convinced. It’s ambi safeties on my 1911s from here on out.

The DVC Carry’s safety is well serrated, giving my thumb plenty of real estate, while narrow enough to not dig into me anywhere during carry. It clicks on and off quickly and easily, with a solid feel to it.

Absolutely nothing on this gun catches on my holster, my clothes or my hands. It’s fast drawing fun, delivering hours and hours of easy shooting.

With just a tiny amount of pre-travel, the DVC Carry’s trigger breaks clean and easy. It feels just a bit heavier than the 2.5lb DVC-3Gun, closer to 3lbs. I keep a 2.5lb on my EDC, but few like a trigger that light on their carry gun. The trigger reset is very short and obvious. 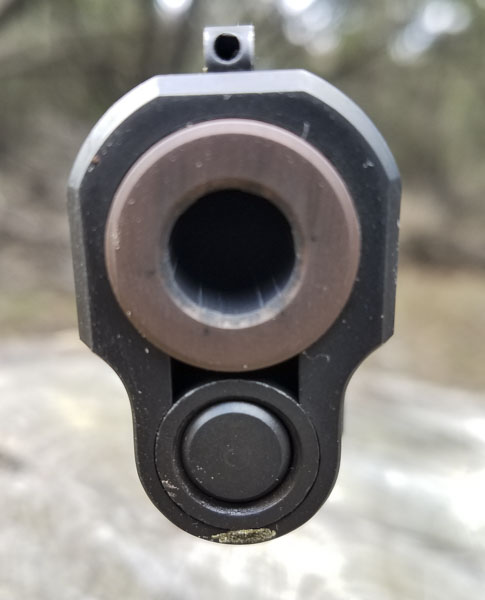 The 3.9″ barrel is a bushing-less bull barrel. I have to at least partially credit this with the lack of recoil in an otherwise lightweight gun. The DVC-Carry also comes with the Recoil Master guide rod system, requiring no tools to disassemble.

Combine the heavy barrel, the 2011’s ergonomics, the great grip surface and the Recoil Master in one package, and the result is a highly controllable rocket ship fast 9mm.

With most guns, I consistently score .16 to .17 on my split times. It was the same on this gun as well. With the DVC Carry, I didn’t achieve this splits for just two shots, I was doing it for five shots, and at farther distances.

If I’d done all of my firing at 15 yards, I would’ve said this gun is just as easy to control as a GLOCK 19. But the reality is I can make the same group size in fast fire at 25 yards with the DVC Carry as I can my GLOCK 19 at 15. After well over 500 rounds of shooting an already filthy pistol, and a couple of days of down time, I sat down at the bench for accuracy testing.

Like the DVC-3 Gun, performance differed a bit based on round choice. A solid performer for a defensive bullet, the Winchester 124gr+P scored a 1.7″ five round group for 50 rounds of shooting at 25 yards. That’s not the best group, that’s the average, and that’s not bad. 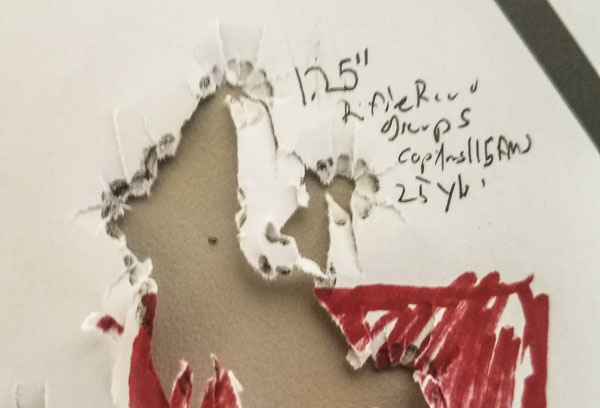 The Cap Arms 115gr FMJ gave me an average of 1.25″ for another 50 rounds. The American Eagle 147gr FMJ bullet didn’t perform as well, printing 2.1″ groups, but to be fair this has been a poor performer in every gun I’ve shot them through and I don’t intent to use them again.

I’ve had the gun for a while now; a number of people shot it. Three have ordered the gun after that experience. The one who didn’t ordered the larger DVC Tactical version.

The DVC Carry looks great and shoots incredibly well. It certainly put me a level up, especially with single-hand firing and fast fire at distance. Yes, the price tag is high, but this is a pistol I’ll sell other guns I really like to pay for. I’m glad I broke my embargo for the STI DVC Carry.

Style and Customization * * * * *
On the customization size, like all STI 2011, there’s so much you can change, but don’t. The grips are perfect, the sights are ideal, and the gun looks good too. I still favor more traditional appearances, but the cut outs, and the contrasts in color of materials have been done with a great mind to both aesthetics and function, and it has all been executed well.

Accuracy * * * *
Like the STI Tactical DS, I think this should be broken into two categories. On strictly bench shooting, 1.25″ is good, especially on a gun with a less than four-inch barrel. Good, but not amazing. In fast fire, the ability to land multiple rounds inside an eight-inch circle at 25 yards with .17 split times for as many as five rounds in a row is absolutely exceptional, at least at my skill level.

Overall * * * * 1/2
An absolutely stellar performer for its intended purpose. Half a star off on the overall score for not breaking the one-inch mark in accuracy testing. This is the standard by which I will judge all EDC carry guns going forward. It will very likely replace my current STI for daily carry. I can’t think of any higher praise.