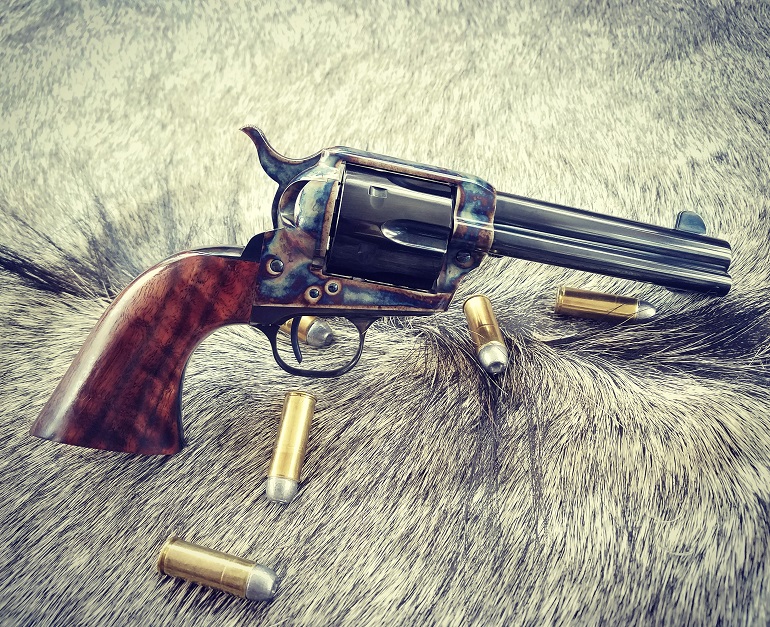 I have every generation of the Single Action Army revolver from Colt. They’re great guns, and I enjoy shooting all of them.

None of them are of the quality of this Single Action Revolver from Standard Manufacturing.

And yet, compared to all of them, the originals and all the clones alike, the Standard Manufacturing Single Action revolver is a big, big level up.

This is an American made gun with zero cast or metal injection molded parts. It is difficult to overstate how rare that is in modern manufacturing.

The gunsmiths at Standard have machined this entire gun from 4140 tool steel. Almost every single part and the manufacturing process of the Single Action Revolver is done in-house at their 3 acre plant in New Britain, Connecticut.

Standard Manufacturing is its own company with its own employees, but Connecticut Shotgun manufactures parts for them, and some of the same gunsmiths who have been lauded for the work with Fox, Parker, and Model 21 double shotguns are working for Standard on these guns.

That experience and attention to detail shows, most obviously with the finishes.

I have quite a few color case hardened guns. The quality of the bone and charcoal case hardening on this gun is better than any of them. It’s as good as any on the market today, at any price point. There are swirls of browns and blues and green hues. The steel frame is smooth and polished, and yet somehow it’s impossible to not see the depth in it.

Take a look at the fire blued screws. They are all timed along the horizontal barrel line of the gun. That means all of them, including those on the underside of the Standard Single Action. This is not an add-on or an upcharge custom item, it’s standard. That’s the attention to detail every fine firearm should include.

The same treatment has been applied to the ejector head, the base pin, and the cylinder base pin. The glacial ice color of these parts both set them apart from, and at the same time accent the frame itself.

The quality extends beyond the metal. Although the original Colt Cavalry SAA’s included walnut stocks, I have not yet seen any of those stocks as fine as the walnut stocks from Standard.

The Standard’s grip is well polished, oiled, and features figured walnut with beautiful dark stripes in the wood. I’m again surprised that this is their basic walnut and not a custom upcharge. Even higher grades of wood are available.

The grip shape itself on the Standard Single Action is nothing new. It’s just like the old Model P, and even that was a holdover from the 1851 Revolving Belt Pistol of Navy Caliber. Like the great white shark, that grip is so naturally perfect it never had to evolve.

Just like those ancient belt and saddle guns, the Standard Manufacturing Single Action looks like it would be too small for the hand, especially for someone who wears size large gloves. It looks like that, but it doesn’t feel like that.

The Standard’s grip fits perfectly in the hand, especially for single-handed shooting. It gives exceptional control of the firearm, and there is no other design that improves on its ability to manage heavy recoil, save the Bisley grip, which is just a slightly modified version of the original.

There are no significant mechanical changes from the original Colt Single Action Army. I can’t say “no changes at all” because there have been quite a few minor adjustments throughout the years with Colt’s SAA. In some ways, the Standard Single Action is more like the first generation Colt SAA than the last generation of the Colt SAA.

The Standard Manufacturing Single Action has no transfer bar. (Load one, skip one, load 4.) Many of the parts are interchangeable with the original Colts. I asked what the changes from the original design were and it didn’t go past thread pitches and some part diameters and radiuses.

Standard’s CEO claims “Our Single Action Revolver is true to form, which is to say the man who designed this gun originally would immediately recognize it as his own, as would the legends of the Wild West.” That is absolutely true, although he probably should say “men” and not the singular form, as Colt himself had been dead for seven years before Mason and Richards designed the Single Action Army.

I shoot a lot, a bit more than 30,000 round a year. That’s not enough, and Lord knows my performance isn’t reflective of my rounds down range, but it’s a lot. Frankly, it gets old.

Shooting the Standard Single Action doesn’t get old. The hammer cocks smooth with the traditional four clicks. It falls with surety after 2 1/2 pounds of pressure on the trigger.

As it should be, there’s zero creep or mushiness to the trigger. It breaks cleanly. The Standard Single Action is perfectly capable of shooting in any competition as-is, but it has not been set up for a short hammer throw, a hair trigger or any other “race ready” modifications.

The rear sight is the traditional channel with a fixed blade front post. It’s durable and functional, although the black sight will get lost on a dark target.

I took my time with a slow draw and a solid single hand aim. Even with this smaller 4 3/4″ barreled version chambered in .45 Colt, there’s no SAAMI spec round that feels punishing, or, as long as I did my part, failed to hit its mark.

I tried my hand at the quick draw and was rewarded with a laugh at how my hands are anything but quick. But I was laughing. These guns are a good time.

Reasonable precision at the 25 yard line is pretty easy with the short Single Action. Off a front bag, the ubiquitous Winchester Cowboy Action load printed 3 1/8″ five-round groups averaged over 20 rounds.

That round is easy to shoot, practically falling out of the barrel at just over 700fps. It’s also filthy dirty. Save black powder, is there any ammunition out there that leaves a gun dirtier than Winchester’s Cowboy Action round? What do they put in those cases?

Upping the ante quite a bit, I loaded a well-lubed 255gr Keith-style bullet up to max pressure. The results of that round, moving just a hair over 900fps on average was a tighter group, at 2 3/4″ five-round groups as an average over 20 rounds.

At 50 yards that round will reliably land in a 7″ circle and will still have more energy at that distance than a standard 230gr .45ACP does at the muzzle.

Although I intend to, I haven’t spent any time developing a particular load for this gun. Sub 3-inch groups at 25 yards with a heavy load is good, but given the quality of the revolver, I’m betting it’s capable of even more precision. Those rounds shoot just as well out of this shorter barreled (and shorter sight radius) gun as do any of my longer Colts and Ubertis.

It should be noted that Standard shipped a target that was serial matched to the gun. That target shows a 5-shot group measuring just under 1 inch at 15 yards. Unfortunately, none of the characteristics of that group were included, such as how the revolver was fired or the ammunition used.

I shot a little over 300 rounds out of this gun for this review. The first 200 were Winchester’s Cowboy Action rounds. I shot those the first weekend I had with the gun. I had fun cross drawing, practicing shooting from the hip, and shooting as fast as my right hand and left thumb would allow.

The next 100 were some rounds I use in one of my Colt SAA’s for pig and javelina hunting. Those are, according to the 49h edition of the Lyman reloading manual, max pressure rounds for the 255gr #452424 Lyman bullet.

I didn’t clean the gun at all until all until the shooting was over and I was ready for some more pictures. At no point did the gun fail to cycle. I never had any kind of hang fire. I also never had any trouble ejecting a round, and the ejector rod never hung or stuck.

Since I cleaned it, I had some guests over and we shot it a bunch more with perfect reliability. In short, there were zero issues of any kind with the reliability of Standard’s revolver.

I’m betting most folks purchasing this revolver will use it only as a “range toy.” That’s a real shame. Take it hunting.

I have used that particular 900fps Keith load I mentioned many times on wild pigs, javelina, and a few deer. I’m usually rewarded with a complete pass through up to about 35 yards on the pigs. On our little Hill Country white tail deer there’s no doubt I’d see that same performance out to 50 yards.

The Standard Manufacturing Single Action revolver sets an extremely high bar for the traditional western revolver. It’s difficult for me to write a review without any digs on the gun at all, but there just aren’t any here. Even as a huge Colt fan, I just don’t see myself ever buying another new Colt as long as Standard is making these guns. Next to Standard Manufacturing’s revolver, Colt’s Single Actions are, comparatively, sub-standard.

The Standard revolvers simply outshine, outperform, and outclass the other traditional single action revolvers on the market.

Congratulation to Standard on making an exceptional firearm, bucking the “race to the bottom” trend and showing off what skilled American craftsmen are still capable of.

Customization * * * * *
A few different calibers, multiple grip options, barrel lengths, and engraving. If, for some stupid reason, you want to put some Colt parts in instead, you can. Don’t.

Reliability * * * * *
This gun is even better made than the original, which was chosen over the Schoefield break top revolver, partly because it made a real good club and kept on ticking.

Accuracy * * * *
Just as good as any of my other SAAs or clones with longer barrels and sight radiuses.