For years I had been searching the perfect lever gun: short, charming, and capable of delivering at least 4000 ft/lbs of energy at 50 yards for my weekly brown bear encounter. I was considering finding one of the old pre-Remington Marlins in .45-70. What a great cartridge…nearly 150 years old and it’s still found as a modern chambering. But, that wasn’t quite big enough and lacked some of the energy I was looking for. A friend of mine, who lived in Alaska for years, suggested I look at the 50 B&M Alaskan. Let’s just say it filled all of the requirements I had set forth . . .

The 50 Alaskan was developed by Harold Johnson in the 1950s for Alaskan guides. He took the classic .348 Winchester, blew out the case, and shoved a .510 bullet in the end. What a brilliant idea.

It allowed the use of the existing action size that most of the hunters had, plus delivered a considerable increase in energy. However, in today’s market, .510 diameter bullets aren’t easy to come by. However, there have been a plethora of bullets developed for the requirements of .500 shooters. In the 2000s, B&M necked this case down a bit more to accept .500 bullets – which opened the flood gates in regards to bullet choices and availability. During the middle of 2014, I contacted J.D. Jones of SSK Industries to have him build a rifle for me. Handgun hunters might recognize J.D.’s name as his development of cartridges such as the 375 JDJ has led to a lot of happy hunters. I outlined my requirements of the gun and the guys at SSK gave me feedback to build just the rifle I was looking for.

We decided to start with a Marlin 1895, have the action worked, barrel the rifle in 50 B&M Alaskan, mount a forward scope rail, install some ghost ring sights, and send the rifle off for finishing. I received the rifle in January 2015 and was thrilled to open the box and take it out to the range. The only problem was ammunition. Buffalo Bore currently loads .50 Alaskan, but that’s with the original .510 diameter bullets. SSK supplied me with enough formed 348 brass to get me started. But let’s be honest, I wanted to start developing loads straight away, and that’s hard to do with only a handful of brass.

Luckily for me, Star-Line is just up the road and, not only do they produce some of – if not the best – casings in the industry, but .50 Alaskan is one of their standard offerings. In addition, they’re right next door to Sierra Bullets. Therefore, I have basically one-stop shopping for those components. Now I just need to pick up some powder…. I tried an assortment of loads with different bullets, but settled on the Sierra 400gr charged with 63g of IMR4831. This was one of Layne Simpson’s favorite loads when he took this cartridge around Africa and it has become mine. The recoil is heavy, but it’s accurate enough with benched groups consistently under 1” at 50 yds. In addition, I was able to maintain a 100% hit rate on 8” steel at 100 yards without support. Clearly good enough for bear work, considering most of the encounters are at far less distance than that. 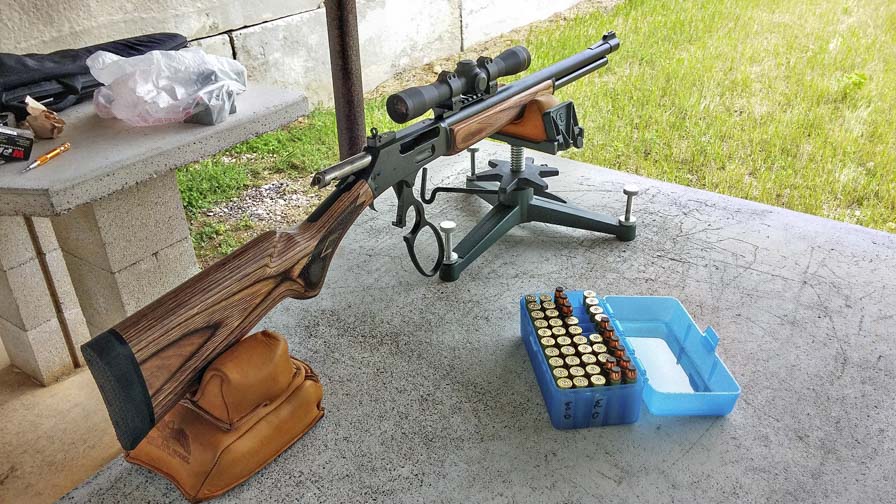 The gun is built well but still maintains some elements of its being a “Remlin”: poorly fitted stock, uneven bevel on the top of the action, and the serial number isn’t quite straight. However, SSK did everything they could to fix the issues we’ve seen with Marlins since Big Green took over their operation. The action is smoothed and tightened, the trigger now breaks like glass, the recoil pad is replaced with one more fitting of a large caliber, in addition to the items that SSK adds such as the banded front sight. Overall, I am very pleased with every aspect of this rifle. It’s very handy and fast to get on target. It has proven range reliable (of course, it’s a lever gun), it’s accurate, and delivers a lot of energy. In addition, I must say that I am really happy with the customer service SSK has provided for the rifle and the quality of workmanship that was put forth.

Fit & Finish * * * *
I must separate this into two categories. The fit and finish on Marlin’s part – and the work left behind even after it has been touched by SSK – I would rate at 2 or 3 stars. However, the quality of work shown by SSK is five stars. This is how I came to a four star rating.

Reliability * * * * *
It’s a lever gun. If it jams, chances are the user has done something wrong.

Accuracy * * * * *
Accuracy is relative and, in this case, superb. It’s not going to win any bench competitions, but it’s quite fine for a rifle such as this and for its intended use.

Accessories * * *
There’s really not a lot specific for this rifle other than what has already been installed (sights, scope rail). Naturally, there are plenty of bread and butter accessories to outfit the rifle for hunting.

In regards to ammunition, you must load it yourself. Great bullets – ranging from 300gr to 500gr – are available from a variety of sources such as Sierra, Northfork, and others. New brass is available from Starline; or you can fireform it yourself using 348 Winchester as the platform.