The Benelli M4 is a truly great shotgun. Reliable, enjoyable, and easy to aim — that’s the way to make ’em. The only problem is that it forces you to make a financial choice: do I want to buy the shotgun, or a small airplane? Benelli’s gear is top notch but it comes with a price tag that matches that awesomeness. For those of us who want both the shotgun and the airplane, the Turkish firearms manufacturer Linberta makes a smoothbore that has all the same bells and whistles as the Benelli M4 but without the jaw-dropping price tag. In theory. Is this another case of too good to be true? . . .

I fully admit that I had never heard of Linberta. In fact, there are quite a few firearms manufacturers sending stuff our way who are new to me. Apparently Linberta has been around since 1982, but they are just starting to stretch out into the American market.

The terribly-named SA01LSTAC20 Shotgun is, in every possible way, an M4gery. From the recoil system to the overal look and feel, this was clearly designed to be a poor man’s Benelli M4. I can’t fault them for that — there’s definitely a market for these guns, and offering them at a much lower price is a guaranteed way to move some boomsticks. Starting out at the muzzle, the gun ships with a selection of chokes as well as this muzzle brake-slash-door breaching attachment. It looks hilariously tacticool, but is very easily removed. The barrel is threaded for standard Benelli/Beretta chokes, which is something the Mossberg 930 SPX Tactical (almost identical features at twice the price) lacks. Interchangeable chokes are extremely important for those wishing to use this as more than just a nightstand gun.

Another great feature are the ghost ring sights. Ghost rings on a shotgun are basically cheating: put the front post on the target and pull the trigger to make it go away. The front sight post on these guns is a fixed solid piece of metal as opposed to the more preferable fiber optic front sight post. That’s a little disappointing, but I guess you can’t expect everything on your wish list, especially at this price. 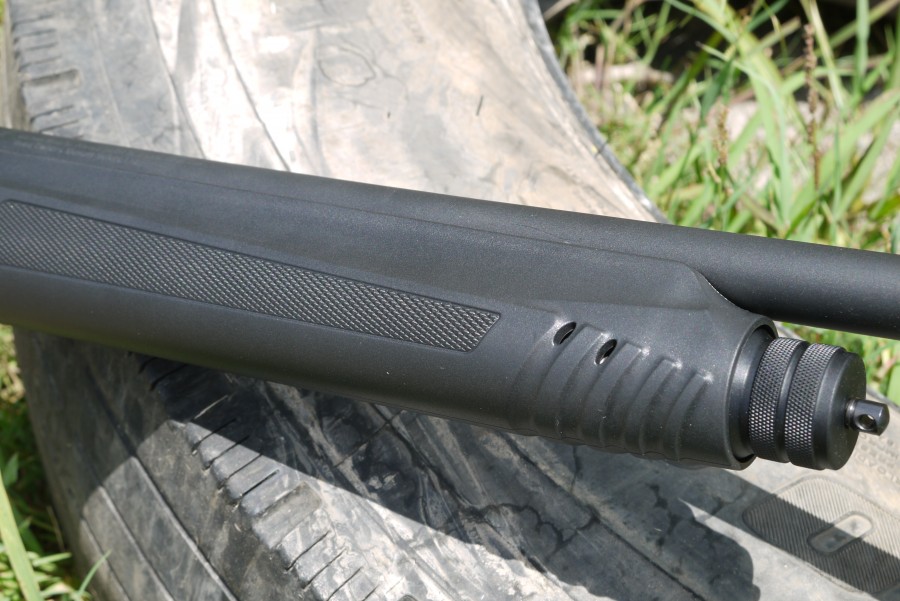 Moving a little further back we come to the forend. The gun is designed just like the M4 so it too has a 4+1 capacity and protruding magazine cap. The result is that the gun is still legal in laughable places like New York, but those of us who live in America can buy aftermarket extension tubes to raise that capacity to something a little more useful. I’ve seen people who have used Remington 870 extension tubes on this shotgun for that purpose but I was unable to conform that myself.

The checkering on the forend strikes the right balance of aggressiveness and comfort. You want it aggressive enough to grip with gloves or wet hands, but smooth enough that it doesn’t shred your palms. Linberta threads that needle quite well, and as a result the gun is very comfortable to hold. 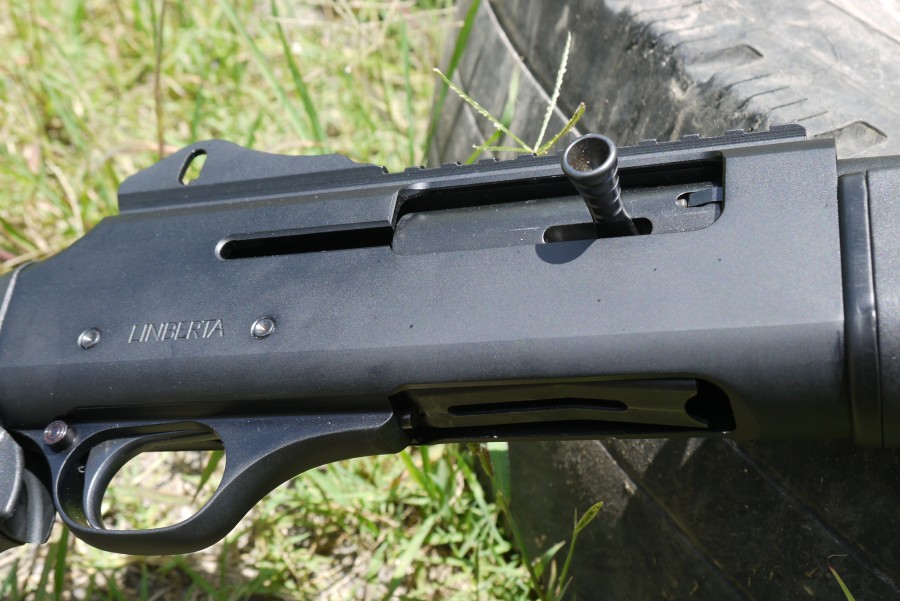 Just like the Benelli M4, the Linberta shotgun sports a long cylindrical charging handle. It’s very easy to wrap your hand around, and the length is just right so that it’s big enough to grasp, but small enough to not get caught on anything while cycling. There’s also a cross-bar safety, which I happen to prefer to Mossberg’s thumb safety. Up top we finally come to a difference between this and the Benelli. The M4 features a two-piece top rail and rear aperture sight where each piece bolts on individually. In Linberta’s case they just manufactured a one-piece solution and called it good. The rear aperture can be calibrated for both elevation and windage, which is a nice feature, but probably more than you need on a shotgun.

At first glance the rail section appears welded on, but in actuality it’s held in place by a couple screws. The top of the receiver and the rail section are grooved in such a way that they mate up to keep them from working free, but you can remove the rail section if you want to transition to a different barrel or sighting system. The Picatinny rail works just fine, but buyer beware: shotguns have a tendency to kill red dots.

The other side of the receiver sports a massive “PUSH TO RELEASE” button that is easy to hit in a hurry, but their version of the “Benelli Button” is a little strange. The ability to lock a shotgun open is essential in 3-gun matches. Not necessarily for running the stages themselves but instead for safety behind the firing line. With a normal short stroke piston operated shotgun like the Mossberg 930 you can simply rack the action on an empty magazine and the gun will lock itself open.

Systems like the Benelli and Linberta don’t typically work the same way. Unless you just fired the last round in your magazine you’ll need to push a button to get the gun to lock open. Benelli has their button located near the triggerguard, but Linberta puts theirs in a slightly more infuriating place. That little silver button you see protruding from the front of the triggerguard is their “Benelli button.” Depress it and the lifter slides a little further out of the receiver. Rack the shotgun and it now stays open.

In theory it works fine, but in practice it can be a little annoying. The button is hard to find if you’re in a hurry. Then again, in theory, you shouldn’t need it in a hurry. The loading gate has been profiled to make it easier to load additional rounds into the gun in fairly quick succession. Larry Houck of Team FNH USA in his typical West Virginia vernacular calls it “wallering out” the receiver and does it to his guns through judicious application of a Dremmel tool, Linberta saves you the time by doing it at the factory. Loading rounds is easy and effortless — I was even able to get some practice with the “load 2” technique and it ran like a dream. The stock is a synthetic polymer affair with a cheek piece just the right height for the ghost rings. The stock also features a pistol grip (again, just like the M4) which makes aiming the gun much more comfortable, and the rubber coating on the grip means I’m less likely to lose control when my hands are wet or oily. The stock features one more rubber component at the rear, namely a recoil reducing rubber pad. That’s not really required for things like light birdshot loads, but when you get into high brass one-ounce slugs you start to become very thankful for the person who decided to put that little strip of rubber there. Out on the range we threw everything we could think of into this gun. From pixie-fart-light bird loads to heavy slugs, it ate everything without a single complaint and required zero adjustment. I tried shooting a group with high brass slugs just for giggles and the above image is the result at 50 yards.

Overall I’m pleased. The gun is as fun to shoot as the M4 with all the same general features. There are, of course, some differences that make the Benelli a nicer gun. From the bolt hold open to the extra material left on the rubber grip, there are some indications that the same time and careful attention that goes into the Benelli are missing here. Will I pay $1,200+ more for improved fit and finish? Nah.

The competition for this gun has been right around the $500 to $700 mark. Mossberg’s 930 SPX fits that bill nicely, and while I’ve been using that gun for close to three years in 3-gun competitions I have to admit that there isn’t much the Linberta can’t match. One-to-one, the Linberta does everything the 930 SPX can at a fraction of the price. Then again, there isn’t the same avalanche of replacement barrels and replacement parts aren’t widely available for Linberta shotguns. And if things ever do go bad, I think I would rather buy a new shotgun than even attempt a trans-Atlantic RMA.

Accuracy: * * * *
I was slaughtering steel plates without an issue. Ghost rings are excellent.

Ergonomics: * * * * *
The stock feels nice and fits the body well. The rubber on the grip is a great addition.

Customization: *
There might be some magazine extensions that fit this gun, but there’s nothing specifically made for it.