“The .380 was a cute fad,” Springfield Armory’s print ads proclaim. “Now, let’s get back to business.” Back to business indeed. Forty-five caliber single-stack striker fired pistols aren’t exactly a new thing. Kahr and Glock have been making them since the naughties. Truth be told neither model has been flying off the shelves. But no one has made a pocket .45 this small. Our small-handed man Dan got to grips with the XD-S at the 2012 SHOT Show and loved it. But is the new XD-S really all that and a pocketful of protection . . .

Our sleek-looking dual-tone test XD-S arrived in the XDm-standard heavy duty briefcase. The diminutive XD-S looks mighty lonely in there. Speaking of optic distortions, the XD-S’ cavernous muzzle looks like a small snake about to eat a large rodent. The XD-S post-apocaltypic presence is an obvious mutation from what’s considered “normal” by today’s polite shooting society. For owners who believe that discretion is the better part of valor, an all-black XD-S could well be the better choice. 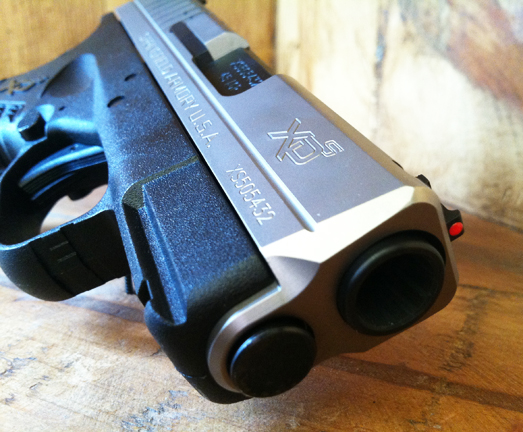 Like its fatter, taller big brothers the XD-S comes with two backstrap options; shooters can tailor the grip to gain comfortable access to the go-pedal. While the XD-S’ grip is skinnier than Gina Athans the XD-S fit my hands better than most pocket nines or .380s I’ve sampled.

That said, the XD-S sacrifices grip length in order to make good on its “noticeably unnoticeable” tag line. Anyone with mitts in the medium to freakishly huge range will find their pinky hanging off the end of the grip. Of a .45.

With the extended mag—yes, there is an extended mag—I could get my whole hand on the grip. Concealment? Not so much. With a replacement base plate pinky extension for the flush mags, the XD-S would be the king of the skinny minis. As it stands it’s a pretender to the throne. 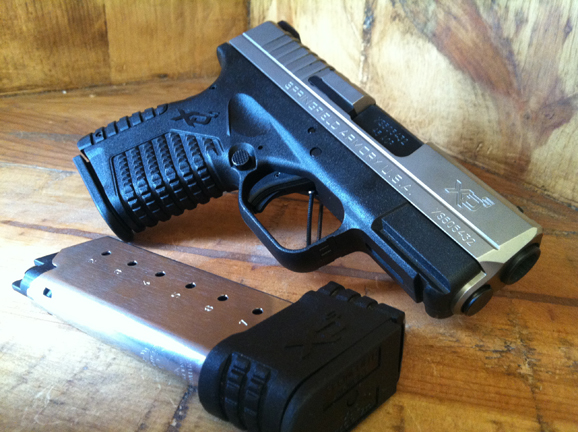 When it comes to the trigger, the XD-S is so unlike its predecessors (e.g., the Xdm 5.25) you’d swear it was made by Gaston’s mob. Springfield Armory calls it a short reset trigger. It’s firm with minimal take up, but not particularly heavy. The break is crisp. Reset takes minor forward travel. The sear re-engages with a commanding audible click and considerable tactical feedback. Like I said, Glock. Complete with Ultra Safety Assurance (USA) Action Trigger System. Yes Virginia, the XD-S is a highly concealable pistol. With its flat profile, the gun disappear in a pocket holster or an inside-the-waistband rig. Nestled in an outside-the-waistband holster under a T-shirt, the XD-S printed less than my fire department-issued pager. Low-profile three dot sights with a fiber optic front keep the XD-S from snagging when you pull it from your pocket or IWB holster. On paper and in-hand the XD-S is everything it claims to be: eergonomic and concealable with a trigger that eliminates the “Glock guys’ short-stroke” problem.” I took the XD-S .45 to the range during one of my class, along with 100 rounds of Federal 230 gr FMJ, 40 rounds of Hornady 185 gr Critical Defense and 20 rounds of Hornady 230 gr +P TAP. I shot the XD-S from five yards on a typically windy southwestern Montana day.

Drawing and presenting, the XD-S pointed quite naturally. The .45’s fiber optic front sight is easily acquired. My first two slow-fire mags indicated that gun size isn’t everything. The excellent trigger and enhanced ergonomics makes the XD-S accuracy at “gun-fighting” distances well within the “minute of bad guy” standard. As you’d expect, rapid fire at a man-sized target at the same distance opened up the groups. With the FMJ and Critical Defense loads, you could easily reproduce groups like the one in the head of the target below. However, blazing away with six rounds of +P produced less tightly gathered target perforation, as seen in the center of mass hits in the same target. Also unsurprising: XD-S’ extended magazine made for a more comfortable grip— with no appreciable effect on [my] accuracy. Did I mention recoil? Yeah, there’s a lot of it. You have to make sacrifices in order to have a .45 this small. You feel each and every shot in much more detail than you would with a full-sized carry piece. To steal a line from a guy on Reddit, it’s like high-fiving a hammer, albeit a small one.

In the video below, you can see that the XD-S is a jumpy little thing, a fact exacerbated by the use of +P ammo, which I’d definitely recommend in a pistol this small.

I had two of my colleagues run the XD-S to make sure I wasn’t being a pansy. They agreed with my assessment. After a few mags, you’ll feel a soreness creeping through your hands that’s typically reserved for those who like to punish themselves by regularly shooting .357 J frames. More recoil sensitive shooters should to wait for the smaller-chambered XD-S offerings so they’ll take the time to practice with this gun. My choice. 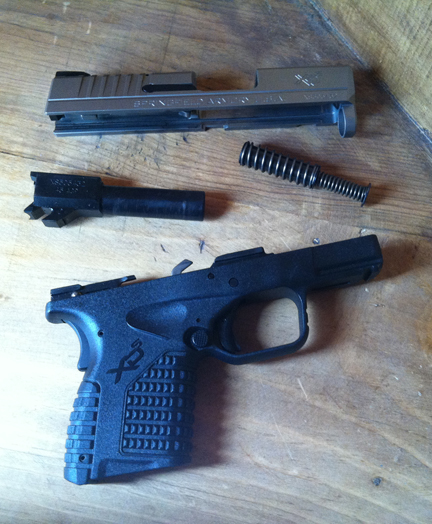 The XD-S delivers on Springfield Armory’s promises. It’s small, lightweight and easy to conceal. It has great ergos, an excellent trigger and shoots a cartridge that puts the .380 to shame. With six in the gun (seven with the extended mag) you have more than enough firepower to extricate yourself from a bad situation.

Uh-oh. Caliber wars! While you’re free to engage in that debate below, a topic RF is set to address shortly, the XD-S is off to TTAG’s Ralph to see how it stacks up against Glock’s skinny .45, the G36. Even if it loses that comparo, the Springfield XD-S is an excellent choice for concealed carriers willing to sacrifice capacity and [potential] muzzle jump issues for additional [potential] lethality.

Style * * * * *
The XDs takes its styling cues from the Xdm line; it’s one good looking handgun that will look even better in basic black.

Ergonomics  * * * *
Comfortable in the hands and points nice and naturally. Needs a pinky rest on the magazines to step it up a notch.

Reliability
I’m withholding stars from this category as lack of funds kept me from putting as much ammo through it as I’d have liked. It had no problems with any of the ammo I fed it, though. [ED: this rating will be updated later.]

Customize This  * *
The XD-S has a single-position Picantinny rail for lights and lasers and the inevitable K-BAR bayonet, but aftermarket accessories aren’t yet available. Given the penchant for people tinkering with their XD(m)s, it should only be a matter of time.

Overall Rating * * * 3/4
Heavy duty recoil and current lack of aftermarket parts knock this pistol down a few pegs, but if I needed a .45 for backup or pocket carry, the XD-S would be my first choice.