A couple years ago during the post-Newtown panic you couldn’t find a single round of 5.56 NATO ammo to save your life. Rimfire was just as scarce. But the one thing that seemed to be in stock no matter what was the plethora of pistol caliber cartridges. It seems like Americans have taken a more practical approach to caliber choice these days, opting for a firearm that will be easy to feed no matter the political climate. That has sparked a bit of a revolution in the firearms market, from the new pistol caliber SMGs like the MPX and Scorpion to a renaissance of the older MP5 design. Special Interest Arms has been in this market for years, and their latest creation is the “Novem” bolt action rifle chambered in 9mm . . .

Special Interest Arms is probably best known on the internet for their DeLisle Carbine reproductions — turning a Lee Enfield rifle into a whisper-quiet suppressed .45ACP-spitting monster from guns that once stalked the battlefields of WWII. The original Honey Badger, if you will. They haven’t made one in a while since they are a massive pain in the ass to produce. Instead, they’re making a 9mm long gun based on the Rock Island Armory .22TCM bolt action rifle. 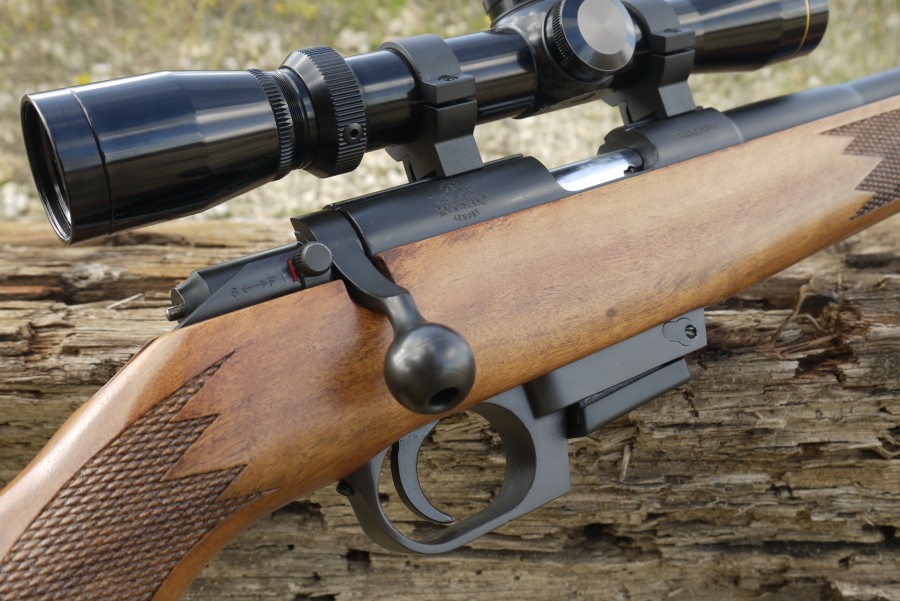 The majority of this rifle is a stock Rock Island Armory gun, and it isn’t that bad at all. The stock is a beautiful cut of wood with nice checkering. The bolt is well made and throws nicely. The action is a little bit on the gritty side, but nothing a few hundred rounds won’t fix (or a little lithium grease). Like I said, not too shabby.

Along the top of the receiver is a dovetail rail designed for rimfire use. I’m not complaining much since 9mm doesn’t have a ton of recoil, but for extended use I’d really prefer to see something more robust. Mounting a scope can be a little tricky and I’m very concerned about it coming lose when I need it most. This rifle is designed to work with the same magazines used in the .22TCM handguns produced by RIA, so while it ships with a single 5-round magazine you can easily swap it out for a 17-round mag instead. The magazine works just fine, feeds reliably, and is very easy to insert and remove. The push-button on the bottom of the gun is on the left side of the receiver which is a little odd for a rifle but makes sense given its pistol bloodlines.

The trigger is acceptable. A tiny bit of creep, but overall crisp and clean. While overall the rifle is nice enough, the real money maker here is the barrel. SIA makes a few different versions of this gun depending on how you want it. The one pictured (16 inches with a threaded barrel) being is the bog standard model. The gun is also available as a factory SBR, or with a short barrel and a cage extending out to make the required 16 inches. For those wanting a more DeLisle look, the option for an integrally suppressed version is available as well.

The threading on the rifle is excellent, and played nicely with my Liberty Mystic-X silencer. I didn’t have any issues or notice any accuracy difference between suppressed and unsuppressed shooting. I did notice that it reduced what little recoil was still present down to basically nothing, making this an excellent low-cost trainer or general plinking rifle.

Something interesting to note is that due to the barrel length, even typically subsonic ammunition will launch at above the speed of sound. That’s what happens when you add about 11 inches of runway. It’s not the end of the world — the rifle is still hilariously quiet, but the supersonic crack of the rounds going downrange aren’t as quiet as I would prefer. Shorter barrel lengths will fix this issue, so if you’re concerned, pick one of the SBR versions. Out on the range this gun is an absolute blast to shoot. The light recoil makes it just about as pleasant as a rimfire cartridge, but the heavier-hitting 9mm ball of lead means you can play around with the bigger steel plates and make them sound off. I really enjoyed my afternoon with the gun and was sincerely disappointed when I discovered that I had chewed through all of the ammunition I brought with me. It truly is a fun little rifle, made even better by the addition of a muffler on the end. Accuracy is very acceptable. This 50-yard target shows a group just over 2 MoA, even when counting the flier top right. Without that flier it calms down to about 1 MoA. Keep in mind that I was shooting Federal American Eagle ammunition and that’s pretty damn impressive. This rifle has an interesting niche in the market. The ammunition it fires is cheap enough to make this a plinking gun, yet still powerful enough to use as a small game rifle. It’s also accurate enough to be a long range trainer for those interested in conserving their stock of 7.62×51 NATO. If it were still chambered in the boutique .22TCM cartridge I would have some real concerns about ammo availability and price, but in 9mm, you should be able feed it no matter what.

If you don’t already have a pistol caliber rifle of some sort then this one is definitely worth a look. It’s also appealing for those who already bought one of the many pistol caliber SMGs that have come out in the last couple years, but I’d recommend spending the $200 on a tax stamp instead. Then again, if you don’t want to (or can’t) deal with the ATF and want a fun little 9mm rifle then the Novem should be on your wish list.

Fit, Finish, Build Quality: * * * *
The barrel is great and the rifle overall is excellent. Aside from a few some minor issues, I would prefer if the gun didn’t come sealed in a vat of oil.

Customization: * *
There’s a threaded barrel for your suppressing enjoyment.