What is one of the world’s most popular small game hunting calibers? It is, of course, the venerable .22 lr. While not the most suitable caliber for self-defense, the .22 lr is more than capable for accurate shooting, plinking, small game hunting, and other applications. Over the years, there have been many platforms that have fielded the .22 lr to great success.

Normally, when you hear Smith & Wesson, what comes to mind is quality firearms, striker-fired M&P handguns made in the USA, and the expansive array of different model revolvers. Today, while it’s not the cream of the crop of top most popular Smith & Wesson firearms, is still a firearm revered by many in small circles centered on rimfire accuracy. The gun in question happens to be a Smith & Wesson Model 41.

Going back to the 1950’s — well 1957 to be exact — is when this fine piece of craftsmanship arose from its days on the design board at Smith & Wesson. With its introduction to the market, there’s been a backorder on these ever since.

Appearance
This weapon is not like your everyday plastic Tupperware. Under the correct lighting conditions, the fit and finish turns this firearm into eye candy. With such a fine firearm, you’re sure to attract interest from other range-goers.

Fit and Finish
The wood and metal on this firearm makes the handling feel like something premium. It reminds you of a time when firearms were made of wood and metal. 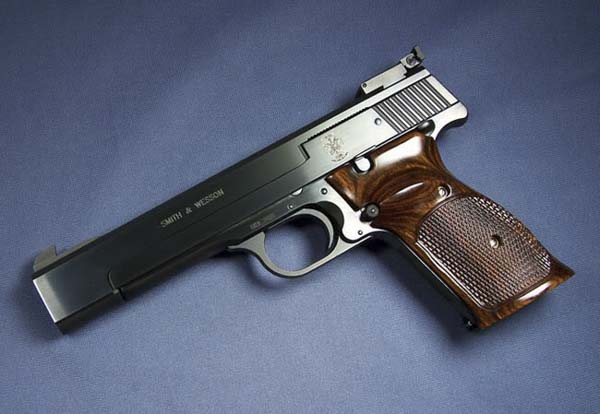 Ease of Use
Ease of use on the Model 41 is like operating a 1911. It’s as easy as inserting a magazine, racking the slide, flipping the safety to the off position, and you’re ready to shoot. Disassembly
The disassembly procedure on a S&W Model 41 is similar to that of a Makarov pistol. For basic disassembly and cleaning, pull the trigger guard down, lock the slide to the rear, and then the barrel simply pulls out (no pun intended). For further disassembly and taking the slide off, simply pull back, lift the slide a little, and release forward.

Of course, once you disassemble a firearm, you’re going to have to put it back together. The re-assembly is just as easy. Simply put the barrel onto the frame and hold barrel in place while you swing the trigger guard up against the barrel. After that, you have a full re-assembled gun. Because of its blowback design and ease of disassembly, you won’t have to feel like an Engineer trying to disassemble your way through a maze of small parts. Because of that, the Model 41 can be cleaned with ease.

Handling Characteristics
Upon the action of gripping the Model 41, it instinctively becomes an extension of one’s hand. If you’re in the market for a firearm to always remind you of the 1911 and its great inventor, then this is the gun for you. After shooting it for a while, it dawns on you that it’s designed to mimic the 1911 quite closely. The grip angle is almost exactly the same as that on a full size 1911. While not quite a good a design as the 1911, the slide release and manual safety are just about in the same place.

A five-and-half-inch barrel, along with 41 oz. of heft, makes poking holes in the center of a target look like child’s play. Part of its accuracy can be attributed to its trigger. As it stands, a crisp 2.7 to 3 lb. trigger pull with almost no over-travel makes accurate shooting all that much more fun. Trying to please people on a trigger’s over-travel isn’t as easy as it seems. So, the good folks at S&W had the novel idea of putting an over-travel adjustable stop screw to match your heart’s content. 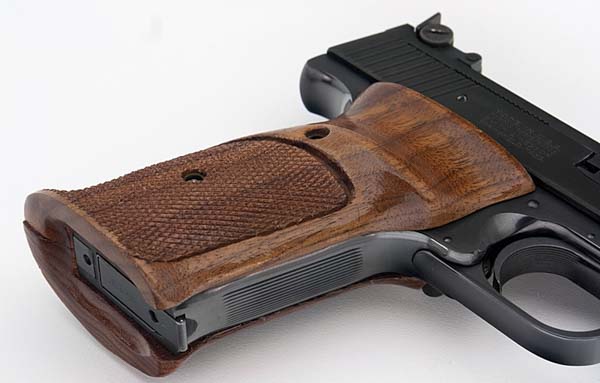 Reliability
To date, I’ve had no problems with cycling and feeding. The Model 41 was been superb. Even after lobbing a few thousand rounds at the range, there seem to be no hiccups on the part of the gun.

Applicability
Because of its accurate shooting, the Model 41 is mostly used in target shooting and competition. However, it could serve other purposes like plinking, small game hunting, and other applications. Self-defense was not mentioned here; however, even the .22 lr is still better than a stick.

Available Aftermarket Options
There is a decent aftermarket covering the Model 41. It’s nothing like the GLOCK aftermarket, but it’s big enough to sufficiently allow you to customize your gun to your liking. Finding what you need in a gun shop could be a bit difficult, but everything from holsters, parts and accessories can easily be had online.

Accuracy
By now, I am sure you’re well aware of the pistol’s feats and abilities. If winning rimfire pistol matches is your forte, then the Model 41 is an excellent option for the job. From a shootability standpoint, the gun prints one-inch or less patterns at ten yards. From a hand held rest, I am able to consistently put five shots in around an inch at 25 yards. Favorite Feature
Of all the features on this gun, my favorite feature is the quick detach barrel. It’s so easy, all one has to do is lock the slide to the rear, pull the trigger guard down and pull the barrel out. Because of that, cleaning is a breeze.

Least Favorite Feature
While this gun is near the top when it comes to precision .22s, it also has some downsides. The most notable is the safety. Sticking out an eighth of an inch from the gun’s frame, the safety looks like any other safety. However, upon operating the safety, it quickly becomes clear that it’s very stiff – it surely isn’t your everyday M&P Shield style safety that’s easily flicked on and off. Another minor negative is the weight. At a hefty 41 oz., it’s not the lightest gun out there, but it has a solid feel in the hand. Lastly, the price is also not its best attribute.

Accuracy * * * * *
Better than the shooter. This gun will let you know your shortcomings in pistol shooting.

Ergonomics * * * * *
The Model 41 is of similar proportions to a 1911 in terms of grip angle. The grip itself is molded to fit your hand exceptionally well.

Reliability * * * *
Reliability has been superb for a .22 rimfire. I must acknowledge that some people have complained of receiving Model 41’s that are ammo sensitive – for that, I am giving it four stars. Those with ammo sensitive S&W model 41’s tend to agree that running CCI SV 40 is the best option. However, mine has had no trouble whatsoever in the ammo department.

Customization * * *
There’s not a lot of customizations and accessories available. For those who have to absolutely have custom grips, then they will be pleased to find many offerings to suit your needs.

Value * * * *
There’s no denying that it’s expensive. However, you’re paying for top quality.

Overall * * * *
Despite the stiff safety on the Model 41, I really liked the gun. If you enjoy fine rimfire target pistols, the S&W Model 41 is not one to pass over. While it’s not the best of the best, consider it a cut above the rest.