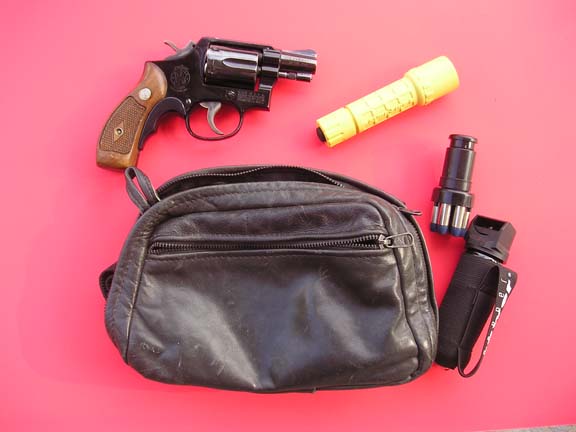 I picked up my Smith & Wesson Model 12 .38 Special in 1999 after reading an article on a customized one that looked really cool. I knew I wanted to have one made up for me. Like most such plans, it fell by the wayside in the face of family, work and finances. I kept it around though, because I liked the way it handled and I shot it a lot. I qualified for my Kentucky CCW license with it and even attended an Advanced Defensive Handgun course with John Farnam of Defense Training International. I was the only revolver shooter in the class. The 2” medium frame guns seem to have fallen from favor in the tidal wave of small, featherweight revolvers and compact semi-autos that are the flavor of the month for concealed carry these days. But the model 12, and other guns like it, offer some advantages over the lightweight pocket guns . . .

The S&W model 12 was made from 1952 to 1986, with the first models offered made completely of aluminum alloy. It didn’t take too long before it was found that the alloy cylinders wouldn’t hold up to firing even standard pressure .38 Special loads, and the guns were changed to steel in 1954. The all-alloy guns, commonly called the ‘Aircrewman’ model, are highly collectable nowadays.

The Model 12 was offered with either 2” or 4” barrels, in blue or nickel finish, and with a square or round butt like the old mainstay of the Smith & Wesson line, the Model 10 service revolver.  Mine is the blue 2” model.  With the round butt and 2” barrel, it weighs 19 ounces unloaded. In contrast, my J-frame Model 642 Airweight .38 Special with its Barami Hip Grip weighs 15 ounces, but comes with a smaller grip, sights that are harder to see and one less round. The Model 12 came with the original skinny grips. I’ve tried several different grip options, finally settling on just adding a Tyler T-Grip adaptor to it. Gee, can we say ‘simple?’ The trigger is narrow and serrated, which goes against the current thought that revolver triggers ‘must be smooth and rounded for shooting comfort.’  Nope, I like the serrations. I like knowing my finger isn’t going to move or slide around and the serrations naturally fall into the first joint of my trigger finger. Coincidentally, I have the same kind of trigger on my Model 19 .357 Magnum, too. The fixed rear sight notch and serrated front sight ramp are the same ones used on the full size Model 10 heavy barrel service revolver, so there’s no surprise there.

Since they aren’t made anymore – and I don’t think I can replace the frame anytime soon – I don’t shoot any +P loads through it.  I have in the past, but with the re-introduction in of the Federal 125gr Nyclad Hollowpoint, which was designed expressly for the short barreled .38s, I have no reason to beat up the gun with high pressure rounds.In my part of the country I can also find the Hornady Critical Defense 110gr Flextip jacketed hollowpoint round pretty easily. My reloads for practice and training are a standard pressure 158gr lead bullet and 4 grains of Winchester 231. Both loads were easy to shoot out of the short barreled K-frame, and were more than accurate enough for what it’s going to be used for. In shooting for this article, I stretched things out to 15 yards just to see what the full-framed gun would do. Yes, that short barrel is made more for bad breath range, but getting on target with the Model 12 was a lot easier than shooting a J-frame at that distance. And the K-frame-sized grip gave me more leverage for double action, something lacking in the smaller guns. Besides, not all self defense situations are ‘up close and personal,’ and knowing my gun is going to be accurate farther downrange is a comfort. My Model 12 served as my concealed carry gun for a while and I toted it around in an old Bianchi 3S Pistol Pocket IWB holster.  Even in the heat of a hot Alabama summer, the finish held up fine. I shot it every week and the only sign of all that use is telltale ring around the cylinder. If the hammer were bobbed, it might make a pretty good pocket gun. It may sound crazy, but no less an authority than Elmer Keith thought enough of the snubby K-frame to talk about it as a pocket gun in his book ‘Sixguns’ back in 1955. In those days though, men’s fashions were a little different, pants were roomier and coats were almost always worn. Elmer figured that if you were going to use a holster, you could just as easily carry a bigger gun and use a K-frame as backup.

If you are a fan of the K-frame guns, such as the Model 10, Model 15, Model 19, Model 66, etc., and use one on a regular basis, having one of these as a concealed carry gun makes a lot of sense. Most folks are more apt to carry the shorter, lighter gun anyway. Along those same lines, the speedloader for the six shot K-frames will also work with the Colt D-frame revolvers, such as the Detective Special, Cobra and Agent. This was a hot setup back when police officers still mainly carried revolvers, as they could use the same loader and ammo in both their primary or backup guns. It is still a viable technique today. 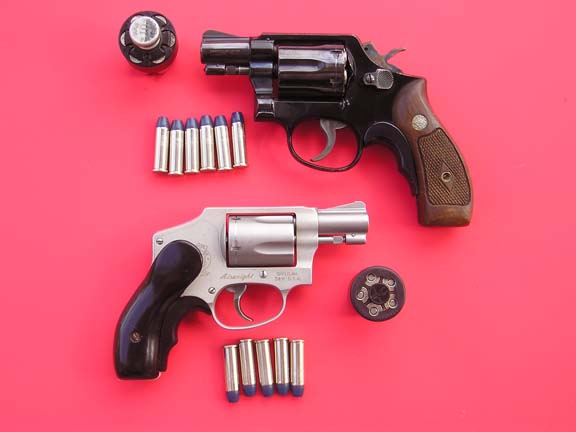 The concept of a medium frame, short barreled, lightweight revolver has been revitalized by Smith & Wesson with their Night Guard series, but the Model 12 is still an outstanding pistol in its own right. They’re still available out there on the used market, too. Check one out. I think you’ll find it useful.

Steve Collins is the Director of Training for S and L Training in southwestMissouri, teaching concealed carry and defensive firearms and tactics.  For more information on training opportunities, contact him at [email protected]  or on Facebook.