Shooting guns is probably the most fun you can have with clothes on. Unfortunately, as fun as it is to take your favorite 1911, GLOCK, or wheelgun to the range, it’s not exactly cheap to kill paper bad guys. That’s where the .22 long rifle comes into play.

It’s not as cheap as it once was, but it still is a fairly affordable way to hone your point and shoot pistol skills. However, a large portion of .22 pistols are cheap, clunky hunks of metal that aren’t exactly reliable or accurate. And clearing malfunctions every third shot is in no way fun. So what gun should you choose?

Personally, I believe that life is too short to shoot the cheapest hunk of junk you can find. Luckily, high quality .22 pistols like the Smith &Wesson M22A-1 can be had for less than $250.

The M22A-1 has a simple design, but it works. It looks good, and it has everything it needs to be a comfortable and effective gun. It comes with a surprising number of features included straight out of the box, including a full length Weaver style rail for mounting optics, a large patridge front sight, a rear sight that is adjustable for windage and elevation, and an aluminum alloy frame. Oh, and I cannot forget my favorite thing about this gun…the trigger. The trigger on the M22A-1 is the best trigger I have ever used. It’s single action, with just a little bit of slack, and then the cleanest break you can imagine. It breaks like a glass rod, which is something I hear people say all the time about all kinds of triggers, but that’s exactly what it feels like. The full length Weaver rail actually is the cause of my biggest gripe with this gun. Since it runs along the entire length of the gun, it sits above the slide. This makes it a little difficult to get a good grip on the slide, and it also causes my thumb to feel sore after a few hours of shooting. This issue would probably be remedied if I wore some of those cool operator gloves, but I’m not nearly tactical enough for that. 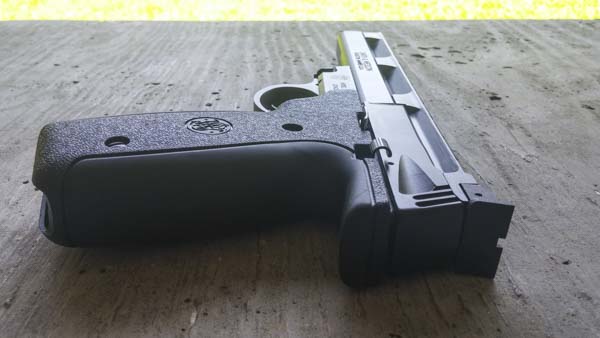 Two magazines are included with the firearm, and they work well. I have had no magazine-related issues. They are metal, and even though they are not much thicker than an actual .22 round they seem very sturdy. They do not bend at all, even when I really put some force into it.

Another thing I really like about the magazines is that they don’t just drop out when you hit the magazine release. They are pushed out, making speedy reloads a breeze. However, since the magazines sit flush with the bottom of the grip, getting them to lock into place can be a bit difficult. You either need to slam it in or get it placed just right on the heel of your palm when inserting a fresh magazine.

The alloy frame and the 5.5” barrel make the M22A-1 feel very front heavy, but while firing, you don’t notice it as much. Being a .22LR, the gun doesn’t have much recoil to begin with, but the heaviness of the barrel keeps the pistol on target even with rapid fire. The virtually nonexistent recoil coupled with the amazing trigger, make this gun an absolute pleasure to shoot.

However, the .22 long rifle isn’t exactly a cartridge known for its outstanding reliability. So, as expected, I have had a few minor issues. I’ve gotten almost one thousand rounds through this pistol (in the high 800’s if you want to be exact) and I have had a few stovepipes. I also had one instance where I had to actually remove the barrel and pull a round out of the chamber with a pair of pliers. I firmly believe this was due to the fact that I was using the cheapest bulk ammo I could find. While using CCI standard, I had zero malfunctions. Every round fired, ejected, loaded the next round. No exceptions. Field stripping the M22A-1 is just as easy as shooting it. You simply grab the barrel, push the takedown button, lift up and push back towards the slide, and the barrel and top rail come off. Simply lift the slide off and the recoil spring and guide rod come off too. That’s it. No tools required (looking at you Browning Buckmark.)

All guns have high points (except Hi-Points…I’m kidding…kind of) and low points, and the M22A-1 isn’t an exception. It has a couple of minor ergonomic issues and it doesn’t take GLOCK mags, but it has the best trigger I’ve ever used. Other than that you have an accurate pistol that is a blast to shoot.

Style * * * *
The design is simple but effective. It’s a good looking gun.

Ergonomics * * * *
It’s kind of front heavy, but it feels great in hand. The rail position and awkward magazine release detract some, but not enough to be a deal breaker.

Reliability * * * *
Runs perfectly with good ammo. Had a few hiccups with the cheap stuff.

Customization * * *
Most optics that fit a Weaver style rail and a few different grips.

Carry *
Just because you can doesn’t mean you should.

Overall * * * *
The M22A-1 is a solid pistol. Reliable, accurate, and fun as hell. The perfect trigger makes up for a few minor ergonomic flaws. All-in-all, it’s a really nice gun for a really nice price.