Origins of a Copperhead

SIG SAUER officially released the MPX Copperhead Pistol at SHOT Show 2019 in Sin City, USA, this past January. Some may be curious where the “Copperhead” name came from.

According to SIG SAUER, the MPX Copperhead was a project developed very similar to the Rattler SBR. The goal here was to create the smallest possible platform, while reducing snag points, and maximizing concealability. It name also has to do with the custom Cerakote color that adorns each and every Copperhead.

The Copperhead has a 3.5” barrel with an integrated muzzle brake to prevent gas from blowing back into the handguard, or onto the shooter. We were informed that any MPX 9mm barrel will work on the Copperhead.

Shooters wishing to utilize, say a SIG SAUER suppressor, or any can for that matter, are going to want to opt for the 4.5” “K barrel.” That will allow you to utilize the threads to mount a can if you so desire, or your favorite muzzle device.

Recently SIG released a version with a 4.5” “K barrel” for government agencies, with public sale soon to follow. SIG will also be releasing a version as an SBR with a functioning stock. As it stands, you can get a “2 position pistol contour brace” (as shown), or a folding pistol brace.

SIG SAUER was very specific in mentioning that the engine driving the MPX Copperhead is the same exact system as all other gen 2 MPX’s. No changes were made to the platform itself, only aesthetics. That’s important, as everything needs updating now and again, otherwise we would be talking about “tactical flintlock pistols.”

The MPX Copperhead was designed in part from a customer who was looking for a lower cost version of the MPX that had additional features, but didn’t sacrifice its most important feature, its closed rotating bolt design. Add in the fact that the MPX Copperhead is fully ambidextrous, and you have a serious contender in the personal defense market.

However, as a SIG SAUER rep told me, this version of the MPX Copperhead Pistol (3.5” barrel) was primarily intended for personal defense, to be carried discreetly in a small bag, or in your vehicle (as and where legal, of course).

While SIG SAUER listened to customer input, they also listened very intently to the “professional community.” We were informed that many government contracts have already been awarded for the MPX Copperhead. Primarily the U.S. Armed Forces, and its desire for a compact, lightweight, sub gun in a pistol caliber.

Every Bit as Poisonous as its Name

This little fire breather uses a monolithic upper and integrated lower knuckle, with a 2-position pistol contour brace (PCB). Based on customer input, SIG developed the PCB with the intent of making it easier for the shooter to get down on the sights and maneuver without having to lock your arm out straight. The PCB pivots to provide comfort for the user as they are shooting and moving, while ensuring a better pistol shooting experience.

While the MPX Copperhead may look similar to an AR-15 modern sporting pistol, that’s about where it ends. When you separate the upper and lower receivers, you will instantly see the differences.

The two platforms are more like “cousins” if that helps. There is no buffer tube, as the SIG MPX design uses a twin spring recoil system that rides over the bolt, and under the charging handle.

What helps define and set apart the MPX Copperhead from its competition is that SIG went with a tried-and-true short-stroke gas piston with a closed rotating bolt design. SIG states it has been extensively tested and professionally used in the PCC competition community. 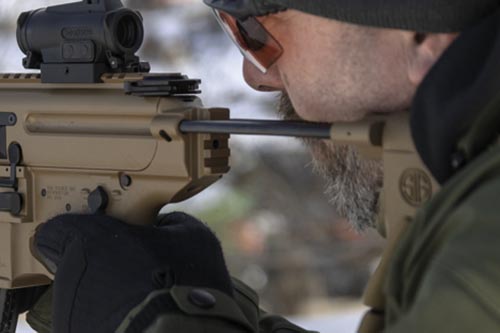 If you also take note at the rear of the MPX Copperhead, it has a vertical 3-slot Picatinny rail built into the lower receiver. This allows the shooter to mount any type of sling attachment that they so desire, making it very versatile.

As far as accessories are concerned, SIG SAUER seems to have this area covered. There is a steady aftermarket selection as well.

The operating system is the money maker for the MPX Copperhead. SIG SAUER states that they have spent years perfecting and modifying this design in an effort to make it “more reliable than any blowback system on the market today.” They chose a tried and true closed rotating bolt design, along with SIG’s legendary gas piston for a cleaner, and cooler running Copperhead.

Also noteworthy is that AR triggers will not work with the MPX line. However, there is a good aftermarket to support the MPX Copperhead, with options from companies such as Timney, Mid-West Ind., and Lancer to name a few. With aftermarket support like this, you can swap triggers, handguards, etc., and that’s not even counting all of the SIG SAUER branded swappable parts.

I’ve had the opportunity to test many 9mm pistol caliber carbines, and can tell you without a doubt that the MPX Copperhead is one of the most concealable 9mm PCC’s in its class. If your spouse carries the kitchen sink in their purse, this too should fit in there alongside the spare roll of TP, and the 15-20 pens at the bottom.

I successfully fit the MPX Copperhead into many smaller handbags that a woman might use. I personally use a Drago Gear “Tracker Backpack” on a daily basis (above) as my Jeep lacks a top and doors for half of the year.

For a daypack, it carries everything I need, including the Copperhead. It’s like it slithered its way in there, and it fits like a glove. Not only that, but it fit loaded while with a 20-round magazine inserted. There are plenty of other pockets in this bag for more reloads as well.

The Copperhead ships without sights allowing you to choose irons or an optic. As an aiming device, the Holosun HS515CU was chosen for this review rather than iron sights.

Given past experiences with other Holosun optics, there were no worries here. This thing has a 50k hour battery life, using a simple CR2032 (watch battery). It’s green LED projects a clear, crisp 2MOA dot inside a 65MOA ring. The user has the option to use either, or both. The Holosun HS515CU is a parallax free optic with unlimited eye relief.

One of my favorite features is the “Shake Awake” option. In a nutshell, it goes to sleep shortly after you set your weapon down. The vibrations of grabbing said weapon will immediately shake it awake and project its green dot. It’s like it never went to sleep in the first place. Made of 6061 aluminum, it can take a serious ass beating. But that’s for another article entirely….

Shooting In A Polar Vortex

Range time with the MPX Copperhead was a blast (pun intended). We had been hit with a Polar Vortex that swept across parts of the Northern U.S. and Canada this past winter. Single digit temperatures with wind and blowing snow seemed like the “logical” time to go out and do some shooting.

The Copperhead was subjected to approximately 750-ish rounds, consisting of a mixture of HP, FMJ, TMJ, pretty much whatever I could find to feed it. It was dropped in the snow, kicked around, chambered, and then fired like a boss.

Reliability was never an issue as the Copperhead kept digesting ammo without hesitation, and putting rounds on target. Here’s what I fed it:

[Bullet weight measured in grains, velocity in FPS by Caldwell G2 Ballistic Precision Chronograph at 15 feet, and accuracy in inches for best five-shot groupings at 20 yards from a Vanguard Scout Shooting Stick.]

Speaking of targets, every load tested came in under 1 inch in group size, save for one, which was just barely over 1 inch. SIG SAUER Elite V-Crown 124gr. JHP netted us a .56-inch grouping at just 20 yards. Now, one might think, “Why only 20 yards?”

Realistically, 60 feet (20 yards) is more than enough distance to wring out a sub-gun type of pistol with a 3.5” barrel, especially for a “defensive situation.” In the interest of full disclosure, a Vanguard Scout Bi-Pod Shooting Stick was used to help net these results. It just goes to show us how accurate this little fire breather can be.

SIG SAUER informed us that they tested the MPX Copperhead extensively using what they call “DV Testing” (design validation). SIG’s “DV testing” consists in part by using 10-15 random examples, and running them through environmental, endurance, safety procedures, and ammo compatibility.

SIG stated that they conduct these tests on every platform they design so as to exceed expectations of their commercial and professional customers. I see no reason to doubt those claims, as the MPX Copperhead more than met expectations during testing.

The representative from SIG SAUER that we spoke with also stated that their intent with the MPX Copperhead was “to offer the market a sub gun that was easily concealable for situations where people would want a self-defense weapon that was reliable, easy, and quick to deploy.” Given what we’ve seen and experienced with the SIG SAUER MPX Copperhead Pistol, it’s safe to say that SIG SAUER hit that design goal.

Fit and Finish: * * * *
The “Copperhead” custom Cerakote paint used on the pistol is very tough. Mine scraped across some barbed wire and came away looking just fine. SIG SAUER did a very nice job on this one.

Accuracy * * * * *
It’s hard to argue with the results. Twenty yards was more than a realistic distance for a personal defense pistol of this design. The SIG SAUER Elite V-Crown 124gr. JHP came ripping out of the barrel at 1167 FPS and scored a just over a half-inch grouping. HSM 115gr. Hornady XTP netted 1190 FPS and .62 inches. That’s hot and fast accuracy headed towards bad guys.

Ergonomics * * * * *
While the SIG MPX Copperhead pistol is certainly small, it feels good in the hands with no sharp edges or other concerns noted in that respect. It’s very “AR-ish” as far as ergonomics go, and that’s a good thing.

Reliability * * * * *
I’ve been playing with the Copperhead for a while now and have no long-term reliability concerns. It’s eaten everything I’ve fed it, and it loves an ice-cold meal.

Customize This: * * *
Ambidextrous side charger?

Overall * * * * 1/2
The SIG SAUER MPX Copperhead is an impressive little pistol. Especially given its cold weather performance, and punishment during that Polar Vortex we endured. While it’s full-featured out of the box, a threaded barrel would be more useful, and efficient. While it isn’t inexpensive, it makes for a great Jeep or truck gun for those who have the valid “Papers, PLEASE!”