Savage Arms has quite a respectable following for bolt action center fire rifles. Their dedication to creating accurate bolt guns has always kept them on the short list of anybody looking for a new precision rifle. However, hidden away in Savage’s catalog is an underappreciated treasure that has never had its time in the spotlight. This treasure is the Savage 64F in .22lr. 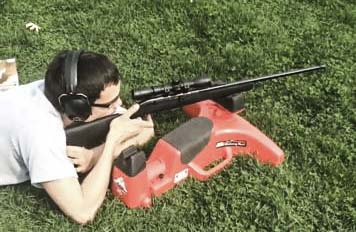 The 64F has never been a rifle known by mainstream gun enthusiasts. In a world dominated by the Ruger 10/22 there is never much thought of other semi auto .22 rifles, let alone one made by Savage.

However, the 64F is a great rifle based on the Cooey 64b rifle. It comes with a polymer matte black stock and a simple satin finish on the barrel of the rifle. While there are not many details on what type of finish savage uses on the 64F I have shot multiple times in the snow and rain and have never had any type of rust or wear issues.

The rifle comes with one ten-round box magazine and this is where you may have some problems. The magazine that came with my rifle was just awful. There was not a single good thing to say about it. Roughly half of the rounds in my magazine would not feed properly and the bolt’s momentum would bend the bullet in the case rendering the round completely useless. I did some research on this and found that it is a fairly usual occurrence with Savage 64Fs and after buying a new magazine for around $12 my rifle was back in perfect working order. This was the only defect I have ever found with the rifle and with the new magazine I have never had any malfunctions in the hundreds of rounds I have put through it since.

Using the 64F is fairly standard and convenient. The charging handle is located on the right side of the rifle and the safety is a classic push forward lever found on most bolt action rifles.  The one place where the 64F’s handling gets a little unusual is the magazine. The magazines are a rock-in style with the catch located on the front. This results in the magazine release also being in front of the magazine. While this is somewhat unique it is nothing that has ever caused me any problems.

Once you are used to using your off hand index finger to push the magazine release while you rock the magazine out you will find that it is really nothing to scoff at. The rifle also makes these magazine changes very easy to do. The rifle is a mere 5lbs. and in spite of being so light it feels very full sized. With a 21 inch barrel and a fairly full grip the rifle feels very comfortable even for a taller person like myself.

Like most .22 rifles, there is not much need to take the Savage 64F apart and clean every piece to guarantee reliability.  As I previously mentioned, after buying a new magazine for the rifle I have never had a single malfunction. I find this very impressive considering that I have never once done more to clean the rifle than just wipe the bolt off and give it a coat of oil without even disassembling it.  I have come to learn that whether the rifle is neglected or cared for it will always function properly (assuming you have a good magazine).

The Savage 64F’s main deterrent when compared to other .22s is the aftermarket options available. There is literally nothing offered for the 64F; not even an extended magazine. The rifle does come with sling mounts that can be used for a sling or bipod as well as a dove tail rail that allows you to easily mount an optic. My 64F dawns a BSA .22 special 3-9 scope. Sadly, with the 64F having been out for quite some time now the lack of aftermarket parts probably won’t change.

The best feature of this rifle isn’t technically a feature of the gun itself but is instead the price. Savage 64Fs have an MSRP of $140! This is close to a third of the MSRP for some Ruger 10/22 models. I bought mine for $144 after taxes.  For such an awesome and accurate rifle you get everything that the 10/22 offers besides aftermarket customization which I personally didn’t care about at all. It’s hard not to consider such a low price for such a great rifle the best feature of the Savage 64F.

The worst feature by far is the trigger. The only way the trigger could be worse on the Savage 64F is if it weren’t there. The trigger pull starts out with a fair amount of take up stopped by an extremely spongy zone (that can’t really be described as a wall), and once you pull your way through this spongy zone the rifle goes off. It does a great job at surprising you while you slowly increase the force that you are pulling with, but from a company known for their amazing triggers this one leaves you wishing that Savage had focused just a little more on it.

Accuracy is by far the best feature of the Savage 64F. When fitted with an optic, I have found the rifle to be very easily a 2 MOA gun with the Winchester white box bulk ammo that I have. The barrel of the 64F comes free floated to help make the rifle more accurate and even with the bad trigger my girlfriend was consistently shooting one-inch groups at 100 yards on the day that I taught her how to shoot.

Seeing a complete novice shoot 1 MOA groups with such ease filled me with extreme optimism, and a few weeks later I went to my public range to see if I could produce the same 1 MOA results at 200 yards. It was a pretty windy day and after wasting quite a few rounds sighting in at 200 yards I put up a new target and started my accuracy test.  To my surprise the first three-shot group measured in right around 3.75 inches! 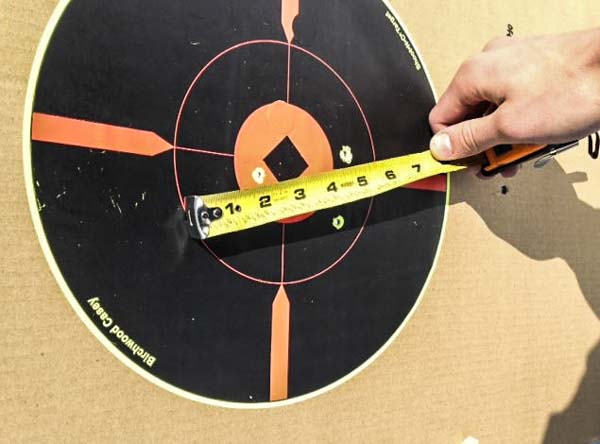 Knowing that my Winchester white box ammo was not match grade ammo I immediately covered my shots up and went back to the bench to make sure that it wasn’t a fluke. I took my time and put another three shots carefully onto the target. To my amazement this second three-shot group measured right at 2.5 inches! I literally shot better groups than the guy one bench over from me with a Remington 700 in .308win. I spent the rest of the day shooting at 200 yards with the rifle consistently averaging around four-inch groups.

Overall the Savage 64F is a great rifle. The quality that you receive for such an affordable price is unparalleled in the market for .22 rifles today. Having such an accurate .22 makes plinking much more enjoyable. You can rest assured that you’ll hit what you’re aiming at even with cheaper bulk ammo.

Even though using the rifle may take a little getting used to it is something that people of all ages can learn fairly quickly allowing anyone to experience the joy of plinking with a .22. If you are looking for an accurate, cheap, and quality .22 rifle that you don’t mind not being able to customize I would highly recommend the Savage 64F.

Ergonomics: * * * *
Rifle is very light and comfortable but has an awful trigger