The eternal debate rages on about just how useful the bullpup design is in modern firearms. Some people really like it, especially those who need a compact firearm for close quarters fighting. Some people also really hate it, usually those who need to hit things at a slightly longer distance. While the discussion continues, a number of countries have already adopted bullpup style rifles for their military, and today I would like to present you with one of the lesser-known examples. No, it’s not Steyer Aug, it’s his Singaporean cousin the SAR 21.

There are some definite similarities between this rife and the Austrian wundergun, but there are some major differences as well. Whether they are improvements, though, is up to you. The most obvious difference is the charging handle. Where the AUG or the Tavor has the charging handle on the left side of the gun, the SAR 21 places it in the middle, more like the G36 rifle. It also borrows the concept of a floppy design for the actual handle bit from the G36, allowing either left or right handed shooters to get a good grip. However, unlike the G36 the SAR 21’s handle doesn’t seem to want to snap back into line when you release it. The G36’s handle has a tendency to wobble like a flaccid penis and eventually come to rest in the middle of the gun, but the SAR 21’s handle just sits there staring at you. Difference #2 is the sighting system. The SAR 21 comes with a fixed power integrated scope and a distinct lack of rail space for anything else. The design is almost identical to the original AUG, but ever since 1982 the later edition (the AUG A2) features a Picatinny rail instead of the scope. The SAR 21 was designed in the mid-1990s so they were well aware of the change, but decided to go with the fixed scope anyway.

A nice feature of this fixed scope is the addition of a set of iron sights along the top of the tube. You don’t really notice them unless you are looking for them, but they could prove useful if the scope is damaged or the target is too close. 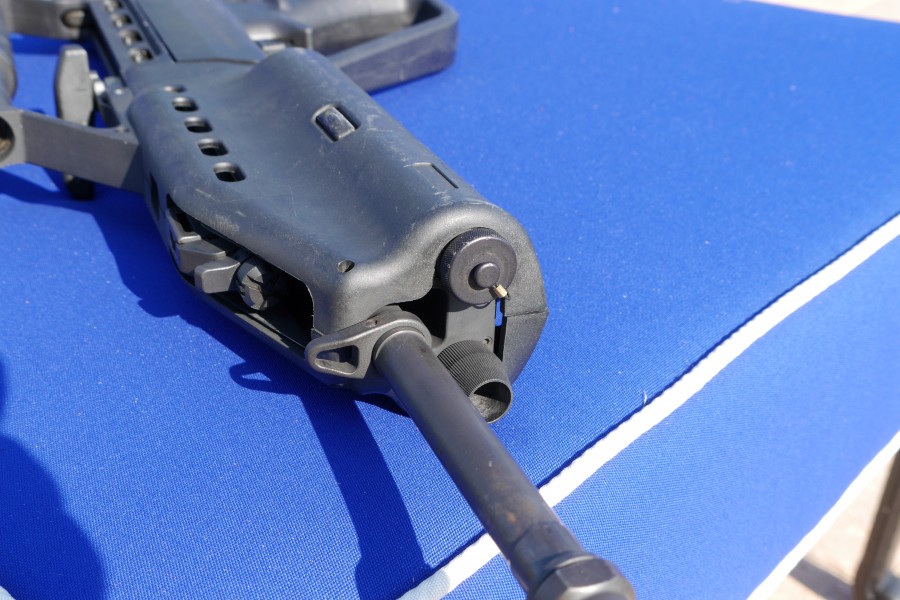 The last major difference is in the forend. Instead of just having a slim handguard, the designers fitted the rifle with an integrated laser. The aperture is on the right side of the barrel (bottom in this picture) and the battery compartment is easily accessible on the left. Unfortunately, while the charging handle is more ambidextrous than the AUG, there’s only one activation pad for the laser and it is on the left side of the gun. Lefties might have a hard time hitting that.

Enough with the good, now for the bad.

The gun feels like a cheap knock-off of a mainstream bullpup. The quality of the plastic reminds me of the cheap “Made in China” toys that you’d buy in the morning and would be broken in time for lunch. It’s not exactly the high-quality polymer that we’re used to in the United States. That cheap feeling continues in almost every aspect of the gun, from the magazine to the trigger and even the sights. It feels like a gun that was designed and built in the early 1980s, not 1999.

Out on the range, however, the gun does have its appeal. Specifically, the gun has an extremely slow rate of fire in fully automatic mode — and by “slow” I mean somewhere in the 500 rounds per minute range. The Thompson SMG is my yardstick when it comes to cyclic rates of fire, and this thing is 100 rounds slower than that gun. It makes for an exceptionally easy to control firearm and excellent accuracy in fully automatic mode.

Switching between full auto and semi auto, however, is very awkward. The safety selector is a cross-bar design by the trigger guard, but the fire control selector is in the buttstock of the gun. So to switch from semi to full, you need to take the gun off your shoulder and push the cross-bar style fire selector with your weapon hand. Definitely not something you’re gunna do in the middle of a fight, so I would just leave it on full auto. There’s no doubt that the SAR 21 is an ugly duckling. The crappy looking plastic combined with the awkward controls and odd choice of an integrated laser sight drop it straight out of my list of desirable rifles, but that’s not to say that it doesn’t have its charm. A slow rate of fire is something I enjoy, and for that I’m grateful. I just wish the package was better thought out. Thankfully Singapore is coming out with an updated version that fixes all these gripes and more, but there’s no word on when exactly that will happen. Soon, hopefully.

Accuracy: * * * *
A slow rate of fire makes for an accurate machine gun.

Ergonomics Firing: * * *
Awkward to hold, but the slow rate of fire makes it easy to hold on.

Customization:
There is literally no way to customize the gun. I haven’t even been able to find replacement magazines.

Overall Rating: *
It’s cool to see it from a “hey look at this obscure object” perspective, but it’s definitely not my favorite thing in the world.