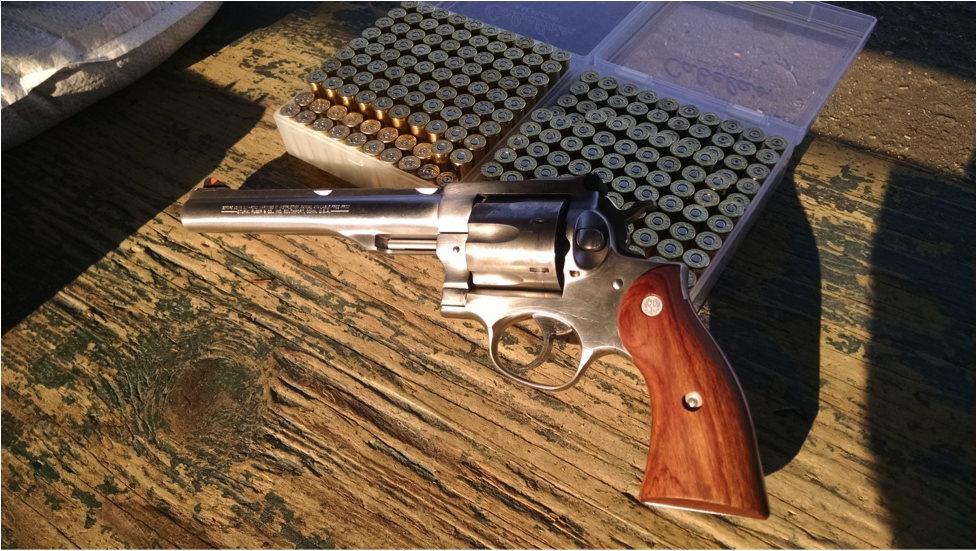 (This is a reader-submitted review)

By Russ C. in Alaska

The Ruger Redhawk is Sturm, Ruger & Co.’s flagship revolver, providing the user with the cannon-like firepower of the .44 Magnum since its introduction in 1979. The Redhawk is offered in several configurations; mine is the Hunter model, with a 7.5-inch barrel, ready to accept a scope, should you want to meddle with the beauty of the beast . . . 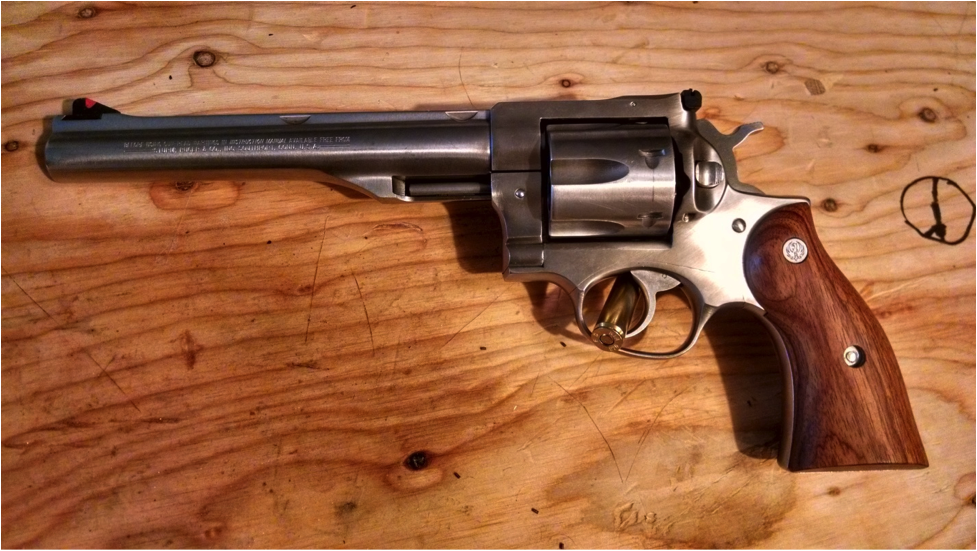 Legend tells of a Redhawk born of the depths of Hades in an age long past that boasted a mystical blued finish. Alas, ‘tis fated to remain legend. This baby is sporting a very blasé brushed-stainless patina. Functional and nondescript. Perfect for those who find themselves traipsing about in the Alaskan bush, looking for trouble.

It seems to me that “revolver guys” tend to fall into one of two camps: Those who have an affinity for the elegant, classic lines of the Smith & Wesson revolvers and those who gravitate more to the rugged, overbuilt simplicity of the Ruger revolvers. I’ve always been one to abide by the “function before form” mantra passed down by generations of broke farmers. I suppose it’s just a happy bonus that I think the Redhawk is sexy as all get-out.

This gun just works. There’s no two ways around it. Revolvers in general are already about as dummy proof as you can get and the Redhawk adds a level of “Finally…something even my demon-spawn teenagers can’t break!” reliability.

Some people take issue with the fact that the Ruger frames are cast steel, while Smith’s frames are forged. In true internet commando fashion, there are plenty of people berating the “inferior” strength of those cast Ruger frames online. And to those people, I say…you don’t know what you’re talking about.

To be frank, I’ve little experience with taking down a revolver; I’ve simply never had to do it. All cleaning can be done simply by opening the cylinder, and wiping everything down. Cleaning procedures are about as simple as it gets. Swab the barrel, swab the cylinder and chambers, and you’re good to go — unless you go out for an extended session with lots of cast bullets. If that’s the case, you’d better pull your easy chair up to the work bench. You’re in for a long day of cleaning.

Now, as you may have guessed, this long-snouted mongrel is a bit front-heavy. Not unbearable by any means, but it does take some getting used to. And it does work out your wrists. That’s right, I said “wrists.” Plural. In the words of Jerry Miculek, “If your support hand doesn’t hurt as much as your shooting hand, you’re doing something wrong.” Or something like that. To that end, this is NOT a pistol anyone I know can comfortably and controllably shoot one-handed. Listen to your mama’s words, use both hands. 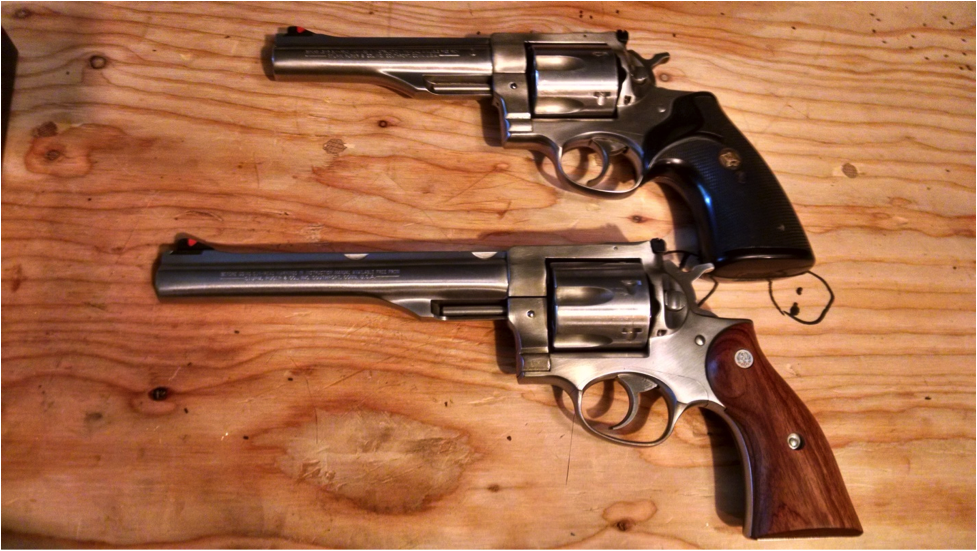 There are several different grip options for you to choose from including hardwood, rosewood, black micarta, and Hogue Monogrip. Mine came with the factory hardwood grips, and as you can see, they are considerably smaller than the (what I believe to be) Pachmayr grips on the 5.5-inch Redhawk seen here. This will be a largely personal decision. Some prefer the larger grips as they do help to tame felt recoil. Others, like myself, prefer the smaller grips for the ability to really clamp down on the gun.

As you’ve probably read before, most factory revolver double-action triggers kind of suck. They’re long, heavy, and rarely smooth. Fortunately, this one wasn’t half bad. It’s long, and it’s heavy, but at least we seem to have avoided the “cinder block over asphalt” feel. And compared to my ’02 Redhawk, the 5.5-inch from 1985 is considerably smoother, so I’m holding out hope that it comes with time.

That said, the single-action trigger is the bomb. Ruger’s single-spring mechanism allows for a smooth, light trigger pull. There’s just nothing to it.

You squeeze, just so slightly, and the trigger doesn’t budge. You apply the slightest pressure, and BOOM! Fire and noise and terror erupt forth like Cerberus just plowed through the gates of Hell, and he’s (they’re?) coming for YOU. Ruger’s single-spring mechanism allows for a smooth, light trigger pull.

Needless to say, unless you’re built like Shrek, this is not a contender for EDC duty. At 13-inches long and 54-ounces empty, you might as well strap your mother-in-law to your belt. On second thought, don’t. At least the revolver isn’t as loud and abusive.

To put that in context, a GLOCK 19 (my actual EDC) weighs in at a measly 23.65 ounces empty. Lightweight. 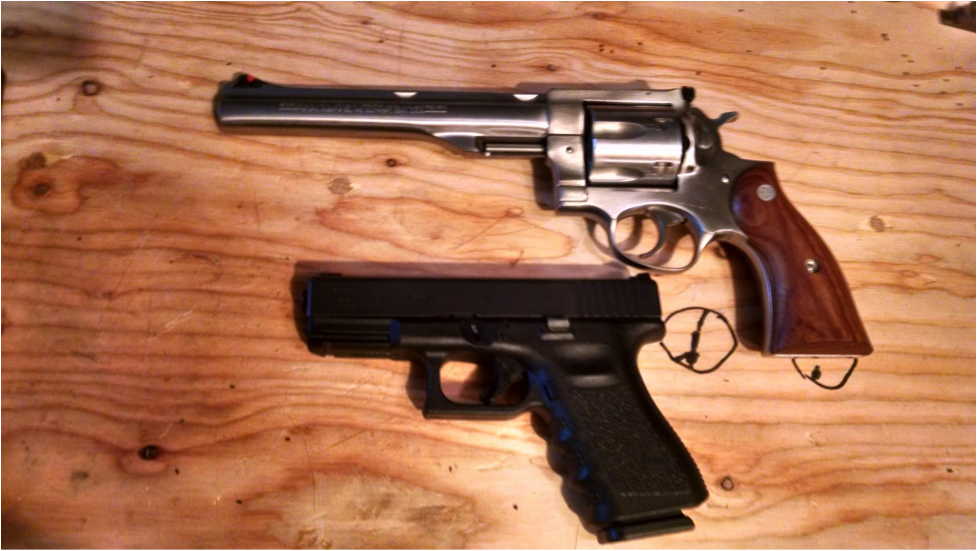 That being said, the Redhawk is a woods gun. Worn properly, it fits that role well. My personal favorite is a chest holster from Diamond D Custom Leather up in Wasilla. Because mine is still being made, I present to you this beautiful stock image… Unfortunately, it’s not all sunshine and rainbows over here in Redhawk land. The damned scope rings. Oh, how I hate thee. It’s unfathomable that someone would want to put a scope on a revolver. I mean, would you put a roof rack on a Maserati?

As if their mere existence wasn’t bad enough, they don’t even work right. You can hand tighten the rings to the barrel pretty rigidly (or so it would seem). But, after a dozen dry firings, the rings are loose. Even using a mechanical advantage to suck them down tight…no dice.

Another blemish on the Redhawk’s track record is the God-awfully butt-ugly warning stamped on the side of the barrel. It’s completely unnecessary and quite frankly, I think it’s cruel to tarnish a fine piece of hardware with such an eyesore. Also, I think Ruger sent me the wrong keys for my pretty canary-yellow cable lock. No matter how I twist and turn, the keys will not open that lock. It’s a minor annoyance as I don’t use them anyway, but come on.

Now kiddies, before I get to my favorite part of this handgun, it’s time for a little history lesson. Elmer Keith is a household name around here, but to those who may not be so enlightened, pop a squat.

Elmer Keith was the instrumental figure in developing the .44 Magnum cartridge. In the early 20th century, he was experimenting with very hot .44 Special loads and saw reasonable success big-game hunting with them. But, he wanted more. So he went to Remington and pitched his idea for the cartridge to them. And they ended up agreeing, saying that if Smith & Wesson would design the gun for it, they would design the cartridge.

So off he went to S&W. They agreed as well, assuming Remington developed the cartridge. It took some back and forth, but in 1955 the .44 Remington Magnum and the S&W Model 29 were born. However, if you want to get technical, it was simply the “N-Frame” until the “Model 29” designation was added in ’57.

What does this have to do with my favorite feature? Put simply, hand loading. Because the Redhawk revolver can fire both .44 Special and .44 Magnum, and because both rounds are extremely versatile, this means that handloaders have an obscene number of possibilities for developing loads for this handgun.

One of my favorite handloads is a 200-grain RNFP (round nose, flat point) cast bullet loaded for .44 Special. It produces a modest velocity, in the 700-900 fps range, and it’s an awesome range round. Comparable to a .45 ACP load, you can have fun with these pea shooters all day long. 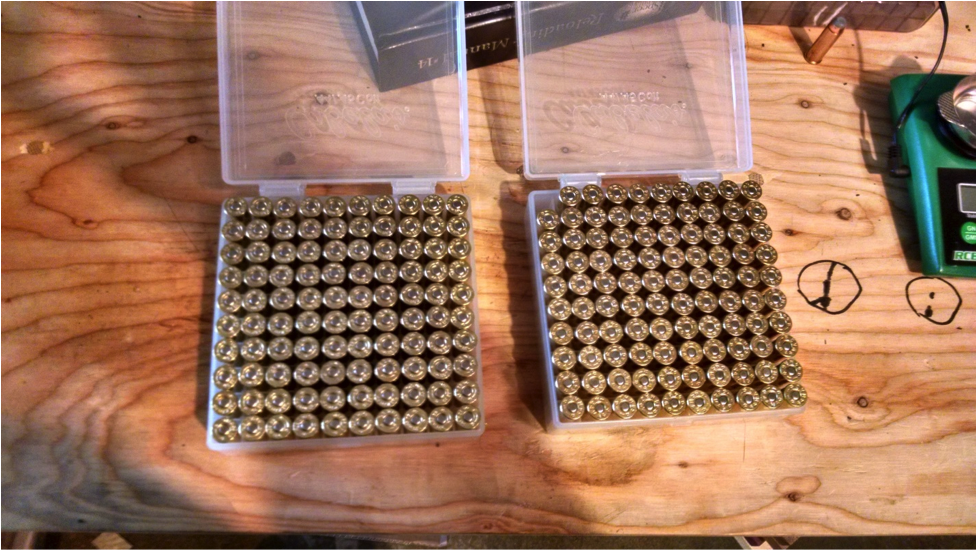 And you can go up, up and away with your reloading. The .44 Magnum has the cojones to tackle any North American game, up to and including the great bears.

I wish I could spend all afternoon extolling the virtues of the Redhawk, but I’m afraid I’d drive away the readership. So to reiterate, it just works. And one need not devote more than a moment to addressing things like reliability; there’s simply no question. Thousands of rounds fired over the years, and it’s never flinched. As far as I’m concerned, there is no better revolver to be had. I love going to the range. Sure, I cringe when I think about the cost of the lead I’m slinging down range, but a few hours of trigger therapy on a crisp spring morning is just about the best way I know to unwind.

One of the things I love about revolvers is the ability to just shoot, and shoot, and shoot. No breaks to reload magazines, or to let barrels cool, or anything like that. I can just set up, settle in, and start hammering away at the poor, unsuspecting paper.

Now, thanks to the 7.5-inch barrel on this behemoth, it’s relatively accurate as far as handguns are concerned. I started out the day by shooting a group of .44 Magnum factory loads off a rest at 25 yards, to try and establish some baseline for accuracy for this review. As you can see, there wasn’t much “accuracy” to be seen… It took me a few minutes before I figured out what was going on. My first inclination was that I was simply pulling the shots (a theory supported by the party members calling me female names and mocking my ability to shoot). However, upon closer inspection, I discovered that somebody had monkeyed with the sights. So, while the size of the group itself is still nothing spectacular, at least I could rest easy knowing that the groups would now (theoretically) be centered around my point of aim.

So, I loaded up with a cylinder full of Specials, and… Wow. This was by far the best free-hand group I’ve ever shot. In full disclosure, I brought the target in to 15 yards for this group, but still. I was half ready to pack it up and leave right then, knowing I wouldn’t be able to outdo myself on this one. For reference, the squares on the target are 1 x 1 inch.

For those of you who’ve never experienced the joy of shooting a mild .44 Special load, you’re missing out. These particular rounds were pushing a 200-grain cast bullet at about 750 feet per second. It’s certainly milder recoiling than standard .45 ACP ball ammo, and in a firearm that weighs twice as much as many .45 auto handguns. They’re a joy to shoot, especially after burning through some of the Magnum loads.

I don’t have a really eloquent way of wrapping up this review, so I’ll leave you with these parting words. If you don’t own a revolver, you should. And if you go out looking for one, I highly recommend considering a Redhawk 44. With its wide ammo versatility, you can get just about any level of performance you could ever need out of this firearm, and have a great time doing it.

Frame: Steel, brushed stainless solid frame with no side plate.

Carrying this 44 magnum revolver is extremely difficult unless you spend the money to set yourself up properly. As far as I’m concerned, belt carry is OUT. Very comfortable to hold and shoot, however the cylinder has a tendency to bite your offhand thumb if you don’t have a proper grip. Extra weight helps tame recoil on hotter loads.

Trigger work and upgraded sights are available, but not required. Also, damn those scope mounts.

It is, to me, the perfect big-bore sidearm. If the scope rings were something I planned on using, I’d have to deduct points here. And sure, it’s harder to carry than your LCR, but what did you expect?