This post is an entry in our SIG SAUER P320 contest.

“Excuse me?” “That’s right, sir. 22 rimfire is the only firearm caliber that is allowed for hunting feral hogs at this time.” As the Game and Fish Commission representative hung up the phone, so began my impossible quest for the best .22 rimfire hunting sidearm I could find to back up my bow in pig country. With the KelTec PMR-30 well known for being constructed entirely of 100% unobtainium, my journey ended with a Ruger New Model Single Six Hunter . . .

The Single Six Hunter has the classic single-action cowboy six-shooter lines but is all business when it comes to critter control. The long 7 1/2″ barrel and integral scope mounts are evidence that Ruger chose the Hunter moniker for good reason. Oh yes, scope rings are included too. My Leupold FX-II fit the included 1″ rings perfectly, but if your scope has a different objective or tube size, Ruger will typically swap the proprietary rings for free.

The frame and cylinders are stainless steel and have a satin finish. The quality of manufacture is very good and I could find no blemishes or sharp edges worth reporting when I first brought it home. Unfortunately, after two years and nearly 500 rounds downrange this working gun shows it. Quit drooling, this photo was was taken before the Great .22 Ammo Drought of 2013-14! 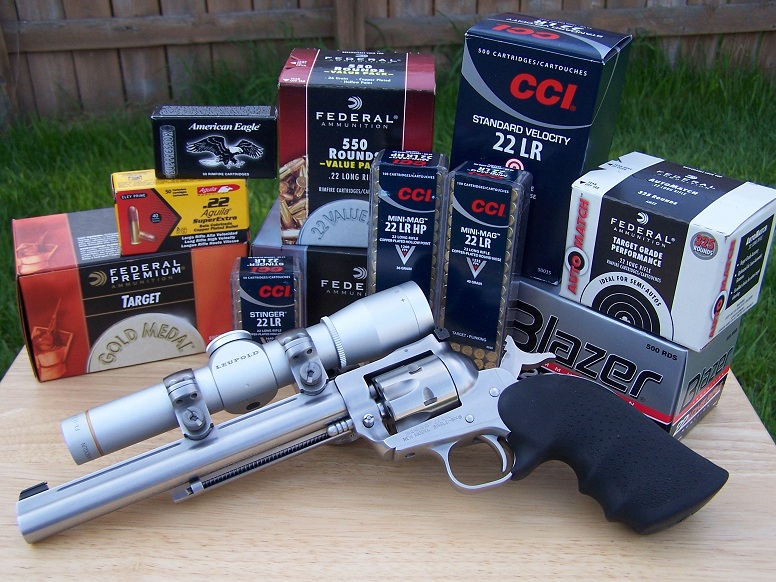 The Single Six Hunter comes with both .22 LR and .22 Magnum cylinders, and each holds six rounds. The gun is loaded and unloaded with the same technique as many single action revolvers: open the loading gate, rotate the cylinder slightly to drop in the first round, rotate to the next chamber and repeat. To remove spent casings and unfired rounds, open the gate, rotate the cylinder to line up with the ejector rod, and slide the ejector rod rearward to dump the cartridges. Repeat for each chamber.

I always carefully check each chamber a couple times more to make absolutely sure there are no remaining rounds, because it is not hard to miss one and there is no other obvious means to indicate a loaded round. This revolver has a transfer bar under the hammer to prevent unintended discharge upon dropping it. It’s not necessary to carry it with an empty cylinder under the firing pin. In addition to the included two cylinders and scope rings, there are a fair amount of aftermarket options available to personalize this firearm to your tastes. The sights can be replaced with Williams adjustable fiber optic sights or other styles. I love the Firesights on my GP-100 for low light conditions and they would be equally useful on this varmint stalker.

Hogue Monogrips are definitely an improvement over the stock laminate grips. Wolff springs and shims are available for the Single Six to fine tune the trigger if you so desire. I have an Uncle Mike’s holster for use when I don’t have the scope mounted and a bandolier style holster when I do. Leather cowboy holsters are also available and are probably a better match for the western motif of this traditional looking piece.

Cleaning the Single Six is fairly straightforward. First unload the cylinder and then remove it. Scrub the chambers and barrel with your favorite solvent and brush. Clean the crevices around the forcing cone as best you can with a brass brush and solvent. The cylinder face can be scrubbed to remove the heavy stuff, but the discolored rings won’t hurt the function any if you decide not to polish them away every time.

Like most revolvers, this gun will still fire reliably even if it isn’t kept spotlessly clean. If enough dirty cough Remington cough rounds are fired between cleanings, the chambers can build up enough crud that you have to lightly press on the round to seat it before rotating to load the next one. However, I never once had a failure to fire.

The first time I took the Single Six along on a range date with my wife, I felt like I was cheating. Just ease the single action hammer back manually with your thumb and squeeze the respectable 4lb. 1oz. trigger. It’s not a crisp break like the custom triggers Nick is fond of, but it’s short and predictable for an off-the-shelf production gun. The long sight radius from the replaceable front bead to the adjustable rear sight made short work of the bullseye at 7 yards. But then I started to fall out of love with this gun.

The grip did not fit my average sized hands well at all. The old cowboy style grip was originally designed to roll up in your hand to help absorb the recoil of a powerful cartridge. On this little .22 it had the opposite effect. Because of the long heavy barrel and small polished wood grip combination, the gun had the urge to roll forward in my hand. The balance just felt way off, and only got worse with the addition of a scope. “But that’s okay”, I thought to myself, “My wife has small hands and it will probably fit her just fine.” Wrong, buck0. She didn’t like it either. Later, I swapped out the laminate grips for some Hogue Monogrips. That helped the situation with finger grooves and better traction on the rubber material, but it was still too front heavy to feel comfortable in my hands. Then the funniest thing happened. As I wrote these words, “there is nothing that can be done to fix the balance on this gun”, the following modification idea hit me. This…actually…works! While moving the scope back doesn’t fix the balance problem entirely, it does make it much more manageable and doesn’t fatigue the hands quite so quickly.

So what kind of punch does my pig pistol pack? I decided to compare its performance against two other popular rimfire small game hunting guns, the Ruger Mark II and Ruger 10/22. To make sure I was comparing apples to oranges, I had the aforementioned 2X scope on the Single Six, a 1X red dot sight on the Mark II, and a 4-12X scope on the 10/22. Who ever said life was fair?

Accuracy was tested in each case using an improvised rest typical of a handy stump or tree one might find in the field for support. The targets were set out at 25 yards to better simulate real game hunting ranges. All .22 LR tests were performed using CCI MiniMag 40 gr ammo, except for the .22 Magnum which used CCI Gamepoint 40 gr jacketed soft points. Six shots were used in each group, mostly because this is a six shooter review after all. The Single Six and Mark II groupings undoubtedly reflect my questionable handgunning skills. The point of impact changed when switching cylinders, so not surprisingly you have to decide which setup you will ultimately dial in. The Single Six did outperform the Mark II in my accuracy test, but the venerable Mark II was much better balanced and comfortable even with a comparable 6 7/8″ barrel. As expected, neither were a match for the vastly superior precision obtained from the ubiquitous Ruger rifle.

I was more interested to see how the velocity of the 40 grain .22 Magnum of the Ruger Hunter stacks up against the 40 grain .22 LR from the longer barreled 10/22.  All velocities are measured in feet per second. I expected barrel length would make a larger difference than it did, but I was pleased to see that the .22 Magnum launched from the Single Six has substantially higher velocity, and therefore more energy, than the same weight .22 LR bullet fired from the 10/22.

Hunting firepower is always subjective to the hunter. Squirrels? No problem. Rabbits? You bet. Raccoons, foxes, bobcats? I would be very comfortable with that. Maybe even something as large as a coyote. Pigs? I’m not so sure.

Because of the higher energy of the .22 Magnum, whatever a .22 LR can kill, the Single Six can kill it deader. But while taking down a small-to-average sized feral hog by hitting the sweet spot behind the ear would certainly be possible, I don’t trust my own skills to get close enough to make that ethical kill shot cleanly on a hog in the wild. And I would have no faith whatsoever in this single action sweetheart to be able to stop a surging swine in those critical seconds after a stray shot. That’s not what Ruger intended it for. This is a gun for small game hunting, and in a survival situation I would be happy to have it to put fresh meat in the campfire stew.

So how did the Single Six Hunter fare on my bowhunting trip you may ask? It sat locked warm and safe in its case, while I invoked the concealed carry provision of the law to bring along my outstanding 6″ GP-100. For self defense purposes only, of course.

Style * * * *
I like how Ruger pulled off the blend of traditional revolver styling with added modern features like integral scope mounts and adjustable sights.

Ergonomics *
I can’t get past how muzzle heavy it is. My wife and son didn’t like it either. Had Ruger put the rear scope mount on the top strap where it belongs, it would be a whole different ballgame.

Reliability * * * * *
Solid primer strikes and no failures whatsoever with all the ammo brands I’ve used.

Customization * * * *
Included cylinders for .22 LR and .22 Magnum. Sights/scopes, grips, spring kits, and holsters are all readily available and interchangeable. What else is there for a revolver?

Overall Rating * * * *
If you’re hunting small game and can’t pack a long gun, the Ruger Single Six Hunter has enough of what it takes to be the next best thing.