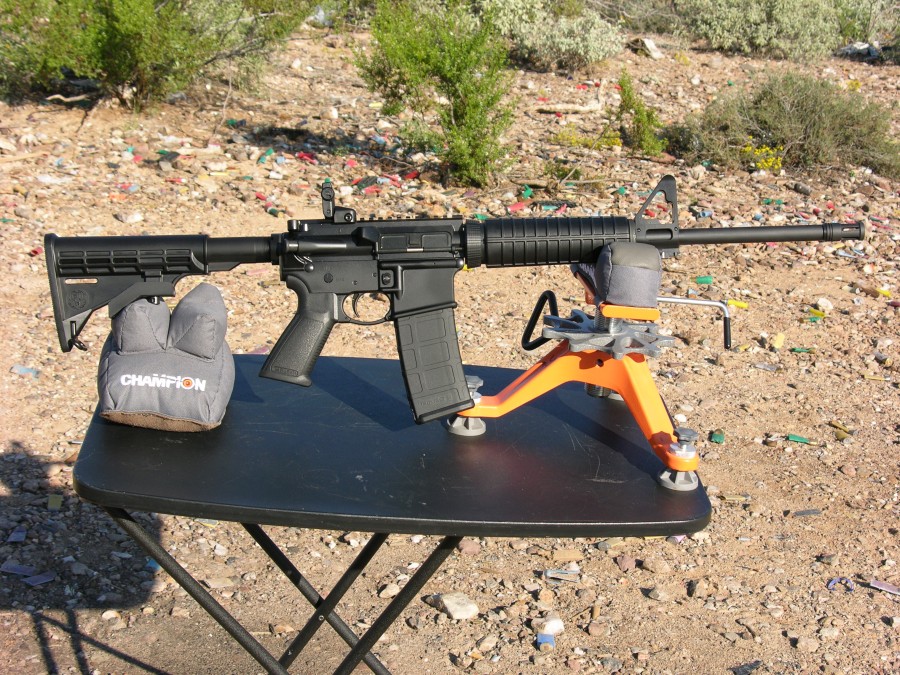 What’s the difference between Ruger’s AR-556 and their SR-556? About 1.5 pounds and $1246.00. Actually, there’s a little more to it than that, mechanically speaking. Ruger has been making their SR-556 and SR-762 rifles for some time, but with the introduction of the AR-556 it looks like they are finally getting into the down-and-dirty business of budget AR-15 production. So what exactly sets their latest creation apart?

The new AR-556 has a gas-impingement system, just like the original AR-15 rifle design. For those who don’t know what that means, in simplified terms, the AR is a gas-operated rifle that used the expanding gasses from the firing sequence to unlock the bolt directly via a tube that passes from under the front sight, to a gas key connection on top of the bolt carrier. Most other gas operated rifles – including Ruger’s SR series – use a gas piston and op-rod to unlock the bolt after firing. The AK, M1, M14, the new M4-A4, and a host of others use a version of that basic mechanism.

Both types have their advantages. The gas piston mechanism results in a much cleaner firing system; all the carbon fouling stays on the end of the piston-more or less. The gas impingement system is like a smog device for your car: all the gunk ends up in the engine, or in this case, the bolt and carrier. It’s a much dirtier arrangement. However, the gas-impingement rifle has much less reciprocating mass, giving it an edge in accuracy.  The piston/op-rod guns have a much heavier mass (relatively speaking) of metal moving before the bullet exits the barrel. Personally, I’m fine with the original design; especially if it’s battle-proven and 100% reliable, and $1200 dollars cheaper to boot. The Ruger AR-556 is a no frills M4-type carbine that has a 1:8 inch twist barrel, which should make all the bloggers happy, since it should stabilize bullet weights up to (at least) 77 grains (and down to 35 grains) in weight. The barrel profile is the semi-heavy version without the cuts for a grenade launcher and it isn’t chrome-lined. The chamber is cut for the 5.56 (and .223) round and utilizes the improved M4 feed ramp for increased reliability. The rifle has the standard M4 post front sight, adjustable for elevation (Ruger supplies the tool). The flash hider is attached via threads. The standard M4 type hand guards are well-shaped and tight fitting; nothing rattles around, and they are a bit smaller (and more comfortable) than the usual M4 jobs. The upper receiver has a forward assist and an optics rail. There is also Ruger’s own flip-up (or fold-down) rear sight, which is adjustable for windage via a thumb screw. The lower Receiver is pretty standard with it six-position stock and military trigger. The trigger broke at eight pounds and was better than most out-of-the-box military M4 rifles I’ve tried. The hand grip was not standard M4; it was much better shaped, fitting my hand like the proverbial glove, and providing just the right distance to the trigger…for me anyway. The entire rifle is finished in a black oxide. By the way, there’s no front sling swivel, but there is an attachment point for one as well as a bayonet, bipod, or other device. I started out trying to sight in the rifle at fifty yards using the factory sights. Luckily for me, the rifle was pretty dead-on right out of the box. The trouble began when I kept trying to get a nice group for a picture for this article. My eyes just are not up to the task. Oh, I can hit three-dimensional soda cans at eighty yards with the AR-556 using its iron sights, but trying to group five shots on a two-dimensional target just seems to be an exercise in futility for me. After plinking away 100 rounds or so, I noticed I was down on ammo, so I took the Burris scope off of my Bushmaster Carbon-15 and mounted it on the Ruger. I was able to shoot a respectable group at 50 yards using my remaining ammo: Hornady’s 75 grain 5.56 BTHP load. No attempt was made to zero the sights. I just fired the group as-is and while it was high and to the right, it wasn’t embarrassing. The Ruger AR-556 handled all the different loads I had on hand with 100% reliability. It’s well-balanced and handled beautifully. Functioning was as smooth as a custom M4. It even deposited the fired cases in a neat pile about six feet to the right/rear of the shooter. Just as good as a Bushmaster or Smith & Wesson, it comes in with a more suitable 1:8 twist for shooting the 75-77 grain bullets that are gaining in popularity. While I wish Ruger had used a fold-down front sight, the Ruger AR-556 is a keeper.

Ergonomics:* * * * *
It handles like an M4. The pistol grip is shaped perfectly, for me anyway. The trigger broke cleanly.

Reliability: * * * * *
No feeding or ejection problems of any kind with either rifle or magazine.

Value: * * * * *
An entry-level AR carbine should be reasonably priced. This one is.

Sights: * * * *
The rear sight is plastic and might not stand up to hard use. ALL M4 type carbines need a fold-down front sight for a clean sight picture when using 1X optics.

Barrel: * * * * 1/2
PLUS for its 1:8 Twist; MINUS for not being chrome-lined. With 5.56 ammo all being non-corrosive, a chrome-lined barrel is probably not really necessary.