Like a lot of people in this country, my first rifle was a Ruger 10/22. And as Bill Ruger himself planned, thanks to the first rifle, my second rifle was also a Ruger, a M77 Mark II. In the years since that second Ruger found its way into my safe, the company has revamped their bolt action lineup. Taking a cue from the market at large, they’ve focused on building accurate rifles with great triggers on a budget. I recently had the chance to test out Ruger’s latest entry to the market, the American Rifle Predator, chambered in 6.5 Creedmoor. After a few boxes of premium ammo, I ended up pleasantly confused . . . As I mentioned in my preview, the overall finish on the Predator is a little rough. Where the finish on my M77 MK II was smooth and free of defects, the American Rifle has clear machining marks on the receiver and bolt, and really anywhere you bother to go looking for them. Not exactly a deal breaker, but I work hard for my money, and I like seeing smooth finishes on my new guns. But this is a budget gun and budget guns don’t typically look pretty.

Let’s discuss that budget part shall we? Ruger sets the MSRP at $499 for this little gem. Several online retailers list it for less than four bills, some of them down under $375 at the time of this writing. But let’s call it $400 for round numbers. Here’s what you get for your $400.

You get a cold hammer forged barrel with a three lug, seventy degree throw bolt. You get a rail along the top for mounting optics. You get a threaded barrel. You get a detachable magazine. You get an adjustable trigger. It’s an impressive feature set considering that any one of those items might add $100+ to add to an existing rifle. On paper, this is quite the list of “must haves.” There’s a darker side at work, though. While that bolt has a short(ish) throw, there’s some grit and a little play. Not the end of the world of course, and somewhat par for the course, but it’s worth noting that this isn’t the precision rifle you’ve been jonesing for. That rail along the top is not a standard Picatinny rail. It has several enlarged areas that mess up the spacing of the slots. The one in the middle appears to be there for no other reason that to prominently feature Ruger’s logo. The others give the hex screws that hold the rail in place some purchase. This locks the end user into using a two-piece mount. Again, not the end of the world, but some of us have one-piece bases we really like. The barrel is threaded 5/8″-24, the standard for most .30 cal silencers and muzzle brakes. The threads are fairly clean and I had no trouble screwing a can to the end. The problem is that the twenty-two inch barrel is not stiff enough to support the weight of all but the lightest silencers on the market. With Nick’s Liberty Chaotic in place, I saw POI deviation of roughly eight inches in elevation at 100 yards. And that number was subject to change as the barrel heated and cooled.

You get a detachable magazine with the Predator…just one though. And it only holds four rounds. And buying a few extras will set you back $39.95 each. For that sort of money, you could save up a bit more and buy an AICS magazine. Or wait until Magpul releases their PMAG AICS mag which is slated to retail for $34.95. None of those will do you any good in this rifle, though as the Predator takes proprietary magazines. All that said, the magazine is stout, it holds the rounds as it needs to, and effortlessly feeds them into the chamber. 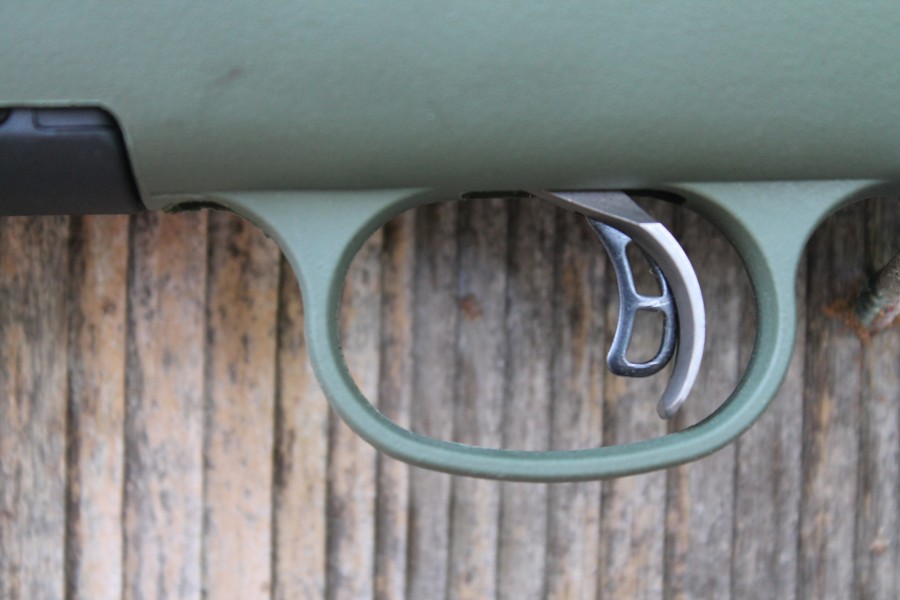 Last on that list was the trigger. And honestly, I have no gripes. It is far superior to the majority of factory triggers, and sits even with the feel of a Savage AccuTrigger for sure. I was able to successfully adjust it in the range that Ruger advertises, and it broke clean and crisp every time I asked it to. Is it as good as a Timney? Absolutely not, but it’s also housed in a sub $400 gun. You really can’t ask for a better trigger in the price range.

My biggest gripe with the American Rifle Predator is the stock. Normally, I’d just complain about the comb height and be done with it. And for the record, the comb height on this gun sucks. Why a manufacturer ship guns out the door with a stock comb designed for iron sights on a gun without iron sights will be forever be one of the great mysteries of the universe. This is especially perplexing as my Ruger American Rimfire has interchangeable height combs. Someone at Ruger clearly recognizes the problem, but that person hasn’t knocked on the centerfire guys’ door yet.

That’s actually not the most frustrating thing though. The most frustrating thing about the stock is how much it flexes. With a Harris bipod out front dug into the dirt or somehow blocked from forward movement, you can flex the entire stock loading the bipod. I fought and cursed and shook my tiny fists at the sky as I tried valiantly to shoot this rifle accurately from a bipod. Any loading of the bipod amplifies the smallest movements and sets up an annoying vibration that is truly maddening. I did my very best to quell it, but the vibration is like nothing I’ve ever seen. Breathing, your heartbeat, and minor shifts of the tectonic plates will set it to wiggling, and good luck trying to stop her once she starts.

Resorting to sandbags, it becomes immediately apparent that the slim forend, great for shooting offhand, is far too slim for bags. With a big optic mounted — which makes the gun top-heavy — it wants to list to starboard or port.

Despite all that, though… It became blindingly obvious early on that the Predator is a shooter. Above is the best group I was able to lay down, but five-shot sub MOA groups are well within the realm of possibility for this gun. It likes the 120 gr. and 140 gr. A-Max Hornady loads the best, though. I also tried out Winchester 140 gr. ammo and found it to be only meh-worthy in terms of accuracy. That didn’t stop me from getting the gun glove melting hot (ask me how I know), and putting five rounds of the aforementioned Winchester ammo in the torso region of a steel IPSC target at 465 yards. Ten inches of spread just so happens to be the approximate size of the vitals on a white-tail deer according to Chuck Hawks so I figure that something closer to 400 yards is about the edge of effective accuracy for that round through this rifle. Which is too bad because at that range, the ultra slick 6.5mm bullet is still cruising along at about 2000 fps. It needs to be out closer to 800 yards to slow down below 1500 fps.

None of the bullets tested with the exception of the GMX are considered hunting bullets so I’d never advocate shooting a game animal with a match bullet. That said, you could poke a pretty decent hole in something with a 140 gr. bullet at 1500 fps. Hornady says the GMX needs a minimum of 2000 fps to open properly which puts the effective range from this gun at right around 500 yards according to my ballistic calculator. Not half bad for a budget rifle with moderate recoil and relatively affordable quality ammunition. Below is the data I was able to collect on all of the ammunition I tested. Seeing those types of groups made my heart hurt. I wanted…needed…this rifle to suck. With the fit and finish being almost on par with Soviet era manufacturing and the flimsy, ergonomically displeasing stock, I thought for sure that it would be a turd. But it’s an honest to God, real life, bonafide shooter. It isn’t fun or even comfortable to shoot, but damn if it doesn’t git ‘er done. Ruger seems to have stumbled upon Savage’s successful formula of building cheap shooters and cruising full speed ahead.

Here’s the thing, though. This gun gave me fits because it’s mechanically accurate, but hard to shoot accurately. Lock into a bench shooting from bags, and you can make this gun shoot. But take it out into the field off a bipod or try to use an improvised rest, and you’ll fight it the whole way. When you spend a lot of money on a rifle, you’re often paying for a gun that will work with you instead of against you. Those guns can be put in the hands of neophytes and they’ll look like Chris Kyle. This is not that gun.

The Predator forces you to work to put rounds where you want them downrange. Instead of Ruger spending the money on an upgraded stock — which would fix 70% of the issues I have with the Predator — the money was spent on fancy doodads like barrel threading, detachable magazines, and slotted rails for optics. None of those were particularly well executed either. So what you end up with is a $400 gun that you know has the mechanical accuracy to justify ergonomic upgrades, but any dollars spent will be always be framed as a percentage of the total cost. Fit, Finish, Build Quality * *
It’s rough all over and then some. The controls work well, but there’s no finesse, no class, no panache. The parts that are important accuracy are stout, the rest of them are barely there.

Customization * *
It has a threaded barrel and sling swivels. There’d be three stars if it had a true Picatinny rail along the top.

Ergonomics * *
Two stars for the forend covering the barrel and having the relevant parts where they need to be. Unfortunately, the stock comb is too low, and there’s way too much flex in the stock. Get this thing up on a bipod and it bounces like a rubber band. Try to put it on some bags and the pleasant-to-the-hand forend will roll on you. This is a gun built like a lightweight stalking gun chambered in a cartridge meant to be shot at things far away from a sturdy rest. I finally broke down and drilled the stock so I could install a cheek riser.

Accuracy * * * * *
Simply stunning — $400 for five-shot 1 MOA groups? You gotta be kidding me. This is easily the highest accuracy per dollar gun I’ve ever shot.

Overall Rating * * * *
Ultimately, I felt like I was shooting the gun version of a Dodge Neon SRT-4. You’ll recognize that as the car that made you exclaim, “THEY’LL PUT A WING ON ANYTHING!” It had a turbo and handled pretty well and cost about $20,000. But at the end of the day it was still a Dodge Neon. Everyone kept saying that they couldn’t fault a car that fast that only cost $20,000. But they also had to say, “It is still a Neon.”

The same applies to the Ruger American Predator. Spending another penny improving it would be foolish. Just shoot the damn thing. But know that the comb will be too low, it’ll wiggle like the girls in a Snoop video, and with Hornady’s ammo, it’ll punch sub MOA holes with regularity.