After nearly a year of playing with these two pistols, it’s fair to say this review is way overdue. On the plus side, I’ve managed to put a lot of rounds through both of these double-stack 1911s (a.k.a., 2011s) from Rock Island Armory and have shot them in the heat of summer, in deep snow and driving rain. Despite the round count, weather conditions and a complete lack of any cleaning or lubrication since they arrived last summer, they’re still running strong. They’re accurate, reliable, and fast. Each of these pistols comes with two magazines, owner’s manual, warranty card, fired cases and sight adjustment tool. In these frames, both 10mm and .40 S&W use identical 16-round magazines. 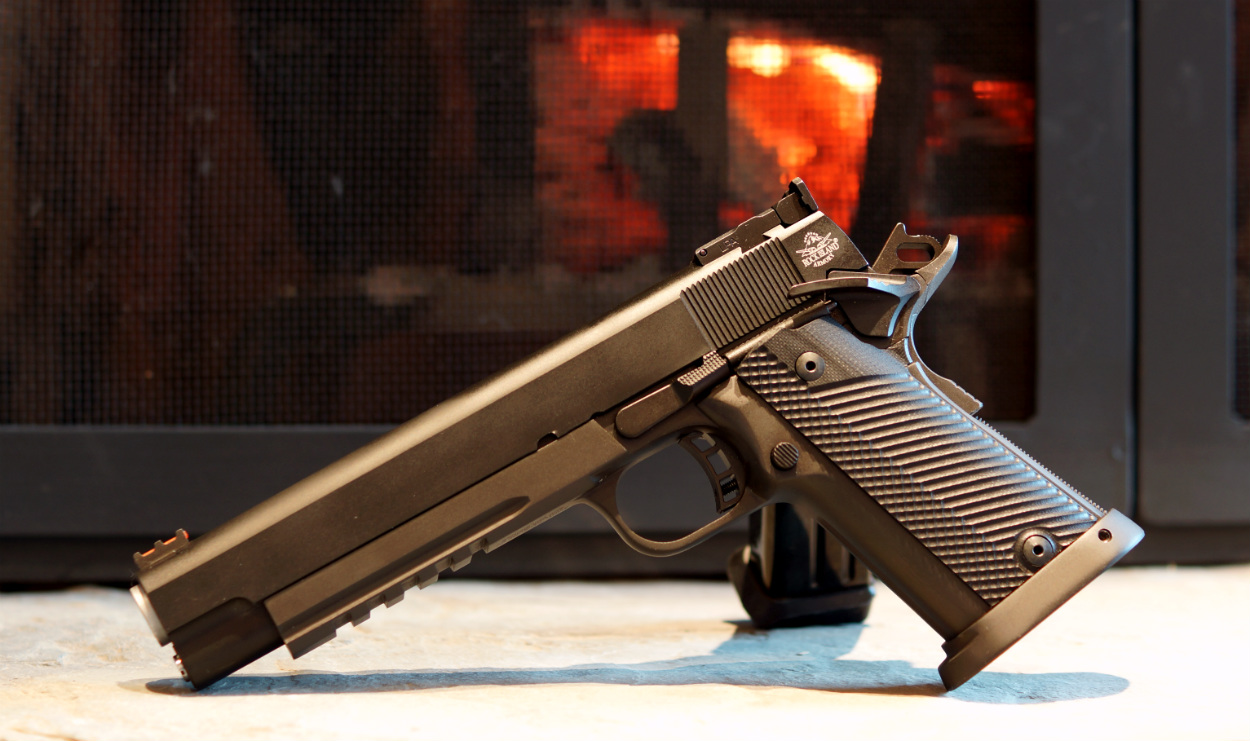 The 10mm is the PRO Match Ultra 6″ HC 10mm. As you’d guess from the name, it sports a 6″ barrel, which squeezes some additional velocity out of the powerhouse cartridge.

A steel, double-stack frame is a pretty wide affair. RIA keeps its 2011s from feeling too much like bricks by maintaining nice curves and by using wafer-thin G10 grip panels. The .40 is fully checkered on both the frontstrap and backstrap, while the 10mm is checkered on the backstrap and sports vertical serrations on the front. The .40 is perhaps more competition-oriented, which may explain why it sports a rail-free dust cover. On the 10mm side, there’s no shortage of rail estate with five slots to choose from. In both cases, that weight over the nose noticeably reduces muzzle flip and felt recoil. Rear sights are fully-adjustable units from LPA and are dovetailed in a low-mount slide cut. 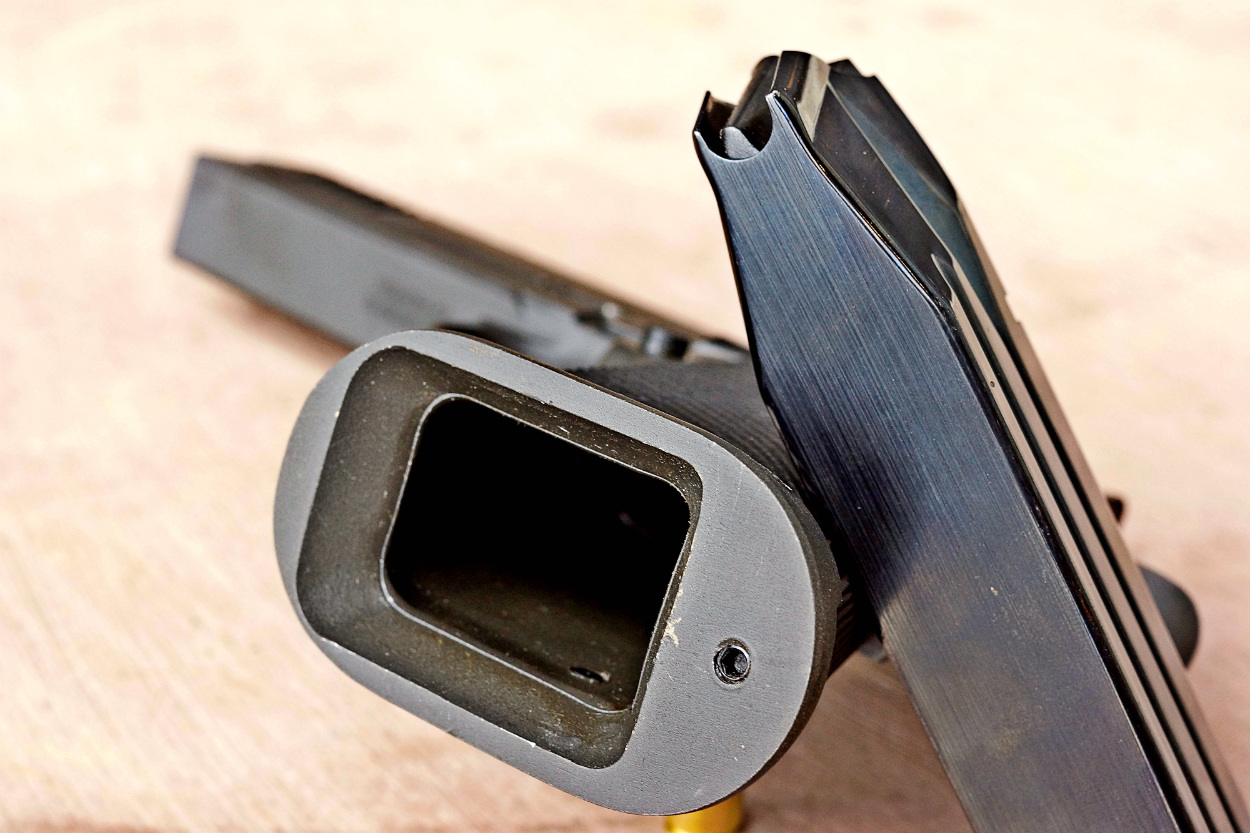 And they both have giant magazine well funnels. Combined with the pronounced taper at the top of the double stack mags, it’s darn hard to miss. Dropping the mags, however, is a bit harder than inserting them. The fat frame can make fully depressing the mag release somewhat of a trick, especially if you have smaller hands. An oversized release that extends towards the grip panel would make dropping mags faster and easier without necessitating any shift in grip. Shooters with huge hands probably won’t have this issue, but it’s a mild stretch for my men’s size L glove-wearing hands.

The curved, serrated, skeletonized trigger is adjustable for overtravel. There’s a short amount of takeup before stopping against the sear on both pistols. They’re then both practically creep-free before a clean break. RIA states a break weight between 4 and 6 lbs for both of these models, which is a somewhat wide margin of error. My two guns measure nearly in that range with the .40 breaking at 3.75 lbs and the 10mm just over 5 lbs. Bushingless bull barrels lock up snugly in both slides. 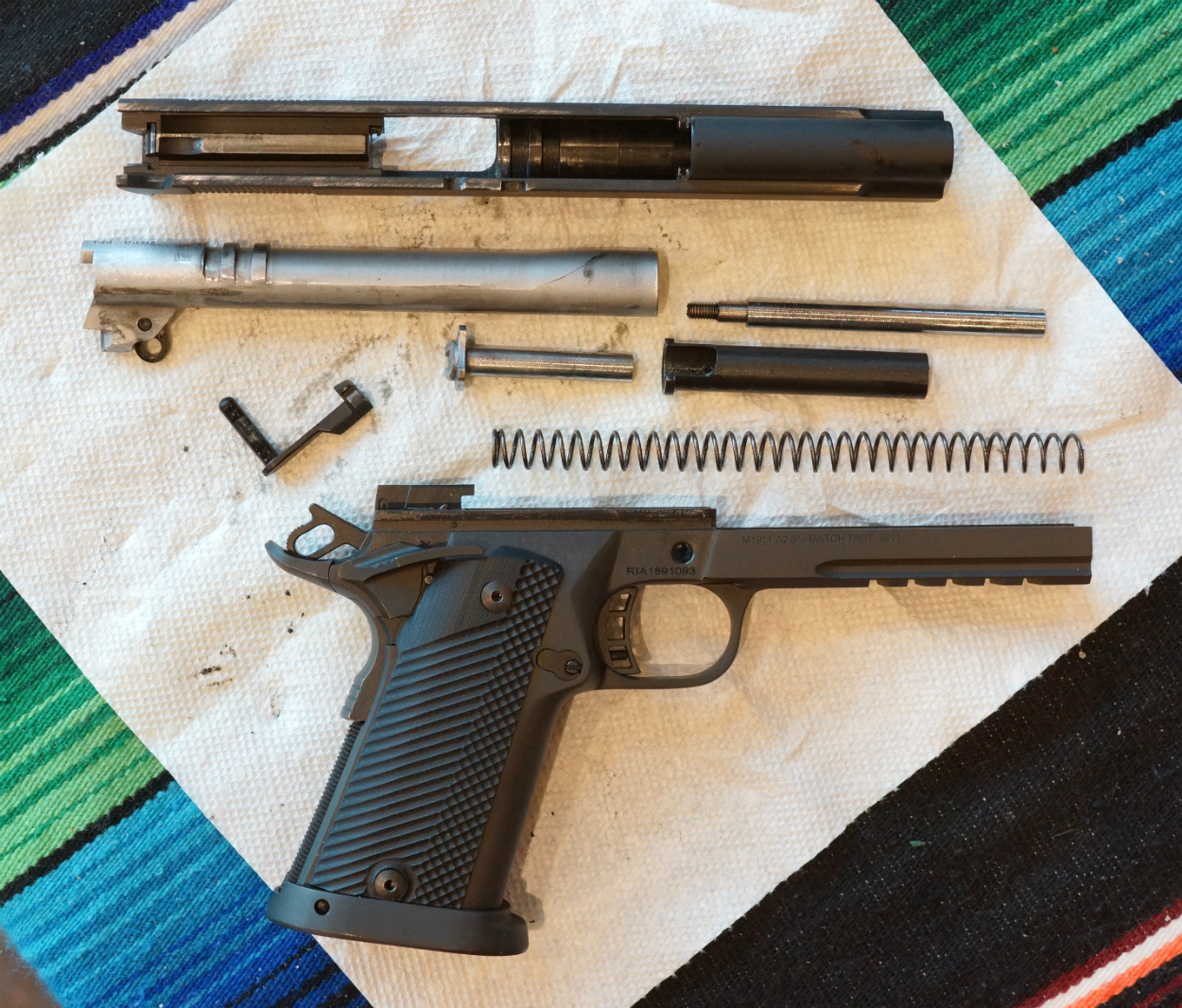 Parts fit is decent — better than what the budget-priced 1911 haters will assure you you’ll get from a Rock Island. Tolerances between slide and frame rails, beavertail grip safety and frame and grip panels and frame are looser than you’d get on a high-end gun. Fancier machinery, reducing tool life, and manual fitting all takes time and, more importantly, money. Fit where it really counts — barrel hood, lugs, and bull nose into their respective places in the slide — is surprisingly good. It’s clean, snug, and consistent on both guns.

Cast slides and frames are parkerized. It isn’t the nicest looking finish out there, but it works. RIA has also done a good job with the finish’s consistency. I’ve seen a lot of parkerizing with varying gloss levels and color tones in different areas of individual parts. Other than my fingerprints and splotches of gun lube, these pistols don’t have that issue.

On top of the weight — especially that at the muzzle end — the wide backstrap spreads the already-diminished recoil across a generous swath of palm. These are definitely two of the softest-shooting pistols for their caliber that I’ve shot.

On the downside, they’re fat! It feels good in the hand but, as mentioned earlier, I can’t operate the magazine release without shifting my grip, which slowed me down on competition stages. The slide lock is completely out of reach for my strong hand thumb unless I rotate the pistol in my grip fairly severely.

Actual grip width is about 1.35″, which is only 0.17″ thicker than a GLOCK 17’s grip, but it’s very noticeable. Some of that is down to the gun’s controls, designed for a single stack 1911. Wth the grip panels on these RIAs, that would measure about 1.050″ across the grip. In short, the controls aren’t exactly where they should be or sized as they should be. 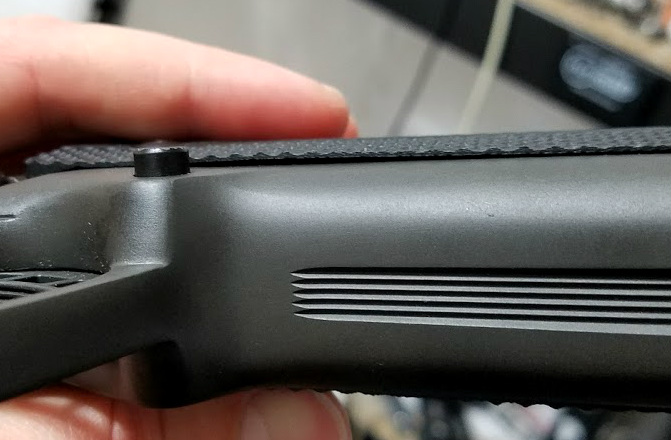 As I much as I like G10 grips, the ones on these pistols are pushing the limits of how thin one can go with the material. They flex a bit, and the front edges aren’t perfectly flush with the frame (gap measures ~0.033″). While shooting I can feel the left side front edge flexing under my fingertips as it springs back against my efforts to squeeze it down against the frame.

For shooters with large hands, though, the ergonomic issues of a metal frame, double stack 2011 are diminished, and you’re left with a couple of truly sweet shooting guns. I was very fast and accurate with both of these RIA’s, and it’s hard for me to choose one over the other.

The longer sight radius of the 10mm scored me a couple of flawless A-zone-only runs on a competition stage, while the reduced muzzle flip and slightly cleaner, definitely lighter trigger of the .40 made me faster. In fact, the first rounds I put through the 10mm were on a competition stage — I scored in the top third of competitors for that run — and the first shots through the .40 cleaned up in the AutoTargets review (video). They’re both a heck of a lot of fun to shoot. Rested accuracy proved pretty good. With a handful of groups downrange from each pistol at 25 yards, the 10mm was ever so slightly better on average. Again I attribute that to the longer sight radius. I think it would have pulled out a more noticeable lead if its trigger were as nice as the .40’s. In practical use on the range, shooting freehand and while on the move, the nice sight setup made both RIA’s extremely accurate.

A year later and many hundreds of rounds through both guns, including Underwood and some other hot loads through the 10mm, and I have yet to see a single stoppage or glitch of any sort. I shot the guns in the snow, in the rain, in the sun in triple-digit temps; and on hot, dusty days. I haven’t cleaned or lubed them, and they’re still running great. It’s about time to add some lube, but I’m impressed with the reliability of both of these pistols.

Rock Island Armory is known as a particularly affordable 1911 brand. There are some aspects to the guns’  fit and finish that don’t stack up with more expensive alternatives. For instance, the shape of the ambi thumb safeties leaves a bit to be desired with their sharp edges and corners, the parkerized finish is functional, but only average to look at, and the grip panels exhibit some gaps on the frame. Naturally some of those gripes are easy to fix. Regardless, right out of the box, these pistols are competition- and/or hunting-ready. They’re reliable, accurate, and fast. Not to mention a ton of fun to shoot. At the RIA price point, they’re a good value, considering that many of the 2011 alternatives cost well over twice the price.

Accuracy: * * * * *
While I’ve definitely had greater success with other pistols off a sandbag rest, that isn’t as important to me as practical accuracy. On the range these RIA’s are dead on.

Ergonomics: * *
Thanks to the extremely slim grips I found these pistols comfortable to hold. They weren’t too big for my hands for shooting purposes, and control and confidence were great. However, the magazine release and slide stop were out of usable reach for my strong side thumb (again, proper fit in men’s size L gloves, so not exactly midget hands) without shifting my grip. I like the feel of the safety detent, but found the safety levers themselves to be a bit sharp.

Reliability: * * * * *
Ran multiple brands of ammo in every weather condition right out of the box, and kept on trucking without cleaning or lubrication.

Customize This: * * * *
It’s a 2011, but most of the parts are still 1911. Controls, fire control parts, grip panels, sights, and more can be swapped out easily. The double stack frame shouldn’t affect holster fit, but the extended dust cover/rail and long slide will.

Concealed Carry: *
Short of a Desert Eagle there aren’t a whole heck of a lot of pistols options that put you in larger or heavier territory. The 10mm is just shy of four pounds fully loaded with 180 grain ammo, and tips the scales at 4.041 lbs with 17 rounds of 220 grain slugs.

Overall: * * * *
At a competitive retail price of about $850, the PRO Match Ultra .40 in particular offers solid value for what is really a competition-ready pistol right out of the box. I’d likely slap an oversized magazine release on it and call it a day. While fit and finish aren’t near premium levels, these guns shoot like champs and I was just as fast and accurate with them as I am with many pistols at double or even triple the price range. They’ve been totally reliable, too.