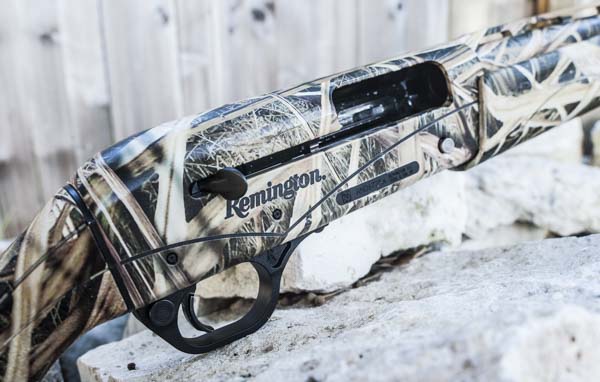 If your father took the leap and bought one of those new-fangled auto-loading shotguns, there’s a good chance he bagged rabbits, busted clays, killed turkeys or downed ducks with an elegant Remington 1100 or the more workmanlike (but versatile) Remington 11-87. Big Green still sells both guns, in large numbers, for good reason. They remain useful, reliable and affordable firearms. Yes, but . . .

Today’s shotgun-buying public demands both innovation and evolution. Over time, European shotgun makers (with names that begin with B) have elbowed their way onto store shelves and into shooters’ hearts with innovative, ultra-reliable designs. Faced with quality competition and a loss of market share, Remington went back to work. Rather than using the usual array of springs, gaskets or other doohickies to regulate the gas pressure for various sized loads, the Versaport system “decides” how much gas to feed back into the system based on the shell’s length. Longer shells obscure some of the ports as they produce more gas to cycle the gun. Shorter, softer-shooting, less powerful loads expose more ports and — voila! — more gas is bled into the system to help cycle the action. Bonus! The dual piston Versaport design also moves the gas system from its usual spot down the barrel back towards the receiver. With more of the gun’s mass moved aft, the shotgun’s center of balance is directly under the front edge of the receiver. That means a lighter feeling, more easy-swinging shotgun.

Speaking of more, the 3 1/2-inch chambered Versa Max cost and weighed more than many shooters wanted or needed. Hence Remmy’s introduction of the Versaport-equipped V3. It’s slimmer and almost a full pound lighter than the 11-87, costs less than the Versa Max and offers a more popular three-inch chambering. In fact, the V3’s just as light and more affordable as many of its foreign-made, inertia-driven, harder-kicking competitors. Our test gun came finished in Mossy Oak Blade. It’s also available in Like We Never Loved at All (i.e. Break-Up Country) or basic black, for a Benjamin less. While it’s tough to see above, the receiver’s been drilled and tapped for mounting an optic. While Remington’s recent history was rife with quality control issues, the V3’s extremely well put together. Solid. OK, some may quibble with the plastic trigger guard, but that’s the price you don’t pay for affordability. And while the What Hurts the Most pattern makes “spot the tool mark” harder than finding Waldo in a Waldo clone factory, I found a couple. The V3 features front and rear studs for your sling-mounting pleasure. The V3’s magazine tube cut-off is a handy safety feature for hunters, should they find the need to hop a fence or climb into a tree stand with a loaded gun. If you have a full mag tube, raise the lifter slightly and slide the magazine cut-off forward. That blocks the magazine and allows you to rack the action and eject a chambered round without loading another shell. Lock the action open and you’re good to traverse your obstacle safely. The trigger provides a clean break somewhere in the 4 1/2-pound neighborhood. And quite a nice neighborhood it is too. After nearly 500 rounds of ammo — ranging from light one-ounce skeet loads to heavy three-inch steel waterfowl and lead turkey rounds — the V3 took a lickin’ and kept on tickin’. It ran everything I threw at it and begged for more, without so much as a look at a cleaning brush or a sniff of CLP.

The V3’s rated at 7 1/4 pounds (mine weighed in at two ounces more). What’s a couple of ounces between friends? The V3’s light enough to tote all day in the field and swings on target like a big-*ss BB gun. Better still, the Versaport system and the Remington Super Cell butt pad make the V3 one of the softest shooting gas guns you’ll ever shoulder. Follow-up shots are fast and instinctive.

While Remington says it has no plans to discontinue the venerable 11-87, it’s hard to see both models staying in the Big Green lineup long term. The V3 is the superior shotgun. It’s a light, reliable, soft-recoiling three-inch smoothbore for sport shooters and hunters who want to pay south of a grand, but want a modern design that’s built to compete with the best the foreign gun makers have to offer.

Fit and Finish: * * * *
Surprisingly good. Or maybe that’s my prejudice showing. Only a couple of visible tool marks. The Mossy Oak Blade camo finish held up well despite me dropping the receiver.

Value: * * * *
Remington’s marketing campaign for the gun proclaims, “The finest autoloading shotguns in the world aren’t made in Italy, Belgium or Japan. They’re built right here.” By those standards, the V3 is a bargain: $600-$700 less than comparable Browning, Beretta or Benelli guns. Weatherby (SA-08) and Mossberg (930) can compete on features and price, but the V3’s gas system is a step above.

Customize This: *
Not really. You could swap out the front sight if you’d rather have fiber optic, but that’s about it.

Overall: * * * * *
Remington V3 challenges a plethora of well-established, highly-respected competition —  and doesn’t lose. This is a full-featured, soft-shooting, reliable, semi-automatic shotgun at an affordable price point. Which should make it easy to go green.