Several years ago, I found myself in need of a shotgun. A former roommate had decided he wanted my 16-gauge Remington 870 bad enough that he was willing to disappear with it. With whitetail season looming, I began to hunt for a trustworthy replacement. During my search, I came across a used 12-gauge Remington Model 887 Nitromag (hereby referred to as the “M887”) at my LGS. The proprietor explained that the M887 was “very similar to the 870.” The 870 that I sorely missed had never given me problems, so I was willing to give this polymer-bedecked offering from Big Green a test drive. What really sets it apart, however, is the proprietary “ArmorLokt” polymer coating, which Remington applied to the surface of the metal receiver and barrel. This was done to protect the firearm from the ever-encroaching rust gremlins that feast on exposed metal surfaces. The primary incentive for the M887 is a firearm that can withstand activities that vie to get your powder soggy, such as duck hunting. 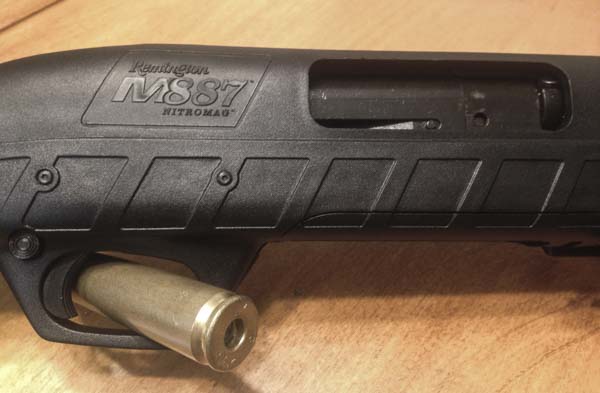 Remington’s “armor-clad warrior” is rugged and is touted to withstand cruel and unusual punishment. Remington claims the ArmorLokt finish is impenetrable, and to back those claims they’ve done in-house torture testing. The first test involved submerging the gun in salt-water solutions to check for leaks or separation in the polymer. There were no leaks or separations found, which dismayed the rust goblins considerably. The in-house engineers then fired over 10,000 rounds through a single M887 barrel to discover whether the coating would separate due to heat and stress. There were no separations found.

Remington managed to maintain the same shade of “synthetic black” across the entire firearm, spanning the polymer and rubber in equally scary fashion. Advantage MAX-4 HD camouflage options are available for purchase, such as “Waterfowl”, “Bone Collector” and “Turkey”.

Sling swivel studs are built into the stock. The stock melds smoothly into the receiver, which then transitions smoothly into the barrel, but the overall appearance causes me to surmise that Remington had a one-night stand with Michelin. There are raised polymer contours on the barrel and slide that cause the eye to stutter as it pans across the firearm. The ridges ensure that the operational operator can maintain a firm grip whilst operating but the end result looks not unlike a truck tire’s tread. There are some similarities to Remington’s venerable 870, due partially to the popularity of the 870 lineup and partially to Remington’s laziness and hesitation at redesigning the wheel. The core design of the two guns are shared, namely the action, receiver, and barrel. Even though the design of the M887 leans heavily on its highly-praised ancestor, Remington claims the guns are “significantly different” and does not intend for the M887 to be a replacement for the 870.

A standout difference between the two models is the M887’s use of a dual-lug rotating bolt head, whereas the 870 uses a single lifting lug to lock the action. A metal dust cover slides on pins built into the bolt assembly. 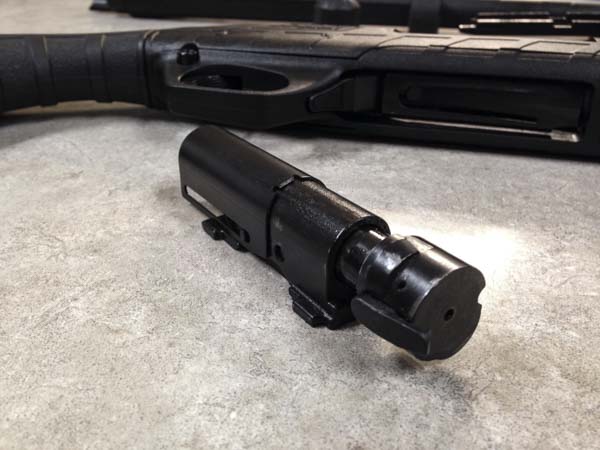 Another welcome change is the slide release. In contrast to the 870’s slide release that is activated by a small metal tab, the M887’s release is a large, user-friendly button located on the front of the trigger guard. 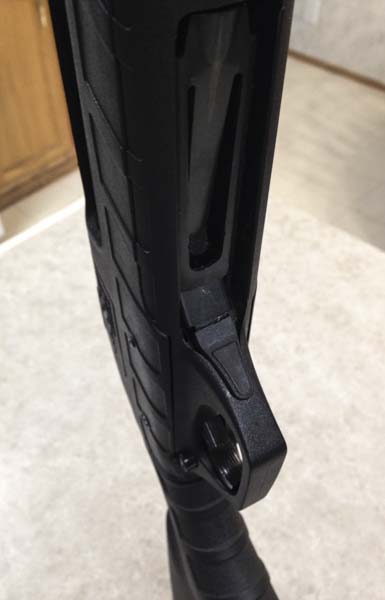 The M887 claims to be easier than the 870 to strip down and clean but I’ve found the process on both guns to be very similar and hassle-free. For a polymer-coated firearm colored “Scare the Liberals Black”, there is a surprising absence of Picatinny rails. Rails can be found on the Remington 887 Nitro Mag Tactical model, but not the synthetic model. If you purchase the synthetic model, you’ll have to secure your tactical flashlight, laser, rangefinder, and TV remote on the barrel with an aftermarket clamp or roll of duct tape.

The M887’s polymer coating gives the gun a slightly bulkier feeling than its svelte 7.25 lbs would convey. The fore-end has a built-in swell that fits the hand nicely, although the flared chunk of plastic feels slightly loose and cheap. 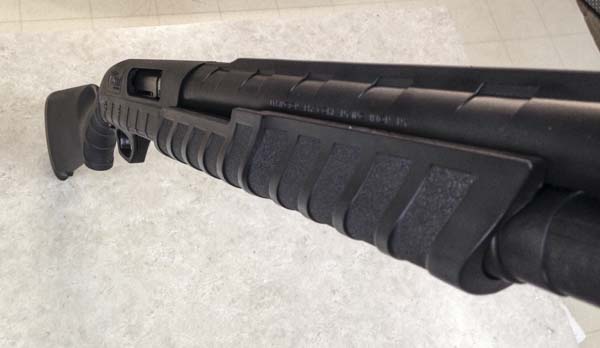 Regardless of the overall paunchy feeling, the shotgun is quick to point where you want it to and will speedily transform a box of clay birds into powder. Well, it will when run by anyone but me. My friends, siblings, and wife have little trouble hitting targets and clays with the gun, while I struggle more with connecting the M887’s payloads to their intended destinations than with any other shotgun. Perhaps I’m distracted by the two high-vis sight beads; a red one located midway down the barrel and a lime green one located at the very end of the barrel.

I’d like to blame the gun for the sake of my reputation as a steady shot, but I suspect that it’s user error. 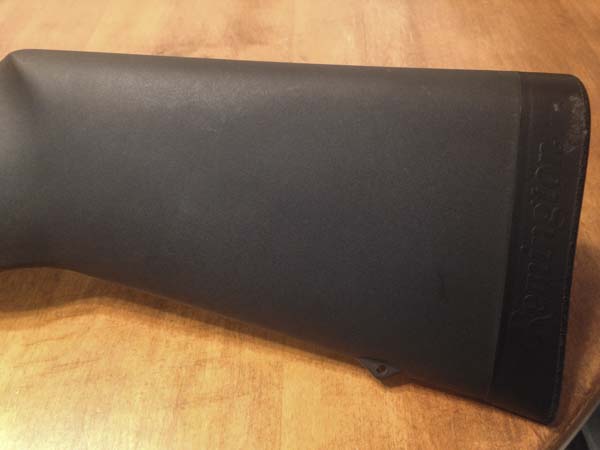 The gun’s cushy butt-pad manages recoil well, but you’ll find your wallet and shoulder suffering more acutely if you start feeding 3 ½”shells through the M887.

Magnum rounds are punishingly brutal on the shoulder, but the gun handles them like a champ. In contrast, a brother-in-law’s Remington Versa Max bitterly complained when we used 3 ½” rounds through it. The shotgun ended up shearing the extractor off in protest. [Insert rant about Remington’s spotty reliability records as of late here.]

The M887’s not-quite-as-smooth-as-an-870 action cycles through shells reliably, even when loading and firing mixed ammunition. I placed a 2¾” round, a 3” round, and a 3½” round in the loading tube and pounded them out without any feeding or cycling trouble. I’ve run hundreds of rounds through this shotgun in the past few years and it has not choked, stove-piped, double-fed, or caused any fuss, so long as the pump is stroked fully and with authority.

The trigger is decent for a shotgun, but not exceptional. There’s some brief stacking right before a clean break, right at the 4 lb. mark. The trigger resets with a crisp click and you’re back in business, provided you pump another round into the chamber.

Those familiar with the push-button safety found on Remington 870’s will be right at home with the safety on the M887. It’s one of my lesser-favorite safety button setups but it gets the job done. 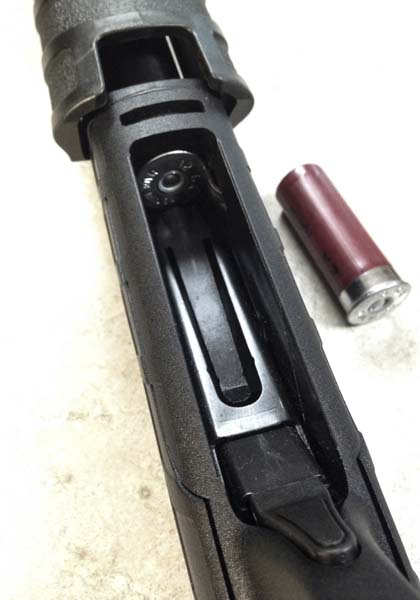 A nice feature is the loading tube feed ramp, which tucks up into the gun’s chamber while you load rounds. This is a standard feature on most shotguns but Remington 870 feed ramps like to spring down and gouge your thumbnail while you load.

After the M887’s release in 2009, many initial reviews of the shotgun claimed that this would bring Remington into the 21st century with a firearm that rivaled the Benelli Nova and the Mossberg 835. There were grandiose claims by media, gun forums and reviewers that this new scattergun would replace the 870 as the pre-eminent shotgun offered by Remington. In 2011, upon receiving the NRA Golden Bullseye award for the M887, Remington claimed it was “the most durable shotgun on the planet”. According to the rave reviews, this firearm should be found in every coat closet, gun rack, and duck blind in the nation. But in reality the M887 had a mediocre run and was discontinued in 2015. One particularly large death knell for this boomstick was the fairly extensive recall on shotguns suffering from a binding firing pin. The official release stated the following:

Remington has determined that in some Remington Model 887™ shotguns manufactured between December 1, 2013 and November 24, 2014 the firing pin may bind in the forward position within the bolt, which can result in an unintentional discharge when chambering a live round. This may occur when the safety mechanism is on. Any unintended discharge has the potential to cause injury or death. Therefore, Remington is voluntarily recalling ALL potentially affected products to inspect and repair. Due to the risk of unintended discharge, the instruction to owners of affected shotguns is to stop using it immediately.

Remington offered a handy tutorial on their website which detailed how to check the firearm’s serial number to see if your particular M887 was affected. My serial was not among the problem guns, since it was manufactured before the recall period. The fault was not to blame on the design of the M887, but rather some shoddy components. That’s never happened in a Remington product before, has it?

Accuracy: * * *
This gun just doesn’t run accurately for me, but I seem to be the odd one out. It just doesn’t feel instinctive like other shotguns do.

Ergonomics: * * * * *
The recoil pad is soft and comfortable, the controls are all within reach and are easy to manipulate even while wearing gloves.

Reliability: * * * *
I took a star away due to the critical safety recall that affected hundreds of M887’s, but my personal M887 has functioned flawlessly.

Customization: * * * *
It is more difficult to find accessories for the M887 than it is to find them for the 870, but they’re still out there. There are different sight options available, as well as different tacti-cool stocks offered by ATI. The M887 uses the standard RemChoke system in their barrels. Further customizations desired? The M887 Tactical version comes with an extended magazine tube, Picatinny rails, and one of those extra fearsome ‘coming-to-a-ban-near-you’ muzzle breaching devices.

Overall: * * * *
This is a decent firearm and you can find them for cheap, mainly because they’re completely dwarfed by the legacy of their brother, the 870. The M887 will do what you ask it to and will keep the rust gnomes at bay. Before purchasing, check Remington’s website to see if the gun requires repair under the firing pin recall.