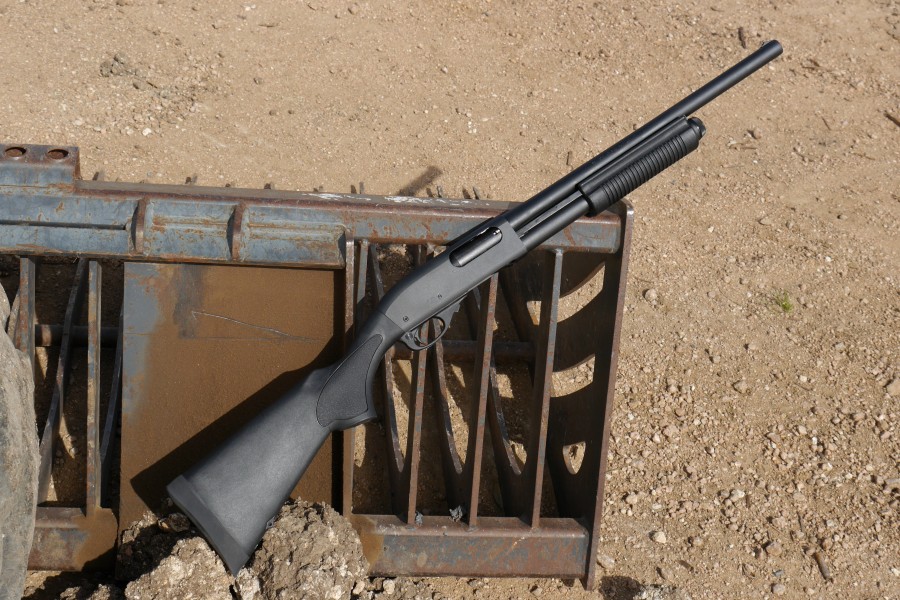 The Remington 870 shotgun. If anyone can think of a more iconic scattergun let me know, because I’m pretty sure this is the tops. Star of stage and screen and gracing the gun safe of just about every gun owner in the United States, it’s a familiar sight on the range and in the field.

Somehow, though, we here at TTAG have never reviewed the gun before. So seeing the opportunity to fill a hole in our repertoire, as well as an opportunity to find out if Freedom Group had managed to ruin yet another iconic American firearm, we bought one from an online retailer and tested it out.

This model is the least expensive version we could find, figuring that if there are any cracks starting to show in the old girl, they’d be most apparent in the lower-end varieties. But for $350, you still get some nice features. The latest incarnation of the 870 uses the same style stock as the newer Remington 700 rifles. Most of the stock is the standard slick black plastic, but there are some panels fitted into the gun around the grip area that are made of a squishy, grippy rubber material that give the shooter a much more secure hold on the gun.

Also included is a rubber recoil absorbing butt pad, which is damn near required when shooting a shotgun this light — the gun weighs only a hair over seven pounds. At the top of the stock Remington has crafted in a good-sized comb that gives the shooter a solid cheek rest when aiming the gun, rounding out the fine design of the rear section of the firearm. Out front, Remington seems to have skimped a little. The forend of the scattergun is a minimalist design, using a rough textured plastic as the sole ingredient. It fits with the price tag and the overall style of the gun though, so I’m not complaining. While the stock and forend might not seem to be of the highest quality, there’s no doubt that the action itself is  up there with what we’ve been seeing for ages. The blued steel of the receiver and bolt both feel silky smooth, and I can’t find any signs of errant tool marks or rough patches. It’s the same Rem 870 we’ve come to know and love, and it feels as solid as ever.

Then, when you put the gun up against some competition, and you start to realize just how good you have it. Compared to a Mossberg 500, for example, the gun is head-and-shoulders above the competition. When you rack the 870, the gun feels solid and well-built. When racking the Mossy 500, it feels like it’s about to come apart. While the finish and design on the 870 is sleek and solid, the 500 has some exposed mechanics and a strange slotted lifter design that I just don’t like. Other things come down to personal preference, like my partiality for the Remington’s cross bar safety as opposed to the Mossberg tang-mounted safety. But overall, the Remington is still a clear winner.

The only thing I could find that wasn’t up to spec was on the trigger guard of the Remington 870. It looks like the old metal trigger guard has been replaced with a new plastic version, and there was some leftover material behind the trigger that I could easily remove with a pocket knife and a few minutes of concentration. While it may not sound like much, it’s the only issue I found on the entire gun. Out on the range I put hundreds of rounds of birdshot, buckshot and slugs through the gun without a single problem — and never lubed it once. I just assembled it straight out of the box and started stuffing shells up its pipe. The gun never malfunctioned, never hung up, and always ejected properly.

To be fair, we aren’t done testing this shotgun. Our 870 and a Mossberg 500 purchased at the same time, with the same round count on it, are currently lightly salted and sitting in a field somewhere in Texas. Probably being stepped on repeatedly by horses if I know the herd at the ranch as well as I think I do. In a few weeks we’ll transfer them to the bottom of a lake for a while, drop them from an airplane, and then blow them up. And then we’ll see if they still work. But until that testing is complete, I can say without a doubt that under “normal” conditions the gun runs just fine. There’s no doubt that the Remington 870 is still the king of the pump action shotgun. Even after all of these years and management changes, it still feels and works just as well as its predecessors. And for the money, it’s the best shotgun you can get.

Ergonomics: * * * *
The forend could use some of those softer grippy panels, but otherwise he 870 is a downright comfortable scattergun.

Reliability: * * * * *
Lubed or not, it runs just fine. Give us a couple more months and we’ll prove it even more definitively.

Customization: * * * * *
Everyone and their brother makes accessories for the gun.