With President Obama’s election a few years back and the Great Assault Weapon Scare of 2012, there was a ton of demand for AR-15 rifles. The shortage eventually got to the point where it started making economic sense for companies to make plastic receivers instead of taking all that time to mill out an aluminum forging. But with the use of plastic instead of aluminum, you lose some of the rigidity and strength that made the firearm usable. Enter the hybrid lower receiver, where a small block of metal is molded into the receiver itself to strengthen it. Some companies have done this well. Unfortunately, ATI is not one of them . . .

The concept behind the “hybrid” design is to strengthen the weakest part of the AR’s receiver: the rear, where the buffer tube screws into place. This one little section is subject to the highest strain in the entire gun, since this small flap of material needs to keep everything in line as the bolt carrier group is slammed into the buffer and reciprocates as the action cycles.

And speaking of small parts, the threads that hold the buffer tube in place can easily get stripped with enough use. As Cody Wilson found out when he was building his 3D-printed lower receivers, this one area is the easiest to crack or damage if you’re using sub-standard materials. So rather than relying only on the plastic to keep everything together, ATI slipped a small block of metal into that area to reinforce the pillar. Not too long ago we reviewed another polymer hybrid AR-15, one from MEAN Arms. Their aluminum block had two pins holding it in place and keeping it from rotating (the takedown pin and the safety selector) and was chunky enough to beat someone to death with. ATI’s metal insert has only one pin to keep it from flexing, and the attachment point for the receiver extension isn’t even as hefty as an original AR-15’s. The effect is pretty obvious. Just looking at it, the fit and finish on the rifle is pretty hit-and-miss. The upper and lower receiver halves don’t match up even in the slightest, and the area where the metal insert is molded into the gun has errant bits of plastic in it. Elsewhere on the gun you can tell that it’s meant for “budget conscious” individuals — all of the parts are from either bottom shelf or at least of mediocre design. The forend is a non-free floating quad rail, which looks and feels bulky. The stock and grip are typical “budget” M4-style parts. And the trigger has no break, it just rolls very heavily straight to the sear with no warning.

But there are some things I like about the receiver design, too. 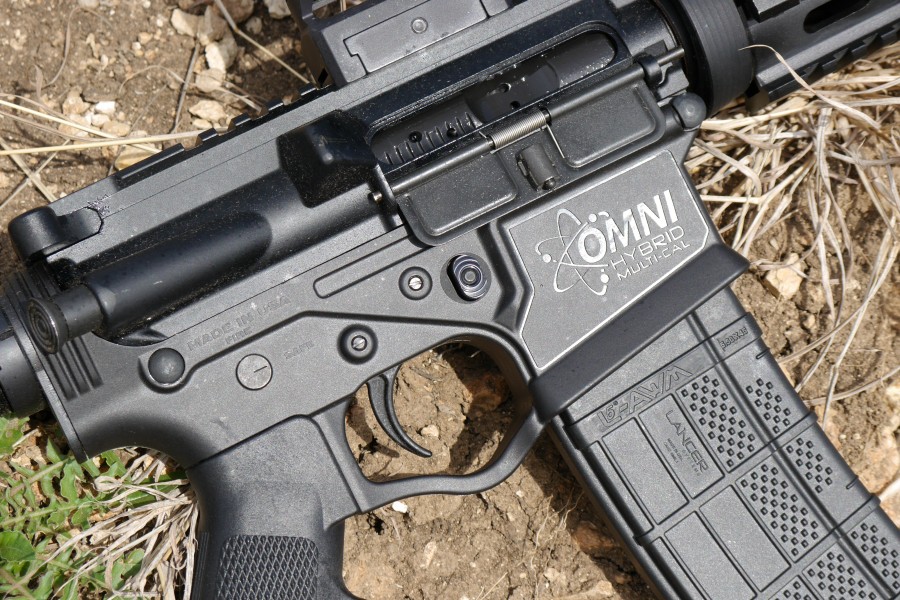 The trigger guard is molded into the rest of the gun, and flared nicely to allow even the chubbiest of sausage-like digits to get at the bangswitch. The magazine well is flared just enough to be helpful, but not enough to be annoying. And the overall appearance of the lower receiver is a nice design, something different from the typical AR-15 to be sure.

Out on the range, though, things went bad. Straight out of the box, the gun didn’t work right. Every rifle I’ve tested, from the PWS Mk114 right down to the JR Carbine, can run for at least a few magazines without additional lubrication. ATI’s Omni, on the other hand, failed to cycle a single round. The gun would fire, but the bolt carrier would never get far enough back to load a new cartridge. Even with a “normal” amount of lubrication — the same level I give all my other “known good” guns — the rifle wouldn’t cycle. It was only when the rifle was absolutely dripping wet with lube to the point that it was leaking around the charging handle and down my hand that it would cycle somewhat reliably.

Unfortunately while we have a GoPro video camera, the slow motion feature wasn’t sufficient to pick up on the reason why the gun needs so much lube, but I have a theory. The Omni’s metal insert seems designed simply to reinforce the threads in the buffer tube and not much more. There’s still quite a bit of plastic used as structural components in that area of the gun, and plastic has a tendency to stretch and deform under pressure.

I get the feeling that as the gun is firing, the recoil impulse is causing the gun to buckle upwards at the buffer tube pillar, pinching the bolt carrier as it passes from the upper receiver into the buffer tube. This pinching adds friction, which slows the bolt carrier and keeps it from cycling properly. The fact that adding lube to the mix fixes the issue seems to confirm my suspicions, and the massive build-up of lube in that area of the gun helps too. Something that The Firearm Blog reported and I can confirm is that the gun also doesn’t want to lock back after the last round is fired from a magazine. The bolt catch on the gun tends to rotate out of position and slip behind the follower instead of being raised by it, possibly caused by the mag well being out of spec. Magazines tended to wiggle in the ATI Omni more than other firearms, so while they seated firmly and properly and were held in place well, they moved back and forth quite a bit under recoil. On the range, the best the gun can muster (even using match grade 55gr rounds from Hornady) is about 3.5 MoA. The reason for the inaccuracy is some combination of the terrible trigger, a “meh” barrel, and a non-free-floating rail. Take your pick, really.

The ATI Omni is a budget rifle designed for penny-pinching shooters, but it fails to impress in almost every regard. It doesn’t function, it feels crappy, and it shoots at best “minute of pie plate.” For my money, I’d suggest that you avoid this gun and go with something like the S&W M&P15 Sport. That’s the $650-ish AR-15 our man Ben Shotzberger gave a five star rating back in the day. It’s still the one to beat at the lower end of the cost spectrum in my book. If you have a few more dollars, the Mossberg MMR is about $700 on the street and has all of the same features as this model of the ATI Omni — rail included. Or, if you really want a hybrid AR-15, go for the MEAN Arms rifle.

Accuracy: *
It hit the target. That’s about the best thing I can say about the accuracy.

Ergonomics: *
The handguards are chunky and uncomfortable, the stock is very 1990’s, and the charging handle is far too small for the amount of force you need to crack the action open.

Reliability: *
The gun only runs when it is completely drenched in lube, like Paris Hilton washing a car for a Carl’s Jr. commercial drenched. And even then it won’t always lock open after the last round is fired.

Customization: * * * *
There’s a lot of rail space and most of the parts are still standard and swappable with any other AR-15.

Overall: *
ATI makes some great stuff, but this is not one of their better offerings.