Polymer AR-15 rifles aren’t anything new. Heck, you can print one out at home if you really have the urge. But while they may be “old hat” at this point, you can definitely see the appeal of a lightweight rifle — especially since pounds equal pain in any shooting environment. Historically they all suffer from the same set of issues, and generally they aren’t very good. But one company, MEAN Arms, has just started shipping their first hybrid polymer design, a rifle promised to be as strong or even possibly stronger than aluminum AR-15 but as light as a polymer rifle, and we here at TTAG were given the very first production rifle off the line to test out. The downfall of most polymer lower receiver designs is that they have a tendency to snap in half right near the buffer tube. That area of the lower receiver is the thinnest, and yet has to handle the most stress as the gun fires. Cody Wilson figured that out when he was doing his testing for 3D printed AR-15 lowers, and as a result most have a significantly reinforced rear section. The guys over at MEAN figured that they could reinforce that area better by inserting an aluminum block there instead, and they’ve done it in such a way that you’d never know it was there. The guys at MEAN have actually been in the manufacturing business since the 1960s (under a different name), making parts for the aerospace industry. As a result they’ve gotten very good at machining aluminum and molding things in polymer, so when the AR-15 bubble happened last year and there were no guns to be had anywhere, they decided to make their own doing what they do best. The MEAN Hybrid-15 is the result, and I have to say that I’m very impressed.

The polymer design does indeed reduce the weight — the rifle weighs in at a svelte 6.186 pounds, and the lower alone is 0.34 pounds — but the real benefit according to MEAN is the elasticity and the ability to quickly customize the lower.

Under stress, plastic can bend and then return to its original position without breaking or deforming. Aluminum doesn’t do that, it just deforms or snaps. They believe that these properties make their rifle more durable than a standard aluminum AR-15, and to prove it they include a comprehensive transferable lifetime warranty. If at any time during the gun’s lifetime something breaks, they’ll fix it — no questions asked.

Customizing the rifle down the road is another benefit to polymer. All of the markings on the gun are made using metal inserts that they place in the mold, so doing a special run with something like a custom rollmark or some cool new design is quick and easy. It should make it cheap and simple to order up a set of rifles with a group name or logo. The fit and finish on this firearm is top notch, with no rough edges or blemishes that I could find. On top of that, all of the parts function crisply and feel proper. Take for example the safety selector switch. On some rifles, it feels like you’re sliding a piece of penne pasta around. With the MEAN Hybrid-15, the safety snaps firmly and crisply from “safe” to “fire.” It’s the same with the rest of the controls as well.

Speaking of the fit and finish, this is the “MOE” version of the rifle which means that it comes decked out in Magpul’s finest frippery. Which ain’t a bad thing at all, since I’m a fan of Magpul’s style. It seems to me like the lower receiver is in the same style of tactical chic as the furniture, which looks pretty bad ass as a package.

The only thing that was slightly odd was that the lower receiver flares out near the top, but I’m guessing that there’s a reason. The guys said originally that they want to make both the upper and lower receiver out of the polymer material, but for this run the upper is a standard A4 style aluminum upper. My bet is that the lower is designed to marry up to the polymer upper, which will be released later. To accommodate that flare the rear takedown pin area is recessed into the lower, allowing you to use a standard takedown pin. Since the lower receiver is molded polymer, the guys at MEAN can take some liberties with the design. For example, the magazine well on the rifle is flared a little bit more than usual to give you a bigger target when inserting a new magazine, but not to the point of being obnoxious. And the trigger guard is molded right into the lower, eliminating the need to buy that piece or deal with the cheap crappy triggerguard that comes with the standard parts kit.

One touch that I especially liked were the safety markings. I’m a big fan of the “bullets / no bullets” pictorial markings, since those are universal and seem to make more sense to me, and the addition of the third position on the markings is nice just from an asthetic standpoint. The rifles being offered for sale are manufactured to accept only semi-auto AR-15 parts and don’t have the requisite hole for the auto sear so position #3 will probably never actually be used, but I like having it anyway. 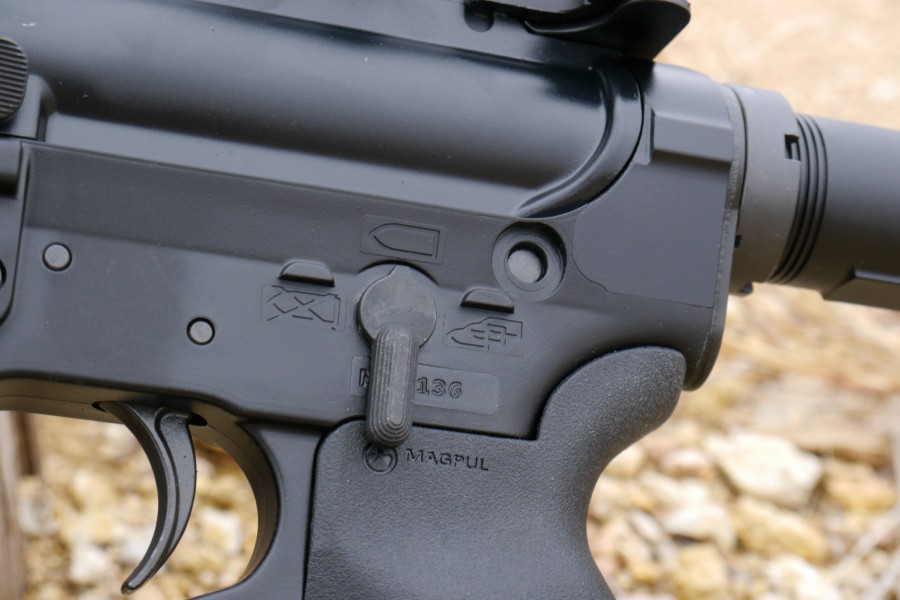 The only other problem I have with this gun is also pictured here: the trigger. The guys at MEAN went with a standard “milspec” trigger, which means it’s terrible. Creep? Overtravel? Long reset? Yep, all present. It’s disappointing, since in every other way this gun is fantastic. Out on the range, the rifle handles like a dream. Not only does it feel as solid as a standard AR-15, but it definitely feels lighter. It actually feels a lot lighter than even my 11″ SBR. That means that you can run the gun just as hard as any all-metal rifle, but you won’t be as tired from lugging your gun around all day. I tried my best to break the gun through normal wear and tear, but it just wouldn’t give in. You know, bashing the buttstock on the ground, dropping it a couple times, dumping multiple magazines through it without a break — normal wear and tear. Or as I call it “the Thursday morning range trip.”

The only issue is that the barrel on this gun is a full M4 “government” profile barrel, meaning it is (relatively speaking) extremely heavy. I was expecting a pencil profile barrel for a gun like this, but after seeing the results of the accuracy testing I can’t argue with the results. 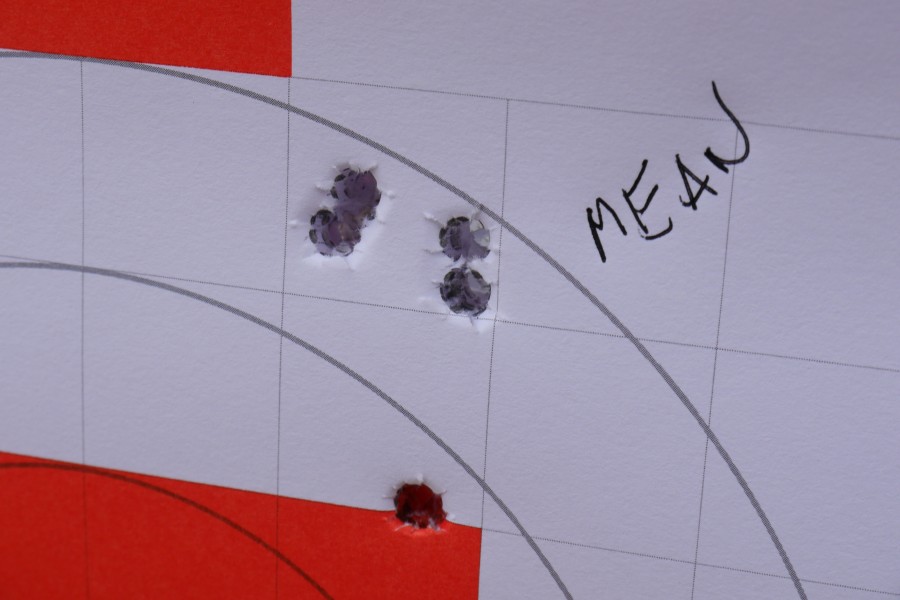 As always, this 5 round group was fired at 100 yards. But since there’s no way to mount a bipod, it was done off a set of sandbags instead. Using Remington match grade 77gr ammunition I was able to get the above group, and I’m going to take full responsibility for that round I pulled low. The trigger on this gun isn’t exactly match grade and things went a bit wrong, but with a better trigger and possibly a bipod I could see this being a 1/2 MoA gun.

The results aren’t surprising, considering the source of the barrels. MEAN uses the much prized cold hammer forged barrels from FNH USA in their rifle, which is a smart move for the rookie company. I’ve seen how those barrels are made and have used them in competition all year long, and I trust them even after thousands of rounds of ammunition downrange.

As it stands it’s definitely a sub-MoA rifle at the least, which is damn impressive from a first time rifle manufacturer when even Bushmaster can’t get that right. Things I’d like to see in the next edition? A pencil profile barrel for one. Ditch the front sight post, slim down the barrel profile and maybe even put some fluting on that sucker — anything to drop the weight even further. A better trigger would be a nice improvement as well, something in a single stage variety. Anything but what it has now.

Despite the issues I have to admit that I am thoroughly impressed with the rifle. It’s a solid firearm that functions almost perfectly, and performs admirably in the field. What impresses me even more: the price. The gun is set to retail for about $1,200. It’s about 50% over the price of Bushmaster’s polymer offering, but in my opinion it’s worth every penny. The gun is lightweight, rugged, and accurate — exactly the qualities you’d want from a good carbine. And the fact that you’ll be buying from a small family-owned business is just the icing on the cake.

Accuracy: * * * * *
Sub-MoA without any modifications, but capable of much more if properly configured.

Ergonomics: * * * *
Like the Diet Coke of the AR-15 rifle. Trim off some more weight and it will be perfect.

Customization: * * * *
While it’s an AR-15, the custom lower receiver does tend to slim down the options available.

Overall Rating: * * * *
An excellent first offering from a brand new company, and doing something that can actually be called “new.”