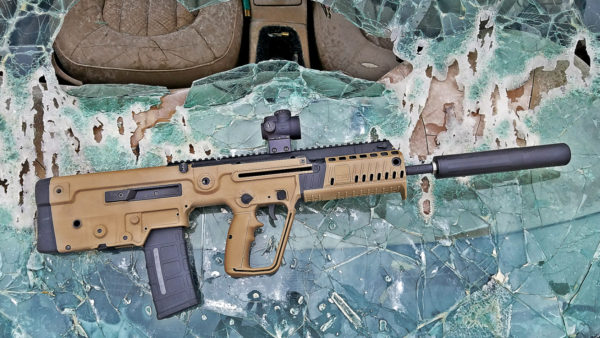 From the moment the Israeli-made Tavor hit our shores, it was a major hit. Why not wield a fantastically compact rifle — meeting the NFA’s minimum overall length restriction by a hair’s breadth — for home defense, treason prevention, and zombie hunting? The trigger was a bit of a bother, but the IWI Tavor X95 improved that. And now it’s available chambered in the versatile 300 Blackout . . . The 300 BLK was designed to be shot suppressed. With full powder charges and light-for-caliber (110 to 147 grain) projectiles, it’s a .30 caliber cartridge capable of hitting ~2,400 fps while fitting in standard AR-15-size systems.

With heavy-for-caliber (typically 208 or 220 grain) projectiles and a reduced powder charge of, typically, a quick-burning pistol type of gunpowder, 300 BLK is an extremely quiet, subsonic round that achieves full velocity in as short as an eight-inch barrel. Advancements in projectile designs have lead to reliably-expanding, capable hunting and self-defense rounds even at these lower (~1,050 fps) velocities. It can be a challenge, though, to get a semi-automatic gun to properly cycle both the powerful supersonic and much lighter-loaded subsonic ammunition. Thankfully, the X95 in 300 BLK utilizes an adjustable gas block on its long stroke piston system. A simple 180° rotation of the adjustment screw switches the system from low gas for supersonic (one dot facing the shooting) or high gas for subsonic (two dots facing the shooter). 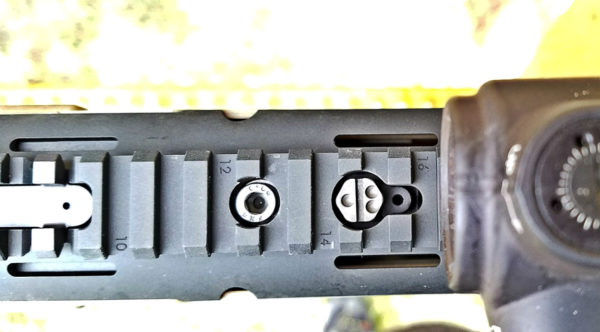 With my Dead Air Sandman Ti silencer on the muzzle, I ran the X95 with the gas block on “supersonic” (low gas) the entire time. The suppressor’s extra backpressure helped the X95 cycle reliably even with subsonic ammo.

Both subs and supers cycled with the gas on high, too. But the extra blowback was obvious and there’s no reason to beat the gun up when it runs just fine on the lower setting. 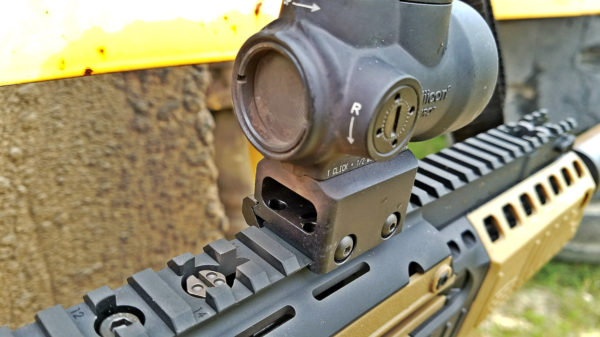 When I realized I had accidentally blocked the gas adjustment with my Trijicon MRO, I moved it on up. Unfortunately locating an optic right in front of the gas block is ill-advised, as the block jettisons a decent puff of ammo combustion gases with every shot. After just a few magazines I could barely see through the MRO.

The mount, back of the optic, and rear lens were coated in a layer of carbon and other crap. While it wiped off easily, mounting your optic behind the gas block (the gas primarily jets forwards) or directly on top of it (gas would vent out the side slots in the receiver) are better options. 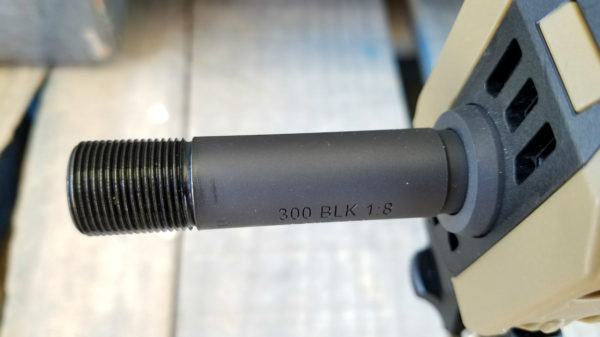 An adjustable gas block is a huge “plus” for any 300 BLK, especially one that’s shot suppressed as it should be. So I was shocked and chagrined — miffed, even — to find a complete and total lack of any semblance of a shoulder on the cold hammer forged, chrome-lined barrel. Heck, I’ve seen snakes with bigger shoulders than this. A suppressor (or any muzzle device that you like) cannot be mounted as-is. It will literally pass right by the shoulder and won’t stop threading on until its threads smash into the unthreaded part of the barrel. This is all but guaranteed to booger-up your suppressor’s threads. The solution: use the provided jam nut. Either tighten it right into the barrel as punitive retribution for the X95’s conspicuously missing shoulder, or tighten it and the suppressor into each other, effectively locking both in place. Basically, the jam nut is now the barrel shoulder.

It’s perfectly effective and worked flawlessly over hundreds of rounds, including removing and re-installing the suppressor a few times across different range outings. But it isn’t a clean installation — it stacks tolerances — and that shiny stainless steel nut stands out like a sore thumb. On the flip side, if you run a muzzle brake on the X95 instead of a suppressor — which would make you very strange indeed — the lock nut makes timing a muzzle brake quick and easy. I dig the easily-removable rail cover panels on the X95’s handguard — one on each side plus one on the bottom. It’s a perfectly judged design that’s comfortable when a rail isn’t needed, but provides immediate access when it is. The bottom panel conveniently cleared the suppressor, while the side panels cannot be removed or installed with the can in place. I removed the bottom panel, fitted a Pic rail-grabbing bipod, and settled down for 100-yard accuracy testing. I also swapped the MRO for a 1-8x Atibal XP8. Unfortunately I forgot my 10-round Lancer magazine, so used the X95’s included Gen3 windowed PMAG as a rear support in conjunction with a bag. I’m satisfied that the X95 shot this well in 300 BLK — especially with its 1:8 rifled barrel. Most folks would consider a bit of a slow twist rate to stabilize those heavy, slow projectiles. But it did the trick; I didn’t notice any key-holing at 100 yards.

The Tavor was designed for close quarters combat and urban fighting. Four MOA or better is likely the rifle’s design parameter. That’s sufficient for the IDF, which typically fits the gun with a zero-magnification MeproLight M21 or a low-magnification ACOG. With the right loads, I’m confident my X95 300 BLK here will shoot 2 MOA or better. Hogs and bedroom intruders, beware. Compared to the original Tavor, the X95 brings various updates, improvements, and changes. I like the swappable grip modules, love the improved trigger, and appreciate the rail cover panels up front and the location of the front QD sockets. 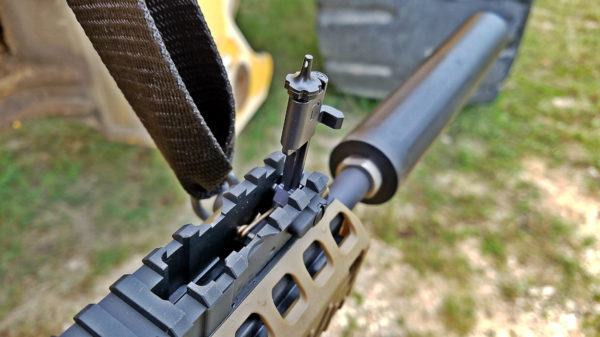 I still prefer the magazine release, bolt release design, charging handle location, and slightly longer length of pull of the original flavor, though. Perhaps I’m just far more used to it. With more practice, I could see myself coming ’round to the X95’s ambi, trigger-finger-activated mag release in particular.

For more details on the changes and included features of the X95, check out Louis’ full review here. Shooting in the rain, running around hitting steel targets, the X95 performed flawlessly. Right out of the box it ran and ran with everything I threw at it, both supersonic and subsonic. Reliably hitting half-size IPSC silhouettes at 100 yards with the MRO wasn’t a challenge. I found the X95 to be far less gassy than my original Tavor. When suppressed, version 1.0 chokes you with gas (people have dubbed the phenomenon “Tavor face”). Thanks to the adjustable gas block and the tuning on the X95 300 BLK, gas was scarcely noticeable — certainly not bothersome. 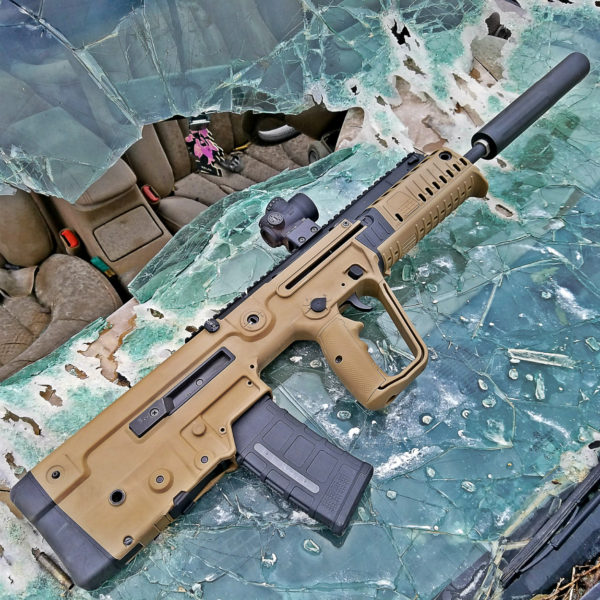 That said, don’t shoot the X95 left-handed without canting the rifle to the right. A solid jet of hot gas and carbon crap comes screaming back out of the ejection port. You don’t want to take it on the chin. Literally. Or straight into your mouth. The Tavor and the Tavor X95 are great battle guns in 5.56. The ability to convert them over to 9mm is pretty cool. But the X95 really shines when fed 300 Blackout. Whether you’re buying a caliber conversion kit for your existing rifle or picking up an X95 in 300 BLK from the get-go, you’ll be a happy ballistic camper. 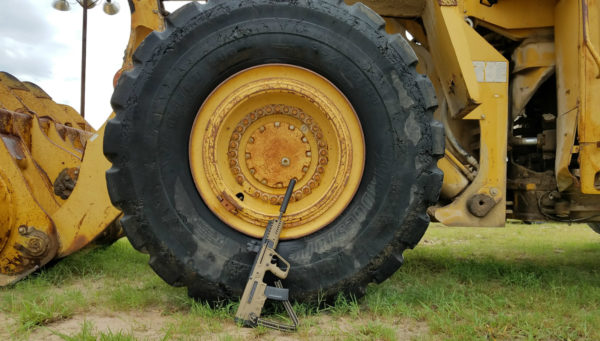 The Tavor X95 is quiet when suppressed. It’s as compact and handy — with great balance — as a non-SBR rifle can get. It’s also as reliable as conflict in the Middle East. The X95 ain’t cheap, but for home defense, survival/bug-out, patrol, hunting and looking cool on the range, it’s a rock solid option. Reliability * * * * *
The X95 ran five brands of subsonic and supersonic ammo without a hitch in the rain and in full Texas sun on a 98° day, straight out of the box. The Tavor’s a stout, reliable platform that’s up for just about anything.

Accuracy * *
Accuracy is sufficient for the intended use and, with some brands/weights of ammo, not half bad. But it tends to string vertically as it heats up. Overall, accuracy is below average, especially for the price.

Ergonomics * * * * *
The Tavor isn’t for everyone. It’s mostly a matter of training and becoming familiar with the manual of arms. Once you “get it,” it works. The controls are in the right places and the rifle’s balance is excellent. It’s extremely compact, efficient, and comfortable.

On The Range * * * * *
In 300 BLK the Tavor X95 is quiet and effective. The adjustable gas block limits blowback and allows the rifle to be tuned, at least to a 2-setting degree, for supersonic/subsonic or suppressed/unsuppressed. Its trigger is improved over the original Tavor SAR’s and most users will be familiar and happy with the magazine release location. It’s a great shooter.

Overall * * * *
The X95 in 300 BLK’s lack of a barrel shoulder is irksome. While it ran well on the “low” gas setting, I’d welcome more than two adjustment options. And accuracy is only “sufficient.” Still, the X95 BLK is one of the most compact rifle options available without a tax stamp. It’s reliable and quiet while shooting a useful, adaptable caliber. It’s a solid four-star firearm.