When Henry Repeating Arms revealed their box-fed lever-action Long Ranger series, I asked to test one in .308 Winchester. Without a round fired, I was impressed and intrigued. Why had Henry departed from its traditional tube-fed designs?

“Because customers asked for it,” Henry GM Andy Wickstrom said, simply enough. The company figured they could make money selling a good product that customers wanted. That’s the long and short of it; the best plan for success and one I rarely see followed. But turning the plan into reality wasn’t easy.

Of course, Henry’s motto “Made in America or Not Made at All” was non-negotiable. Then they had to re-think everything. The company didn’t want to build the same gun as its competition, yet it had to be recognizable as a Henry. So they used familiar grips, slightly modified. The same finishing, with different applications. A smooth action, using an entirely different mechanism. And a totally redesigned trigger.

I’ve taken points off Henry rifles in the past for good, but not great furniture. Not this one. The Long Ranger’s wood isn’t AAA Fancy grade, but it’s well figured and the model tested is at least a Fancy A grade American Walnut…maybe closer to AA.

The stock and fore-end grip areas are deeply checkered with a simple pattern. The wood-to-metal fit is very good, but not perfect. On the model I received, the shoulder stock fit is perfect, but the fore-end to end cap fit isn’t. (If you haven’t fit end caps to rifle stocks and become a neurotic nerd about it, you’ll never notice.) That stock includes a quality recoil pad and sling studs. 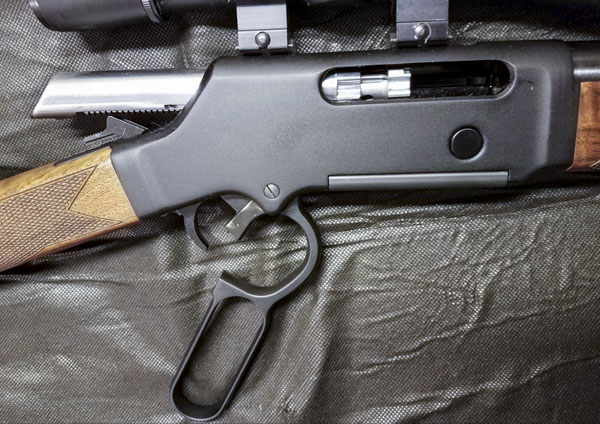 A smooth working action is a Henry hallmark, and this one is no different. Except it is. If anything, it’s better. After spraying a little RAA gun oil into the Long Ranger’s action, I was rewarded with butter-smooth cyling.

The Long Ranger’s action springs open and then quickly engages the exposed hammer to drive the bolt rearward. In fast action, the bolt’s about a thumbs width from my nose — if I keep a good cheek-stock weld. Thanks to that easy cycling action, that weld is easy to maintain.

I can cycle the Long Ranger with just my pinky, without any pause. In fact, with the hammer back, if you point the rifle in the air and “break the seal” on the action, the rifle will open completely on its own with just the weight of the bolt. A bolt that’s chromed steel with a six-lug rotary head.

The Long Ranger doesn’t have an external safety. If you want to safe the weapon after cocking, gently release the hammer. Similar to the traditional Henry lever guns, the Long Ranger employs the proven in-hammer sliding transfer bar as a safety. When you pull the trigger, the rifle will fire. That’s the only time. The Long Ranger’s magazine fits flush into the bottom of the action. It’s released via a black, flush-fit round button. The magazine to metal fit was excellent. There’s no wiggling or odd angles to get the magazine to sit or release. Just a press on the slightly curved bottom of the magazine and an audible and tactile click lets you know it’s locked in. It releases with any solid push of the button.

The Long Ranger ships with one magazine (I’d certainly buy another). The lever-action rifle’s trigger is a huge improvement over many other lever guns. It’s just as good, if not better than most of the bolt-action rifles in this price range. After the teeny tiniest bit of pre-travel it breaks cleanly, at what I’d guess to be between three to four pounds.

The model tested was set up for a scope. There’s no front sight and the barrel isn’t cut for one. The receiver is already drilled and tapped and a two-piece Skinner rail set comes installed.

The Long Ranger’s stock geometry works for a scoped gun that’s meant to be hunted. Although the drop and length of pull is similar to traditional Henry models, the Ranger’s straight grip is shorter and the comb is considerably higher. The resulting rifle shoulders quickly and delivers a full view of the scope and reticle to my eye.

If I was going to use this gun from a rest most of the time, I’d opt for the lowest rings I could get. Reaching the hammer wouldn’t be a problem; Henry supplies a hammer spur with each rifle. If you want to use the rifle for snap shooting or firing from the kneel or off a tree, stick with medium height rings. Of course, your body’s geometry will determine how you set the gun. For those of you who prefer iron sights, Henry makes a version with sights included. For me, a quality scope in fixed four or six power will suffice in magnification for hunting, and likely be more durable than I’ll ever need. I stand by the old rule of 1X per 100 yards for hunting rifles. The gunmaker’s brain trust decided to chamber the Long Ranger in the three most requested calibers: .223, .243, and .308Win. Next year they’ll branch out to other calibers. And why not? Henry’s already adding machine capacity to meet booming demand. Again, I chose .308 Win.

The Long Ranger lever gun was as reliable as any bolt action rifle I’ve ever shot. Shooting 250 rounds of mixed ammunition revealed no failures to load, eject, fire, etc. The magazine holds four rounds, (4+1). It loaded and unloaded easily, and never gave me any issue locking into the rifle. For the first 215 rounds, I didn’t clean the rifle in any way. The Long Ranger gave me no problems of any kind, with one exception. After firing 210 rounds through the gun, into my second round of accuracy testing, the HPR 150gr  TTSX BT cartridge was very tight in the chamber. It was the only round where I hand to change my grip and really tug on the lever to get the round to eject. There were no pressure signs on the brass or primer. Measuring the round at 2.705″, it’s the shortest round I tested, and although within SAAMI spec, a little over 1/10″ shorter than Barnes lists for that bullet.

After five rounds, I measured the group, then continued the testing with other rounds. I then cleaned the entire rifle, and tried the round again, with the exact same results. That round was very difficult to eject, no others were. The group with that round was also almost twice as large as some others. I’m intrigued, but the simple answer is that I’ll stay away from the HPR ammo with this rifle.

That HPR round scored a group size of 1 3/4″. That’s a five-shot group from 100 yards, all bagged up (as were the others). For the accuracy testing, I pulled the 6X fixed scope off and used a Vortex Viper 6-24X scope, set at the 24X setting. I took two days to do the accuracy testing, and I took whatever time it took to pull the trigger. (Not exactly hunting conditions.) That 1 3/4″ was the worst of the group, and frankly, good enough for most hunting. The gun did much better with other rounds. Using Remington’s 168gr Hog Hammer round topped with the Barnes TSX bullet, the gun scored an average of 1.25″ after four five-round groups. The inexpensive and commonly available Federal Premium 168grain SMK cartridge scored an extremely consistent 1″ group after fully 10 five-round groups. It outperformed the hand load I built to replicate it by a tenth of an inch — all done on a filthy dirty bore.

The five-shot group was particularly telling on this rifle, Many of my three-shot groups were well under one MOA. But 100 yard five-shot one MOA groups with factory rounds from a lever-action rifle is outstanding. I was expecting 1.5 to 2MOA. I was not expecting a Minute of Angle rifle in western guise.

Although that accuracy from the bench is great, this Long Ranger’s real joy is from other positions common in the field. At only seven lbs, with a 20″ barrel, this really is a walk-all-day and shoot-all-day rifle. It’s handy in the brush, but can reach way out there down power line cuts and into the fields when you need to. If you need fast follow-up shots on sounders of running pigs, this rifle will do it. One of the true do-it-all affordable rifles.

I shoot a lot of guns for TTAG. Most of the time, it’s an assignment, and it’s work. Usually, I’m happy to turn a gun back into the office and get my next assignment. This one is different. The Long Ranger is a must-have for me. It will be hanging above the door real soon.

Style, Fit and Finish * * * * *
The Long Ranger’s bluing is well executed, the checkering is both functional and appealing, and the wood is far better than I would expect at this price range. Little features — how the round magazine release blends into the flat receiver, the bolt’s finish, and the checkering and quality of the wood itself — shows that Henry’s paying attention.

Accuracy * * * * *
I own some two dozen bolt guns. Of all of them even remotely in this price range, only one, the heavier and [$100] more expensive Ruger Hawkeye Predator in 6.5 Creedmor, matches the Long Ranger in out-of-the box accuracy.

Reliability * * * * 9/10th
It may not seem fair to take off anything for what amounts to a sticky bolt, but there’s perfect and there isn’t. But to be perfectly clear, 250 rounds went into the gun, 250 rounds went out the barrel, and all of them fired well.

Overall * * * * *
The American-made Henry Repeating Arms Long Ranger shoulders fast and points like a stick. It’s MOA accurate and oh-so-pretty pretty. The best part: it’s not a bolt gun or an AR. Win.