Fall’s almost here. I’ve been out in the not-quite-so-superheated Texas air, testing the next contender in my Perfect Truck Pistol series: the .45-caliber FNX-45 Tactical. For those who don’t remember how this whole thing started, I need a pistol that can reliably and ethically take game, but serve as a concealed carry firearm during short trips to town. After pushing 400 +P rounds of both handloaded and commercial ammunition through the FNX-45 Tactical, I was impressed . . . 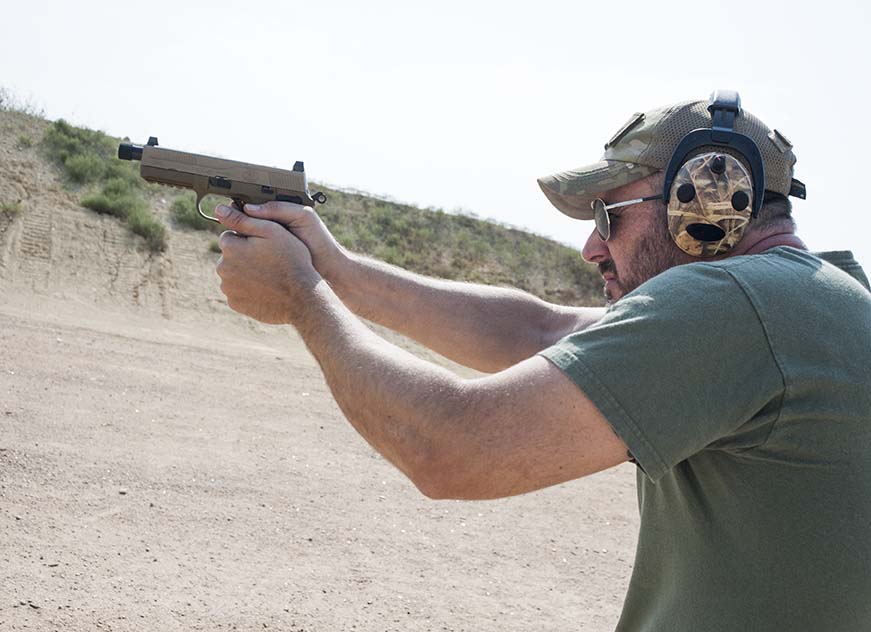 The FNX-45 Tactical looks and feels like a beefed-up CZ97B. I’m a huge fan of that chunk of Czech goodness, so I wasn’t surprised that FN’s Belgian-descended baby fit my hand well, with all the controls easily within reach. I should say I wasn’t surprised much. The FNX-45 Tactical looks huge. With its knobby rails, high sights, long grip, rounded magazine bottom and barrel extension, fitted with the large backstrap, the FNX seems like it belongs to a giant action hero.

The FNX doesn’t feel big. My fingers get a better grip and I have a farther reach on its trigger than I do with my Wilson Combat Beretta 92FS. The FNX-45 Tactical is the perfect size – for bear-pawed me – to get a solid wrap around the gun. Shifting my grip to manipulate the controls was as easy as Paris Hilton after two cocktails.

The FNX-45 Tactical’s decocker is its safety. All the way up for safe, one position down for fire, and all the way down to decock the gun. I like to ride my strong hand thumb on the safety to get as high a grip as possible; I was worried my grip would decock the gun. After hundreds of rounds, right- and left-handed, it never did. Oh, and the gun is completely ambidextrous. 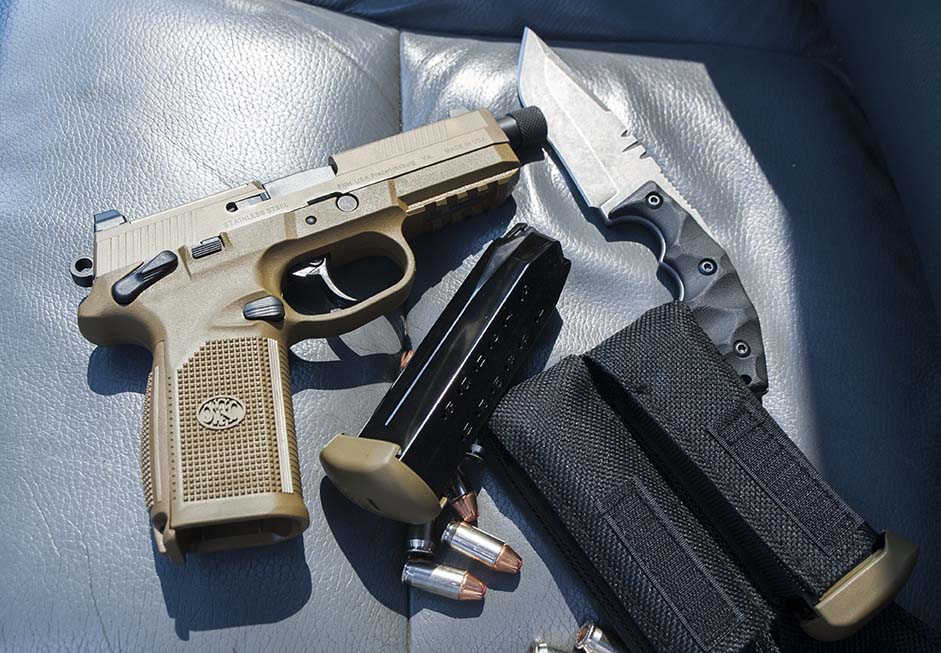 An unloaded FNX-45 Tactical tips the scales at 33 oz. Almost all of the weight is in the slide. So while the FNX-45 Tactical weighs slightly more than the 10mm GLOCK G20, it has a much milder recoil profile. Shooting standard pressure Winchester White Box .45ACP out of the FNX-45 Tactical is almost as comfortable as shooting 9mm out of a full-size pistol. Yes, but … launching a 230gr round at 850fps isn’t what I want out of this pistol. That round is likely to leave pigs to die another day. To see if the FNX-45 Tactical’s a good hunting pistol, I had to speed things up a bit with some hotter loads.

I did all of my shooting either from a kneel or shooting off a bean bag I keep in my truck for just such emergencies. The commercial ammunition delivered perfectly satisfactory accuracy. Remington’s Golden Saber +P round printed 3″ groups, as did Hornady’s. Shooting DoubleTap 255 gr SWC at 875 fps through the FNX-45 Tactical from my truck, I was consistently getting 2 3/4″ groups. Sold!

This load gives me just about 400 ft-lbs of energy at 50 yards – enough accuracy to shoot a 6″ group at that range. That makes the FNX-45 Tactical a legitimate brush hunting gun for hill country deer, pig, or javelina. It also got me thinking about hand loads for the gun. Since I had decided that I’d buy the gun, I didn’t worry too much about breaking it. So I did quite a bit of load development for it. I fed the FNX with hand loads all the way up to a 255gr SWC at 900 fps. (Some of those are pretty stout, to say the least.) This pistol performs well with heavy Oregon Trails SWC pills and manages recoil surprisingly well. That frame-pounding 255 gr hand load above printed 1 1/2″ for my best groups off a bag on my window. I got the same group size for two other +P hand loads that were not quite as hot and not quite a punishing on the case or the frame.

I played with four different bullets, four different powders and lots of different OALs. I spent some nine hours on the range and a lot more time at the reloading bench. But that level of accuracy delighted me. No offense to the good folks at FN, but the FNX-45 Tactical rattles like a toolbox and the frame feels like a toy. And yet it shoots a stout .45ACP by any standard quiet well. Shooting off my truck with the bean bag out to 50 yards, I put eight out of 10 rounds inside a 6″ circle without much difficulty. 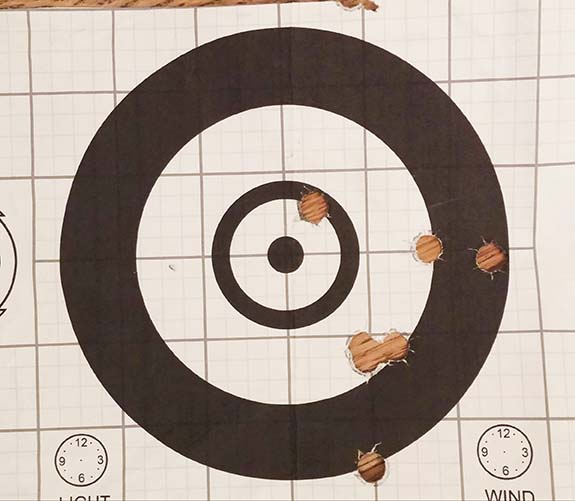 The FNX-45 Tactical’s reliability was unimpeachable – after the first week. When I first took possession of the gun, I broke it down and cleaned it as per the instructions. On a full magazine, it had repeated failures to feed – both first rounds a subsequent rounds – but only for the first f0ur or five rounds in each of the three standard magazines. I was ready to give the gun a big fat zero for reliability. But a couple of people on an FN fan site suggested a fix: sit the gun down with the magazines full for a week. I was dubious, but there was no harm in trying. After a week’s time out I shot the gun again. I have no idea why that worked, but that fixed all my feeding problems. I had no failures with any of my home-brewed formulations or with any commercial loads. Well, save one.

The Hornady Critical Duty round generated occasional failures to feed, both first round failure to feed and simple failure to return fully into battery. I should also note that in the multiple range trips with this gun over about a month and hundreds of rounds – some of questionable safety – I never cleaned the weapon. I put more than 400 rounds of various +P rated rounds through the gun and at least several hundred standard pressure rounds through it without issue, save the Hornady round. The only significant criticism I have of the gun: the trigger reset. Not the trigger itself; the double action pull of the FNX’s trigger is heavy (10 lbs, as advertised). But it’s fairly smooth with minimal stacking. Like the FN pistols I tried at the Texas Firearms Festival last year, I was taken with the quality of the double action trigger. I played with it back and forth against a S&W Model 29 and I have to say the FNX-45 feels just as good as the bangswitch on the big revolver, with only a slightly heavier pull.

The single-action pull is, naturally, much lighter. (I plan on carrying the gun cocked and locked.) But there’s that reset. It’s way too far forward for me. Once I started moving faster, the reset slowed me down, not recovering the sight picture. If this was my only gun, I could train myself out of it, but it would still be slower than it should be. As I’m buying this gun, I’ll also be looking for a way to shorten up that reset with an aftermarket part or a good gunsmith. Despite great ergos, reliability and accuracy, the FNX-45 Tactical is not the Perfect Truck Pistol I’m looking for. I can’t conceal it well. I couldn’t find an angle where the gun was comfortable and concealed in either a home-made Kydex OWB nor leather IWB rig. That handle, with its big round butt, just seems to stick out no matter what.

That said, this pistol will certainly be going hunting. For pigs, this is the pistol. I wish I could make the period at the end of that sentence have more emphasis. Since so much pig hunting is done at night, the stock tritium sights, light rail and threaded barrel make it night time spot-and-stalk-ready right out of the box.

A new can for this pistol should finally clear the ATF in the coming month. When that happens I have no doubt the FNX-45 Tactical will get regular use for the nighttime elimination of my porcine prey. Full report to follow.

Style * * * *
The industrial look is not my thing. On this tan/coyote model, the tone of the slide doesn’t really match the tone of the frame. But knowing me, I’ll end up rattle canning the whole thing anyway. On the (very much) upside, the gun came in an exceptional case, holding everything in place,with space for three magazines as well as ammo and a suppressor. The case earns the gun a star on its own.

Customization * * * * *
I’d add more stars here if I could. Add anything you want on the front rail, exchange the supplied multiple back straps, put on the optics you want with the supplied exchangeable mountings, and the gun comes in two different finishes. It’s threaded out of the box.

Reliability * * * *
I had to take a star off for the initial feed problems. It baffles me how leaving the mags fully loaded for a week cured feeding issue, but after that the firearm performed [nearly] flawlessly, even with a wide variety of hand loads.

Accuracy * * * *
Factory loads shoot 2 3/4 to 3″ with some pretty stout +P rounds. And that’s not even off a “proper” rest. Playing with hand loads leads to outstanding precision.

Overall * * * *
Accuracy, reliability, ergonomic excellence, fifteen round capacity, tritium sights and suppressor-readiness makes the full-size $1300 FNX-45 Tactical a superb value. This is my first FN firearm. Based on my experience with this one, it won’t be my last.